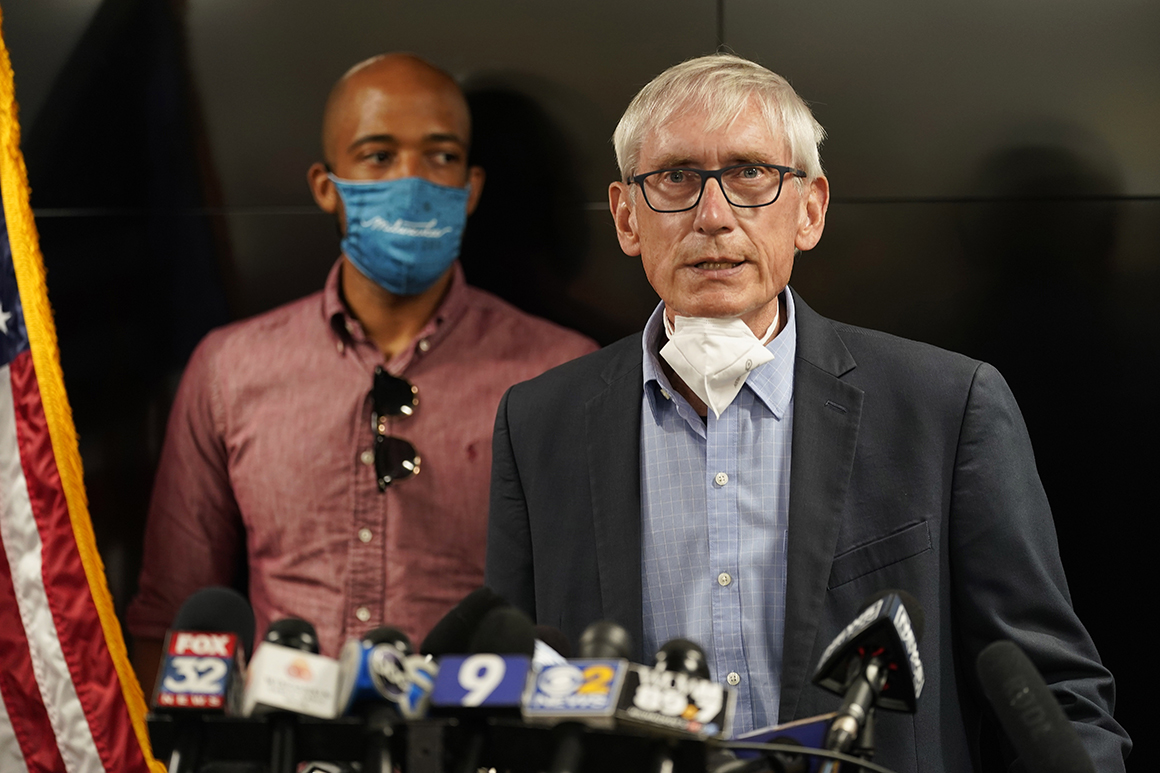 “I don’t think that he has his pulse [on] what is going on in this state. He doesn’t have a forceful personality. He doesn’t have, in my view, the qualities of a great leader and that’s what we need now,” said Terry Rose, a former county supervisor and Democratic Party chair in Kenosha County. “We need a Winston Churchill, not a Neville Chamberlain.”

Democratic infighting in Wisconsin broke out in April, when Evers initially refused to call for a postponement of the primary election just as the pandemic was blossoming. When he finally did ask for a delay, Republicans shut him down.

That’s how most of Evers’ clashes with state Republicans have gone: GOP legislators gavel in a special session he’s called, then they ignore his proposals or file lawsuits to block him with the conservative-led state Supreme Court.

Numerous Democrats complained in interviews that Republicans are running roughshod over Evers, including during the Covid-19 crisis.

“Is he governing? Because it doesn’t feel like it,” said one Democratic party activist, who requested anonymity to express his frustrations with Evers candidly.

Control of Wisconsin’s governorship has provided an edge to Democrats in the past. Former Wisconsin Gov. Jim Doyle, a Democrat, recounted in an interview how his political machine helped John Kerry and Barack Obama carry the state in 2004 and 2008, respectively.

“In both of those elections it was really my political organization that was kind of at the heart of where most of the work was done — most of it was ground work,” Doyle said.

That’s not going to happen this time. Whatever power a governor’s political operation might have supplied in 2020 is greatly diminished, Doyle said, largely because Covid-19 curbed in-person politicking by Democrats. Republicans, though, have taken part in door-to-door persuasion. “When you don’t have this huge ground game, it’s a different kind of atmosphere,” Doyle said.

Biden holds a mid-single-digit lead in most recent polls of the state.

Evers’ lack of political prowess was well known when he ran for the office. He spent his career as a school administrator, rising to state superintendent of schools before running for governor. Frustrated by Walker’s approach to school funding — and emboldened by his landslide win in the superintendent election — Evers challenged the two-term incumbent despite his relative lack of political experience.

The top spokesperson for HHS, Michael Caputo, says he’s taking a leave of absence for health reasons — less than a week after POLITICO first reported that he was interfering with CDC reports on coronavirus.

“He’s a competent, able administrator. He’s had baptism by fire in politics,” said Dale Schultz, a Republican who served more than three decades in the Wisconsin legislature. “I think he’s held up pretty well. If there’s a criticism, he hasn’t been able to establish a relationship with Republicans. That’s too bad, but I’m not certain that that’s even possible.”

Politically, Evers has been devoting time this year to a Democratic initiative to keep Republicans from winning a veto-proof supermajority in the statehouse. But an aide said the governor is also focused on helping Biden.

“The governor has spent his first two years in office working with the Democratic Party of Wisconsin to help build a sustainable party infrastructure from organizing to fundraising, raising millions into the [Democratic] Party,” Evers spokesperson Britt Cudaback said. “We know the road to the White House runs right through Wisconsin, and our efforts the past two years will be critical to making sure we elect Vice President Biden and Democrats up and down the ticket this November.”

Kelda Roys, a Democrat from Madison who recently won a primary for a state Senate seat, said Evers is well liked by voters because of his sensible approach to issues, which she said makes Republicans look like obstructionists.

“Evers has very high approval ratings, [partly] because of how poorly the Republicans have behaved in the legislature,” said Roys, who called Evers “a measured, thoughtful, reasonable person.”

Evers’ handling of the coronavirus, which included a statewide order to wear masks, has consistently received strong marks from voters; his poll numbers saw an uptick in the early months of the pandemic. Even after the Kenosha unrest, Evers posted a 51 percent job approval in the latest Marquette Law School poll.

“It isn’t that he has cratered, it’s that he’s gone back to the levels of January and February,” said the poll’s director, Charles Franklin. He noted that even in those early months, Evers had higher job approval ratings than Walker typically had while governor.

But Evers lost ground in the marquee state poll from August to September, which is when the unrest in Kenosha began.