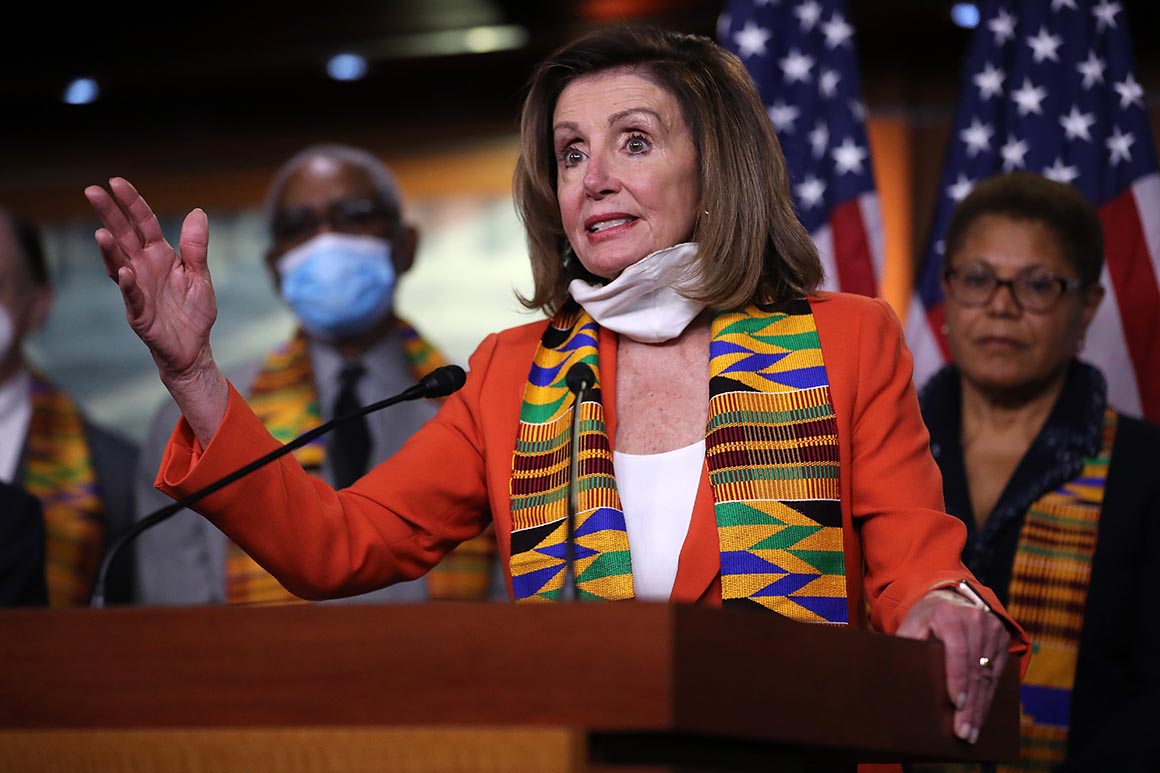 “What we saw in Minnesota — the slow, torturous murder of George Floyd by a uniformed officer — was an outrage and a tragedy. What we have seen since then — millions of Americans marching in the streets to demand justice and call for reforms — it has been an inspiration,” Bass said.

The House will return to Washington to vote on the bill June 25, a week earlier than initially planned, Democratic leaders informed their members Tuesday. It’s a speedy timeline, by Congress’ standards, for Democrats to coalesce so fully behind sweeping legislation that would crack down on excessive force, enforce strict transparency standards and demand accountability for officer misconduct.

Much of the package had been drafted by the Congressional Black Caucus, by members who have sought changes to policing for decades. Those senior black leaders — led by former CBC chairman and chief deputy whip G.K. Butterfield (D-N.C.) — have now taken the lead on the Democrats’ whipping operation, going delegation by delegation and locking down supporters at a rapid clip.

That includes intense outreach by the CBC to certain House Republicans, specifically,retiring Rep. Will Hurd of Texas, the sole black GOP lawmaker in the House. Hurd has been open to some of the Democrats’ proposals and joined a demonstration in Houston to honor Floyd.

“Let us at least try to be bipartisan or nonpartisan as we deal with this,” Pelosi told CNN on Wednesday. “But if we cannot, reaching across the aisle, trying to find a common ground, if we cannot, we must go forward with the strongest possible legislation to make the biggest possible difference because we must make change.”

House Republicans have criticized Democrats for moving ahead on a bill without their input. Democrats, however, counter that Republicans will have plenty of chances to offer changes during a committee markup next week.

Senate Republicans have mostly ignored the bill, choosing instead to draft their own proposal and criticizing the more controversial provisions in Democrats’ bill, like ending a policy known as “qualified immunity” that shields police officers from civil lawsuits.

“I don’t see how any of those things get to the finish line,” Sen. Tim Scott (R-S.C.), the lone African American Republican senator, who is taking the lead on the GOP bill, said Thursday when asked about Democrats’ bill.

The White House is tentatively planning to endorse Scott’s measure and is drafting an executive order that offers a framework for the White House’s police reform goals, including language that could bar or limit chokeholds.

But Democrats say they have been encouraged by some potential signs of bipartisan dealmaking, including contact between Bass and senior officials in the White House.

In addition, the nation’s largest police union, the Fraternal Order of Police, released a statement Tuesday night saying they were “heartened” at some aspects of the bill — short of a ringing endorsement, but a signal that they’re willing to engage in the process.

The Democrats’ package has run into remarkably little resistance from its own party, which has historically faced some internal divisions between the caucus’ liberal left flank and more centrist moderates over how to approach law enforcement issues.

The bill, while expansive, doesn’t go nearly as far as some activists have demanded and steers clear of the national fight over “defund the police.” Senior Democrats this week tamped down talk of the idea, lest it gain steam and overshadow their reform bill. President Donald Trump and Republican campaign operatives have also used the slogan to paint Democrats as anti-police.

Few, if any Democrats, are expected to oppose the bill, and most will declare their support by early next week, according to multiple sources. That includes dozens of vulnerable lawmakers who represent districts Trump won in 2016 — and will again be on the ballot with him in just six months.

Democratic leaders have been keeping close tabs on the caucus’ most moderate members, several of whom were initially hesitant to support the bill for fear of blowback from powerful police unions. Bass held calls with the New Democrat Coalition and Problem Solvers Caucus last week before the bill’s introduction. And House Majority Leader Steny Hoyer also talked to the Problem Solvers on Wednesday.

The legislative push comes as Democrats held their first hearing on police brutality on Wednesday. In a cavernous room in the Capitol, Philonise Floyd delivered forceful testimony about his brother’s killing at the hands of a white officer in Minneapolis more than two weeks ago, which drove millions into the streets to demand changes at the highest levels. Before his testimony, Pelosi — who personally escorted him to his seat — assured him the police reforms bill would pass her chamber, when he asked.

“The real question is, do we care? And I believe this legislation is a good piece of legislation that moves the ball forward,” Rep. Cedric Richmond (D-La.), a top adviser for presidential nominee Joe Biden and a previous CBC chairman, said at the hearing on Wednesday. “It is very easy to sit on the other side and let perfection be the enemy of good. Or just sit back with inertia, and we never move the ball forward.”

Some swing district Democrats have privately worried about some parts of the bill — like abolishing the “qualified immunity” doctrine — and the blowback from influential police unions that would likely follow. White House press secretary Kayleigh McEnany again called ending qualified immunity a “nonstarter” on Wednesday although some libertarian-leaning Republicans have expressed openness to the idea this week.

Other Democrats still fear the package could be weaponized by the GOP as anti-police, at a time when Republicans are seizing on activists’ chants to “defund” or “abolish” the police. The GOP’s tactics were on display at Wednesday’s hearing, though Democrats have almost universally dismissed those efforts.

“It will put their lives at risk, won’t it?” Rep. Jim Jordan (R-Ohio) said of the “defund the police” efforts as he questioned a GOP witness at the hearing. “Just as importantly, because life is precious, it will put people’s life at risk in the communities those law enforcement officers serve.”

Still, some moderate Democrats have privately prioritized supporting the bill over local politics, calling it, instead, a vote of conscience, according to multiple sources familiar with their decisions. For one member, it was the first time they hadn’t first run their position by local police unions — a rarity for an endangered Democrat.

Several vulnerable members like Rep. Abby Finkenauer, who represents eastern Iowa, and Antonio Delgado, who represents upstate New York, signed onto the bill this week. Many more of the Democrats’ so-called “frontline” members are expected to announce their support before next week’s markup — with a clear message that Democrats are not defunding or abolishing the police.

“There is nothing in the bill that zeroes out police budgets. Nothing. When you’re hearing folks talk about this piece of the conversation, it’s a strong one. But let’s focus on exactly what the bill does,” Delgado, the first black member to represent upstate New York, told MSNBC on Wednesday. “Let’s not focus on the noise.”

Bass said it was actually a good sign Republicans were focusing so heavily on the “defund the police” chatter and not the actual substance of Democrats’ bill.

“They’re talking about defunding the police. The bill has nothing to do with that,” Bass said Wednesday. “That doesn’t have anything to do with what we’re doing. So to me, that means [I’m] hopeful that, you know, we might be able to get some support.”

Jake Sherman and Melanie Zanona contributed to this report.