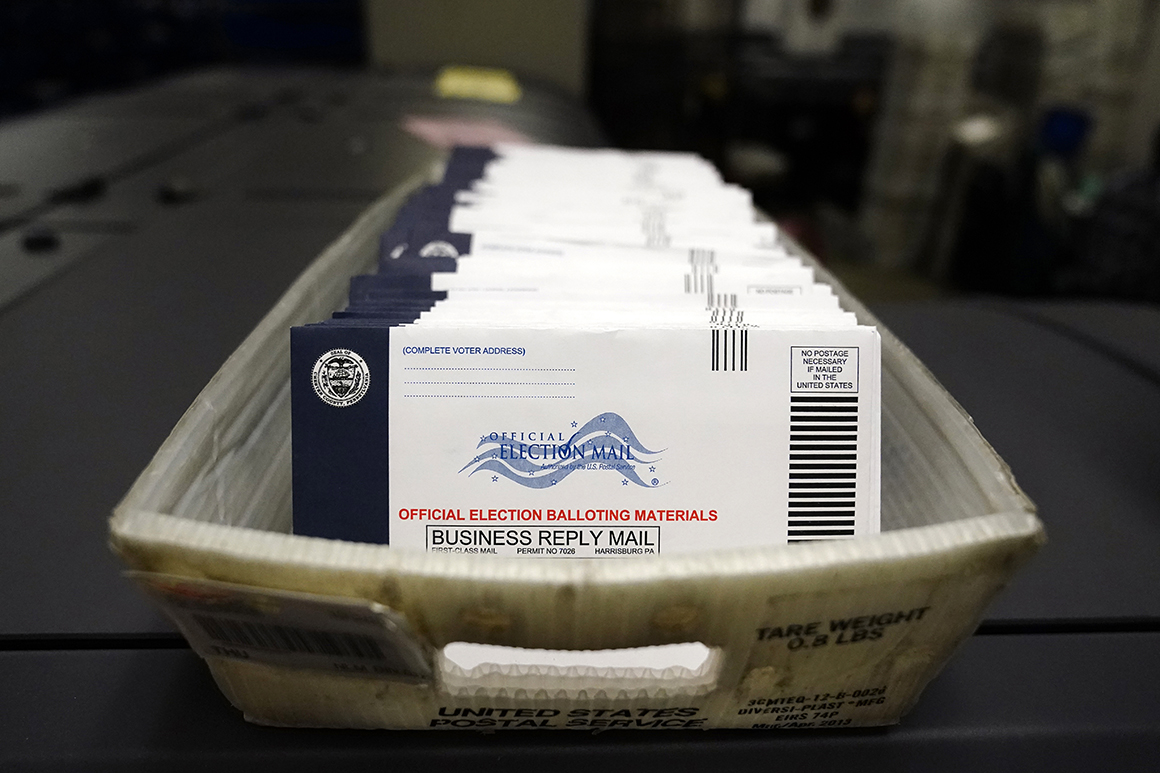 “Bank it, bank it, bank it. Bank it!” Pennsylvania Lt. Gov. John Fetterman, a Democrat, said in an interview, urging voters to cast their ballots now and to not wait. “If you have a ballot, deliver it to a secure ballot box. Don’t mail it in. I am not advocating at this point to trust mail.”

“We are too close to Election Day, and the right to vote is too important, to rely on the Postal Service to deliver absentee ballots on time,” Michigan Secretary of State Jocelyn Benson, a Democrat, said in a statement. “Citizens who already have an absentee ballot should sign the back of the envelope and hand-deliver it to their city or township clerk’s office or ballot drop box as soon as possible.”

Ballots are due in Michigan by close of polls on Election Day.

In Wisconsin, Democrats are ramping up their get-out-the-vote campaign in light of the Supreme Court’s ruling. Top Democrats in the state said the ruling didn’t surprise them, and that they were preparing for the eventuality that the Supreme Court would ultimately decline to extend the return deadline in the state.

“We did not put our hopes and dreams for the future in the hands of [Justice] Brett Kavanaugh.” said Ben Wikler, chair of the Wisconsin Democratic Party. “We expected and planned for it. If the Supreme Court had done the right thing, it would have been a bonus for democracy. But it wasn’t something we were counting on.”

Wikler noted that before the ruling, the party was already instructing voters to return their ballots via drop boxes instead of the mail. But the messaging will have “new urgency” going forward: “Now we can say the Supreme Court just ruled, you got to get your ballot into the drop box today,” Wikler said.

The Supreme Court’s decision on the Wisconsin case left some hints about how the Court could rule in lingering cases. In a concurring opinion issued Monday night, Kavanaugh argued that there is a role for federal judges to intervene in state courts’ electoral rulings, citing, in part, former Chief Justice William Rehnquist’s concurring opinion in Bush v. Gore. That concurrence, in the case that effectively decided the 2000 presidential election, argued the Constitution deferred specifically to state legislatures with setting the terms of elections, and that the Florida Supreme Court overstepped the boundaries of its role.

“Under the U.S. Constitution, the state courts do not have a blank check to rewrite state election laws for federal elections. Article II expressly provides that the rules for Presidential elections are established by the States ‘in such Manner as the Legislature thereof may direct,’” Kavanaugh wrote in a footnote in his decision, emphasizing legislature. “As Chief Justice Rehnquist persuasively explained in Bush v. Gore … the text of the Constitution requires federal courts to ensure that state courts do not rewrite state election laws.”

Kavanaugh’s footnote laid a marker down for how he would rule in future cases, said Tom Spencer, a Republican lawyer who worked on Bush v. Gore team and is now the vice president of the conservative legal group Lawyers Democracy Fund.

Currently, both North Carolina and Pennsylvania have extended ballot return deadlines due to court orders. In Pennsylvania, ballots that are postmarked by Election Day can count if they arrive within three days (as opposed to being due at close of polls). In North Carolina, Election Day-postmarked ballots can arrive up to nine days later and still be counted (as opposed to three days).

“He specifically said that the Constitution requires federal courts to ensure that state courts do not rewrite state election laws,” Spencer said. “The sentence could have gone on ‘like Pennsylvania, folks.”

Spencer also said he anticipated that new Justice Amy Coney Barrett, who officially started her duties on Tuesday, ultimately would side with Kavanaugh. Spencer suspected Kavanaugh was writing to her in his Wisconsin opinion.

“My crystal ball says that this last sentence [in Kavanaugh’s footnote] could be a shoutout to Justice Barrett,” Spencer said. “It’s just a prediction — she’s a very careful, brilliant woman — but my view is that she would look at all of this and come down as Kavanaugh did.”

But Democrats say they had already flipped messaging to encouraging voters to vote early in-person or to return their ballot via the drop box, regardless of how the Supreme Court may rule in future cases.

“The second you saw the Supreme Court rule four to four, you knew where it was gonna probably go,” Fetterman said, referring to a divided decision earlier this month where Chief Justice John Roberts joined the court’s liberal bloc and did not suspend a Pennsylvania Supreme Court order extending ballot return deadlines. “What the Supreme Court does doesn’t matter, if you just get your vote in, the way they need to get in.”

Republicans have again asked the nation’s highest court to rule on the Pennsylvania case, this time on the merits and not an emergency attempt to block the state court decision.

Like in Wisconsin, Democrats in North Carolina and Pennsylvania say they aren’t waiting for the Supreme Court to potentially hand down a last minute ruling. If anything, they say, the urgency in this year’s election was already incredibly high and the ruling won’t change much.

“There’s no real strategy change, but there will be more urgency, if you can get more urgent in this election cycle,” said Morgan Jackson, a Democratic strategist in North Carolina who works with Gov. Roy Cooper and Senate candidate Cal Cunningham. “We’re just keeping on keeping on.”