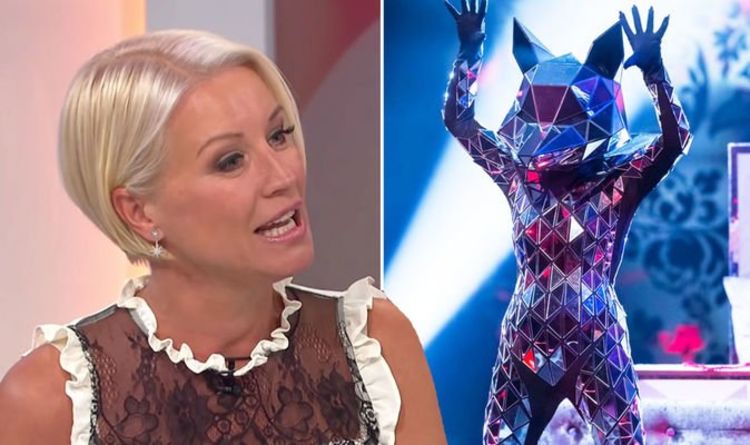 Television star Denise Van Outen, 45, has been linked to The Masked Singer UK in recent weeks, with many believing she is the hidden celebrity behind the fox mask. The Masked Singer UK features celebrities singing in disguise behind head-to-toe costumes and face masks, which hide their true identities.

Fans of the show are convinced clues on the show reference moments in Denise’s career.

In one VT, the fox was seen walking on the streets of London as she discussed spending time in the East End.

Viewers believe this clue is linked to the time she starred in EastEnders back in 2015.

Another clue saw the hidden celebrity opening up a note from Andrew Lloyd Webber, who reworked one-woman show Tell Me on a Sunday for the actress.

The celebrity in question was also seen opening up a note which read, “Break a leg”.

Denise famously fractured her ankle while training for a role in Chicago in 2018.

Despite the clues, Denise has denied she has any involvement with the show.

Speaking to press at The Sun Military Awards earlier this week, she said: “I’ve had so many messages, but that was filmed when I was in Australia last year.

When asked if she’s the fox, she replied: “No.”

Her partner Eddie Boxshall chimed in: “She hasn’t crept out of the house!”

Despite denying the claims, the actress revealed she will be on Loose Women next week, but didn’t reveal the reasons behind her upcoming appearance.

Celebrities who have been unmasked on the show, such as Jake Shears, have gone on to speak about their time on the show on Loose Women.

Fans have been sharing their thoughts about Denise appearing on the show on Twitter.

One user wrote: “So this fox is definitely Denise Van Outen, right?”

“She was a judge on Any Dream Will Do that Andrew Lloyd Webber did, and had a child with Lee Mead who won the role as Joseph! #maskedsingeruk.”

Denise did take a break from the UK to star in Australian soap Neighbours last year.

Herself and Eddie have also been keeping busy on the celebrity version of Gogglebox.