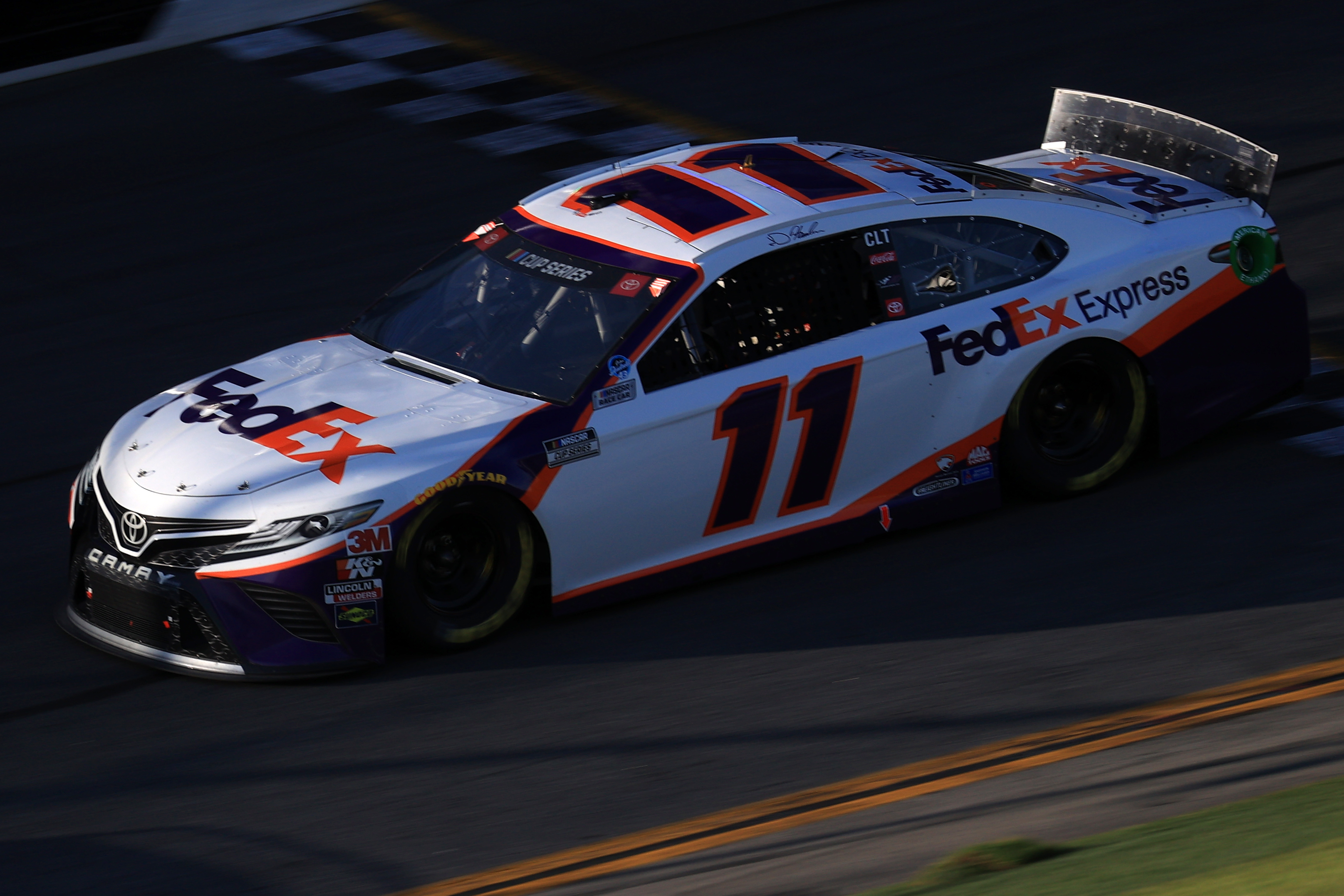 Denny Hamlin’s bump-and-run virtual victory in the North Wilkesboro 160 at historic North Wilkesboro Speedway on Saturday afternoon bookended an impressive showing by him in the eNASCAR iRacing Pro Invitational Series.

The race also served as a competitive send-off before the marquee NASCAR Cup Series resumes next weekend at the very real Darlington Raceway (Sunday, May 17 at 3:30 p.m. ET on Fox, MRN and SiriusXM NASCAR Radio).

Hamlin, who drives the No. 11 Joe Gibbs Racing Toyota, also won the eNASCAR iRacing Pro Invitational Series inaugural race at virtual Homestead-Miami Speedway seven weeks ago. That event kicked off a fun, well-received series of virtual races as the sport took time off during the COVID-19 pandemic.

HAISLOP: ‘Cars 3’ brought the ghost of North Wilkesboro back to life

This weekend, Hamlin had to nudge Ross Chastain’s car in the waning laps to take the checkered flag, holding off one of iRacing’s best, Timmy Hill by 0.914 seconds to claim a dramatic second win. Hamlin joins Hendrick Motorsport’s William Byron, a three-time race winner, as the only two multiple-time race winners during the eNASCAR iRacing Pro Invitational Series competition.

“Talk about a bump-and-run, it’s a textbook way to do it, move him out of the groove but you don’t wreck him,” Hamlin said of his battle with Chastain, who spun Hamlin in retribution on the virtual cooldown lap.

Smithley, Brennan Poole, Parker Kligerman, Kevin Harvick and Landon Cassill rounded out the top 10 in what was a high-action day at the historic venue’s iRacing debut. The race was essentially made possible by Dale Earnhardt Jr., who led the charge in getting the 0.625-mile oval on the iRacing platform, which opened it up for its first competition Saturday.

It was a busy day on the track, with eight caution periods for 53 laps. NASCAR Cup Series rookie Christopher Bell led a race-high 61 of the 160 laps before finishing 14th in the Leavine Family Racing Toyota. Chastain led 31 laps and Hamlin was out front for 24 laps.

Hamlin conceded that getting the last win before returning to regular-season competition was a boost in confidence. Prior to the break in the series schedule, Hamlin had already earned his third Daytona 500 victory in the season opener and was ranked 11th in the championship points standings with his Playoff ticket already punched.

“I can only speak for me, but yeah, sure, I’m way more excited than if I wouldn’t have won,” Hamlin said. “Winning the last iRace, the first and the last one, it’s significant.

“We have millions of people watching. It’s good publicity for my sponsors. It’s good for me and my confidence.

“We know, every driver knows, that everything is equal. There is no advantage for anybody. It’s about who can hone their craft in iRacing.

“IRacing, we can always talk about it doesn’t relate, this, that and the other. In some ways it won’t and it doesn’t. But you have to use the same techniques that make you good in iRacing that make you good in real life. It’s not like playing Madden or NBA 2K where you’re using your hand-eye coordination pushing the buttons. You’re using the gas, brakes, running two at the same time, steering wheel. Everything is the same.”

“I take pride in that,” Hamlin continued. “Hey, if everything is equal, [and] I’ve won a couple times, [then] I feel pretty good about where I’m at as a driver. Certainly, I think there’s some confidence that will spill over for a few weeks.”

Regular competition will resume with a 400-miler on Darlington’s egg-shaped oval. Harvick, who finished ninth Saturday, leads the NASCAR Cup Series championship standings by a single point over Joey Logano, who has won twice in the four races to date.

Hamlin was, as expected, extremely eager to get racing again. No fans will be allowed at Darlington and social distancing standards will apply to teams, drivers and crews. But Hamlin is optimistic that the racing at one of NASCAR’s most historic venues will be as good and compelling as ever.

“I think, all in all, it’s going to be like an old shoe,” Hamlin said. “I don’t think from the TV’s perspective, fans will see anything different than just a normal race that they would normally see at Darlington.”