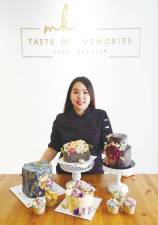 We listen to K-Pop songs, cry over heart-wrenching Korean dramas and delight in Korean food such as spicy and sour kimchi or spicy fried chicken, and now Korean piping trends are set to sweep the cake design world.

The latest baking trend is Korean buttercream flower cakes, which are made using a new glossy, shiny cream, and created with a different technique compared to the more standard Swiss, Italian or French buttercream cakes.

Special piping flower nozzles or tips are used to create realistic and beautiful flower petals, such as roses, peonies or vintage English flowers, that are almost too pretty to sink your teeth into.

The trend is a growing hit among locals as well. Koh Mei Kuan, a cake designer who runs her own company named Taste of Memories, studied piping techniques in South Korea, and now conducts cake piping workshops.

“As the Korean wave is in trend now, more people are getting to know about Korean-style cakes. The intricate design has different shades or tones of pastel. The difficult part is piping the different shades in one flower,” said 24-year-old Koh.

“Each cake I create has its own distinctive flavour profile and colour scheme,” said Koh, who uses a mixture of Korean bean paste, glossy buttercream and chocolate to create the delicate, soft pastel coloured blooms.

It was Koh’s desire to create niche cakes for customers which led her to run her own Korean Bean Paste Flower Piping Class.

“I fell in love with the craft,” confessed Koh, who then posted her beautiful creations on social media. It soon attracted the attention of other cake lovers, who began requesting for one-on-one coaching or group classes.

“At first, I treated it as just a side interest but when the number of students grew, around the same time Korean flower piping started to become a trend, I decided to master the craft in South Korea, where the trend originated,” she said.

“I started to innovate new designs, developed new skills and used my existing knowledge to refine and create one-of-a-kind artistic cake design methods, because Malaysians’ preferences are very much different from South Koreans.”

Koh’s bestseller is Ichigo, or strawberry shortcake, made specially to suit Malaysian taste palettes, while her personal favourite is her Korean winter rice cake, a healthy cake made from natural ingredients.

Rice cakes are a part of Korean culture, and are almost exclusively made for birthdays, ancestral offerings and other major celebrations.

“I am passionate about creating edible art, which is pleasing to the eyes,” revealed Koh. “Whenever I create something really beautiful with my hands, I feel like I am an artist. I wanted to share that knowledge and skill.

“I believed in myself and in my passion, hence, I started Taste of Memories in 2016.

“My vision is to nurture people who have a passion to carve their own future with the skills they have in their hands,” said Koh, who left her original plans to study accounting to pursue pastry art, and graduated with a diploma in pastry.

“I want to become a role model for the younger generation to equip themselves with skills, and be responsible for their own lives with the knowledge that they have gained to create their own unique paths towards the future.”