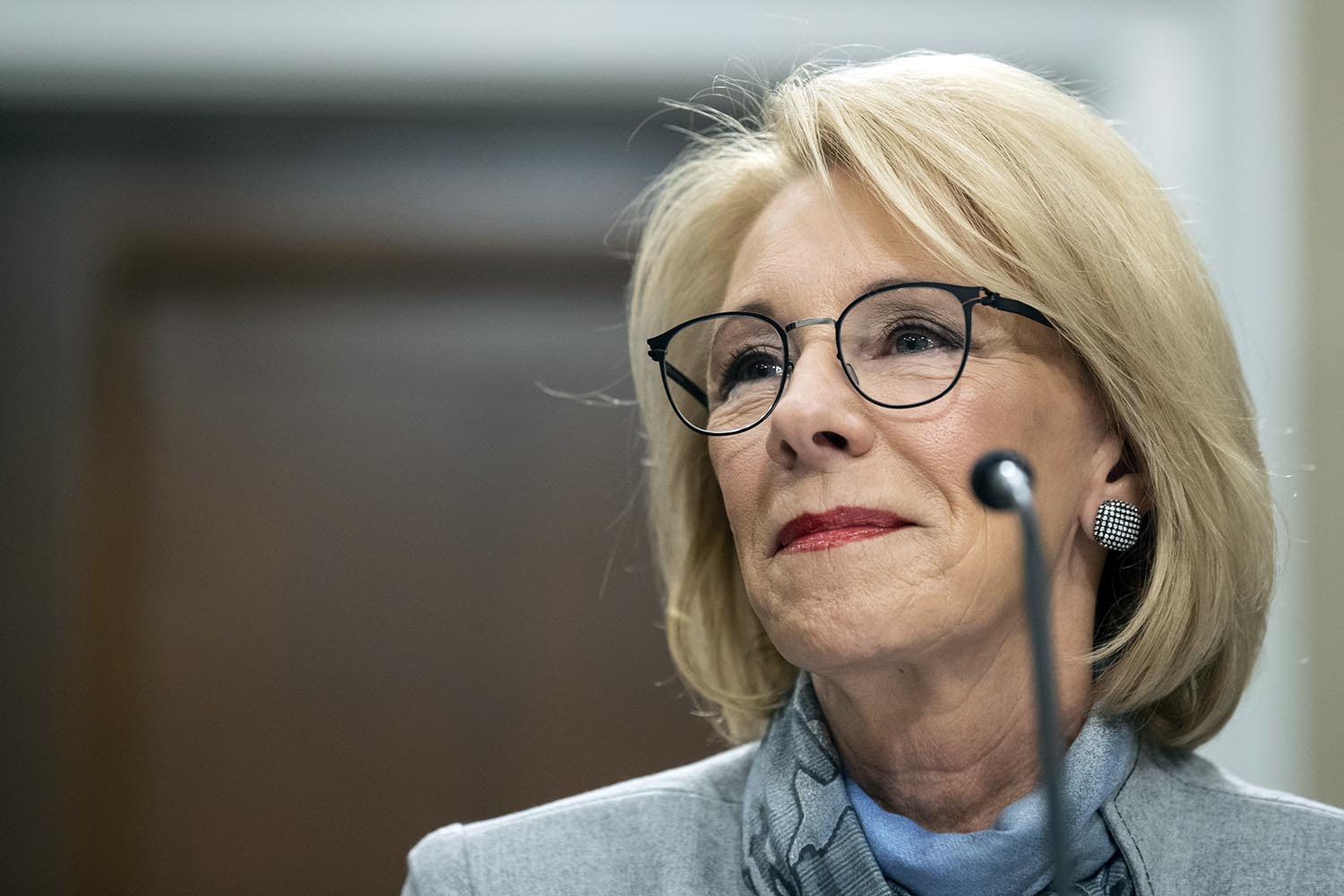 DeVos, who has been criticized for standing on the sidelines during the crisis, took a tough tone. During a call with governors, DeVos slammed the Fairfax, Va., district for its distance learning “disaster” in the spring and offering a choice of only zero or two days of in-person instruction moving forward, according to notes of a call, led by Vice President Mike Pence, with governors obtained by POLITICO. Earlier in the pandemic, DeVos had been more open to kids learning both online and during in-person classes.

“Education leaders need to examine real data and weigh risk…risk is involved in everything we do, from learning to ride a bike to riding a rocket into space and everything in between,” she said.

But a statement Tuesday night from teachers unions, the PTA, special education administrators and secondary school principals indicated that instead their relationship with the White House has hit a new low.

“Throughout this pandemic, the administration has failed to address the needs of students, especially those students who need the most support. They have failed to listen to families and public school educators who have been on the frontlines serving their communities,” it said.

“Public school educators, students and parents must have a voice in critical conversations and decisions on reopening schools. The president should not be brazenly making these decisions.”

Trump and DeVos both credited Florida’s new reopening plan, which orders all of the state’s public schools to reopen in August for at least five days per week for all students. “We will put out the fires as they come up but we have to open our schools,” Trump said, and he decried “political statements” that will keep schools closed.

Trump had tweeted on Monday: “Corrupt Joe Biden and the Democrats don’t want to open schools in the Fall for political reasons, not for health reasons! They think it will help them in November. Wrong, the people get it!”

The push to reopen comes as parents agonize over whether it will be safe to send their kids back to school this fall and districts wrestle with whether and how to conduct classes. The reopening of schools is vital not just to getting the economy going, but to Trump’s reelection prospects. The campaign may be banking on the issue as a way to revive his appeal among disaffected suburban women, whose support will be key.

The Trump campaign is also seizing on Biden’s support of teachers unions that are stalwarts of Democratic politics and challenging whether Biden is committed to helping parents get their kids back to school. The campaign’s “question of the day” on Tuesday for Biden, the presumptive Democratic nominee, is “Will you side with union bosses who want to keep schools closed or parents who want their kids to keep learning?”

HHS Secretary Alex Azar separately backed up DeVos, saying parents should expect schools to deliver a safe learning environment for their children, even during a pandemic.

“We must reopen,” he said during a White House event on reopening schools. “We’ve got to get people back to work, back to school, back to health care, because we can’t stay locked in our homes forever. It’s bad for our physical and mental and emotional health — us as adults, as well as for our kids.”

But Lily Eskelsen García, National Education Association president, said that “the reality is no one should listen to Donald Trump or Betsy DeVos when it comes to what is best for students.”

After Trump tweeted, “SCHOOLS MUST OPEN IN THE FALL!!!,” García fired back on Monday, “You forgot to add the word ‘SAFELY.’” Biden, speaking to the NEA on Friday, pledged his administration will have a “teacher-oriented” Department of Education.

Meanwhile, American Federation of Teachers President Randi Weingarten tweeted on Tuesday that, to minimize the risk of spreading Covid-19, schools need “double the staff and double the space to teach in person. “But with state budgets facing massive cuts as a result of the pandemic, we need federal funding to #ReopenSafely,” she wrote.

The White House hosted events throughout Tuesday on safely reopening, culminating with the roundtable discussion with Trump, first lady Melania Trump, administration officials and teachers, administrators and students from around the country. House Minority Leader Kevin McCarthy, a California Republican, wrote an op-ed for USA Today advocating liability protections for schools in any upcoming emergency relief package and underlining GOP support for helping parents with their child care problems.

Last spring, DeVos, in a slight departure from Trump, suggested through a spokesperson that schools may have to stick with virtual learning if they’re not ready to fully reopen. But on Tuesday, during the panel discussion at the White House, she praised Florida Education Commissioner Richard Corcoran for issuing a “very comprehensive” reopening plan in August for at least five days per week for all students.

“There may be other states and other communities that want to look at that, but again, with the expectation that students are together and that families will be able to count on a five-day school week if that’s the right answer for them,” she said.

During the later panel discussion with Trump, DeVos said too many students “were trapped in schools that don’t meet their needs” even before the virus, and that this is the time to reopen and rethink education — a common refrain for the school choice advocate.

“This moment demands actions,” she said. “Not excuse-making or fear-mongering.”

The White House is leaning on CDC reopening guidance and a report from the American Academy of Pediatrics that details the importance of in-person learning and “strongly advocates that all policy considerations for the coming school year should start with a goal of having students physically present in school.”

CDC Director Robert Redfield said during another White House panel discussion that reopening plans should minimize the risk of Covid-19 while providing students the critical services, academic resources and social and emotional support they need. And plans should anticipate that Covid cases “will in fact occur.”

“The CDC encourages all schools, all schools to do what they need to reopen,” he said, adding that guidance the agency has issued should be viewed as guidance to reopen. “Nothing would cause me greater sadness than to see any school district or school use our guidance as a reason not to reopen.”