Did You Know There Are College Junior Varsity Basketball Teams? North Carolina Has One 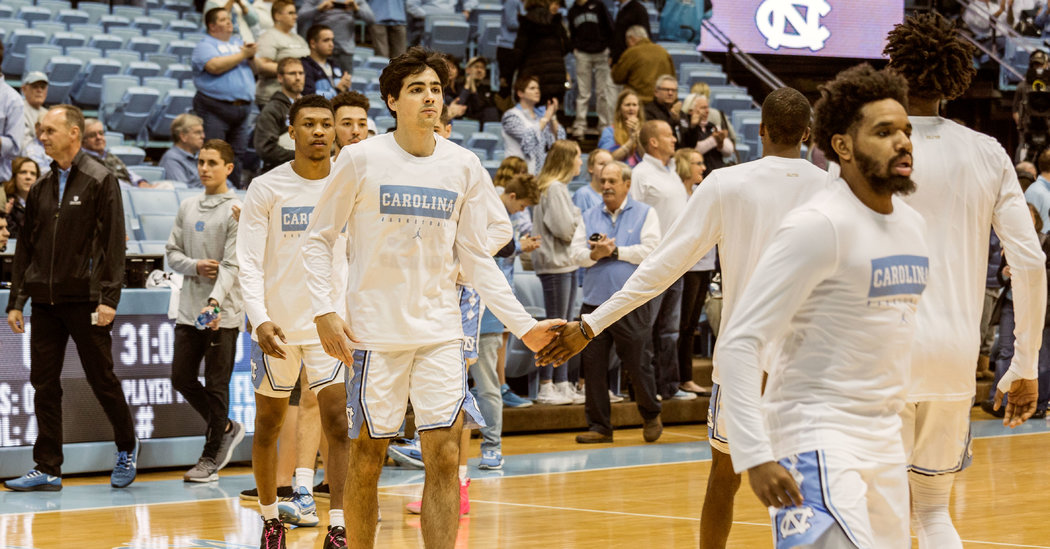 Robbie O’Han was supposed to spend his last year of organized basketball playing mostly against prep schools and junior colleges.

Instead he got called up to one of the most storied teams in college hoops, the North Carolina Tar Heels, after spending three seasons with its junior varsity team, whose very existence is unknown to a majority of fans.

The Tar Heels are one of only a few universities to maintain a J.V. team, a hierarchy far more common in American high schools than in Division I, where the best programs mostly run single teams made up of scholarship recruits, top players with N.B.A. aspirations and a few walk-ons.

In September, O’Han got an irresistible offer to move up the chain from Hubert Davis, an assistant coach with the Tar Heels. The main team was down to one healthy point guard, Cole Anthony, and needed another before the season started in November.

“I was going to have three weeks to practice with the team and then they were going to decide if they wanted me to stay on the team or go back down to J.V.,” O’Han said. “And they decided to keep me.”

Since being called up, O’Han, who is 6 feet 3 inches tall and 21 years old, has played in eight games, albeit in a down season for one of the blue bloods of college basketball. In eight games, he has a total stat line of one rebound, one steal, one turnover, and one foul, with eight minutes played.

When he entered a 94-71 victory over Miami on Jan. 25, O’Han was greeted with a raucous round of applause from the home crowd and a mention from the ESPN announcers on the television broadcast.

“I was just focused on going in and I was so excited that we were winning by 30,” O’Han said. “We really needed the win, so I didn’t really notice what the fans were doing, but afterward people were telling me that the fans were going crazy, so that was definitely cool to hear.”

Though rare in college basketball, the junior varsity team has been something of a pipeline for North Carolina. O’Han is one of two former junior varsity players on the current roster, along with Caleb Ellis, a graduate student who played in 19 games last season for the school’s primary team.

The N.C.A.A. does not keep track of junior varsity teams nationally, and North Carolina is the only school in the Atlantic Coast Conference with one. Only a handful of Division I universities have a J.V. team.

When the rules changed, most other universities across the nation disbanded their freshman teams. Kansas once had one that was coached for eight seasons by North Carolina’s current coach, Roy Williams. The team has since disbanded, but it was also led previously by Kentucky Coach John Calipari and Maryland Coach Mark Turgeon.

“More teams used to have J.V.s,” said Tom Konchalski, a longtime New York City basketball historian and recruiting expert. “But there really aren’t that many that have it any longer.”

O’Han said most of the J.V. players stopped playing after two years. He said that Davis, the J.V. coach the previous three seasons, “made exceptions for guys that he believed had a chance at making varsity.”

“When I was in high school, I was getting looked at by mainly DII and DIII schools,” O’Han said. “I grew up in Raleigh, so I knew about the J.V. program at U.N.C. and I knew some guys who had gone through it. From what I heard, it was a tryout and any college student could go and try out. So I chose to go to U.N.C. instead of playing basketball elsewhere just as a general college student.”

The junior varsity team plays nearly all of its games in the Dean Smith Center, attracting maybe a few hundred fans about three hours before the varsity team packs the nearly 22,000-seat arena.

“You got great seats, everybody’s at center floor,” said O’Han’s father, Rob O’Han Sr. “You can hear everything.”

The team plays a mix of teams from community colleges and other junior varsity programs, and prep schools filled with players who are just out of high school and looking to focus their development in the sport.

“We play the prep schools and we try to keep it close but we usually get beat,” O’Han said after watching a recent game that was part of a three-game losing streak to prep schools. “But those are always the most fun games because we get to compete at a higher level.”

Lee Martin, the coach at Hargrave Military Academy in Chatham, Va., said his team plays the North Carolina junior varsity squad every season (their game is scheduled for Feb. 25). “It’s one of my favorites games of the year,” Martin said. “It gives our guys an invaluable experience.”

Martin said that experience included not only playing in the Dean Smith Center, but also getting to use its visiting locker rooms. The North Carolina junior varsity players use a separate, smaller locker room from its varsity team. (“It’s in a different section, it’s not as nice,” O’Han said.)

For Frederick, coaching the junior varsity players helps prepare him for a bigger head coaching job. He said one of the toughest challenges comes on game days when he has to coach in one game, and then quickly transition to assisting in another.

“One of the hardest parts about it is trying to let go of the J.V. game immediately,” Frederick said. “So I had the Miami scout for instance, and now the J.V. game is over and you’ve got to forget about what about happened in the J.V. game and focus on turning your attention to getting ready for Miami or whoever you’re playing.”

O’Han was essentially brought up to be an extra body during practice for a varsity team that has been hit hard by injuries this season.

“They were low on numbers,” said O’Han, who generally practices on the scout team against the players who are part of the regular rotation.

He spent the early part of the season guarding Anthony, the freshman point guard who was a McDonald’s all-American and is a projected top-10 pick in the upcoming N.B.A. draft.

“I was guarding Cole every day, which was definitely a challenge,” he said. “That was another really cool part about being on the team.”

Anthony had knee surgery in December and missed 11 games, one of many players who has missed time for North Carolina.

Those injuries, one of several factors that make it highly likely for North Carolina to miss the N.C.A.A. tournament this year for the first time since 2010, give O’Han more opportunities to play.

O’Han will most likely be finished with basketball after this season. He is majoring in business and after interning last summer at SunTrust Bank, plans to work as an investment banker after graduation.