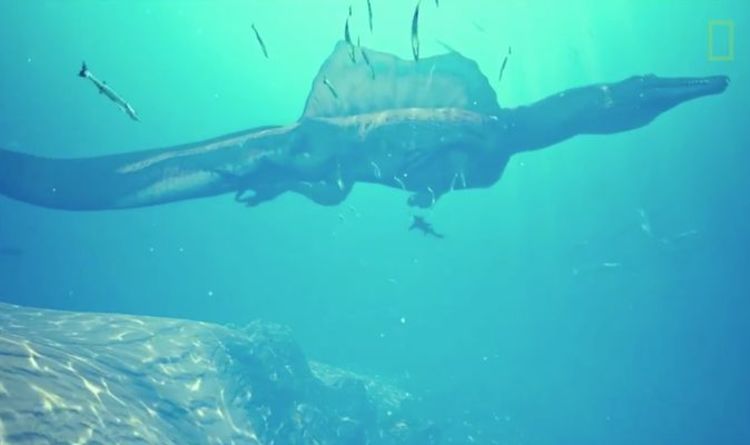 The research, documented in the journal Nature, was carried out in Morocco and it provides insight on how 50-foot-long Spinosaurus aegyptiacus lived. National Geographic science writer, Michael Greshko, described the evolving tail of the seven-ton animal that was even longer than an adult Tyrannosaurus rex.

Mr Greshko wrote: “The red-brown remains laid before me are altering that picture. These bones assemble into a mostly complete tail, the first yet found for Spinosaurus.

“It’s so large, five tables are required to support its full length, and to my shock, the appendage resembles a giant bony paddle.

“Delicate struts nearly two feet long jut from many of the vertebrae that make up the tail, giving it the profile of an oar.

“By the end of the tail, the bony bumps that help adjacent vertebrae interlock practically disappear, letting the tail’s tip undulate back and forth in a way that would propel the animal through water.

“The adaptation probably helped it move through the vast river ecosystem it called home—or even dart after the huge fish it likely preyed upon.”

In 2014, researchers led by Mr Ibrahim claimed that the dinosaur was the first confirmed semiaquatic dinosaur.

The theory received rejection from peers who questioned whether the remains Ibrahim’s team were analysing were actually Spinosaurus, or even a single animal.

The Spinosaurus lived 95 to 100 million years ago in the Cretaceous period.

READ MORE: How to clean and disinfect your kitchen properly

Samir Zouhri, a team member and paleontologist at the Université Hassan II, said: “This tail is unambiguous. This dinosaur was swimming.”

Other experts who have reviewed the study coincided that the tail confirms doubts and reinforces the theory of a semiaquatic Spinosaurus.

“This is certainly a bit of a surprise,” said University of Maryland paleontologist Tom Holtz, who did not take part in the research efforts.

“Spinosaurus is even weirder than we thought it was.”

Mr Greshko describes the story of Spinosaurus as “nearly as unusual as the newfound tail, an adventure that winds from bombed-out German museums to the Martian-like sandstone of the Moroccan Sahara”.