The Division 2 fans can download Title update 9 on PS4, Xbox One and PC.

The new Division 2 update goes live during server downtime, which begins at 8.30am UK time on April 21.

The Division 2 servers are expected to come back online roughly 3-hours later at 11.30am.

As with all Division 2 updates, the patch notes are pretty lengthy. New features include the ability to upgrade Exotic items to level 40 and re-roll their attributes.

Speaking of Exotics, lots of them have been given balance changes and buffs to improve their capabilities.

You can see the full TU9 patch notes for PS4, Xbox One and PC below.

• You will now be able to upgrade Exotic items to level 40, as well as re-roll their attributes with the new Reconfiguration system available in the Crafting bench. Find out more in our dedicated article here.

– Cannot be staggered by explosions.

– Increase total weapon damage by 3% each second you are not moving. Stacks up to 10x and stacks are lost when moving

– This exotic only provides defensive attributes and no brand bonus, so now has potential for high damage and makes it appealing to both red and blue builds.

– Developer comment: The old version didn’t provide enough engaging gameplay; this change should help with that.

– Developer comment: This buff is to better compensate for the lack of brand bonus.

– Developer comment: This buff is to better compensate for the lack of brand bonus.

– Base damage is now the same as the non-exotic LMG version.

– All exotics will now roll at the highest possible minimum roll regardless of the difficulty they are obtained in.

– Exotic items can still roll higher than the minimum but minimum rolls are now higher.

– The last enemy you have damaged with a skill is marked.

– Dealing weapon damage to that enemy consumes the mark to reduce active cooldowns by 6s.

– Does not consume mark if no skill is on cooldown.

• Killing an enemy adds 1 round of a random special ammo into your sidearm.

• Enemies that walk within 3m of your hive, turret, or remote pulse are shocked. 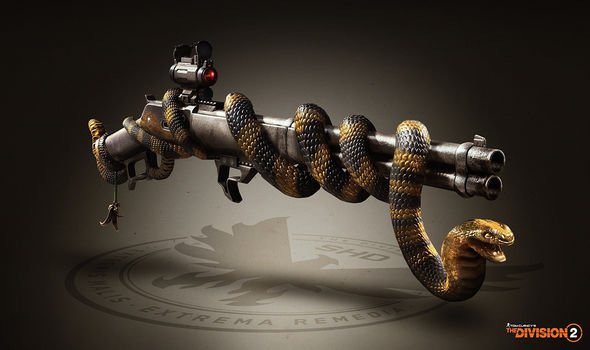 – Developer comment: Currently it is difficult to keep a high uptime in 4-man content as non-tank players try to be as safe as possible and NPCs have higher lethality, so chip damage is less frequent.

• When you apply a status effect, it is also applied to all enemies within 8m (up from 5m) of your target.

– Now correctly rolls an attribute in addition to pistol damage and melee damage.

– Increased maximum roll of Damage to Health to 21%.

– Players on Stadia will not see this be displayed correctly and instead see an increase to Damage to Health on other weapon types. This is an UI issue only and will be fixed with the next client update.

– White buff armor repair lowered to 2%/3% once every second.

– Lowered difficulty to be more on par with other missions.

– Lowered difficulty to be more on par with other missions.

– Reduced health and damage of the APC.

– NPC composition has been adjusted.

• Reduced sprint speed of Tank archetype from all hostile factions

• Reduced damage of all NPC shotguns

• Any NPC with special ammo has the same UI indication as from the Special Ammo Directive.

• Examples of who this affects:

• Outcasts who pick up special ammo from boxes deployed by their Support archetype.

• Bounties who spawn with special ammo.

• To prevent this from being too large of a nerf in 3-4-player co-op a Rogue Agent can spawn with an armor kit which can repair their armor up to 70%.

Previously, certain bosses and bounties would magically overheal themselves and their fireteam. This “buff allies” ability lacked clear messaging, so it has been replaced with a “leader overheal” ability. This is the same ability that the Rikers’ Leader archetype has. Once the boss (leader) is killed, all their friendlies lose their overheal. The UI indicator of pulsating circles inward/outward in their nameplate signals when this ability is active.

• Increased power of dropped Exotics to always be of the highest tier, giving the highest minimum rolls.

• Lowered number of Exotic Components awarded from Exotic deconstruction to match the cost of Exotic reconfiguring.

• Combined all Skill Mod blueprints of different qualities into a single blueprint per Skill, scaling quality with that of the Crafting Bench.

• Added Skill Mod Blueprints for the Skills introduced in Warlords of New York.

• Added Blueprints from the general Blueprints pool to the rewards of Daily Projects.

• The Sharpshooter’s Tactician Skill base radius has been increased to 50m.

• Scoping is now enabled when using a Shield Skill.