DNC goes full informercial: Superlatives from Night 1 of the convention 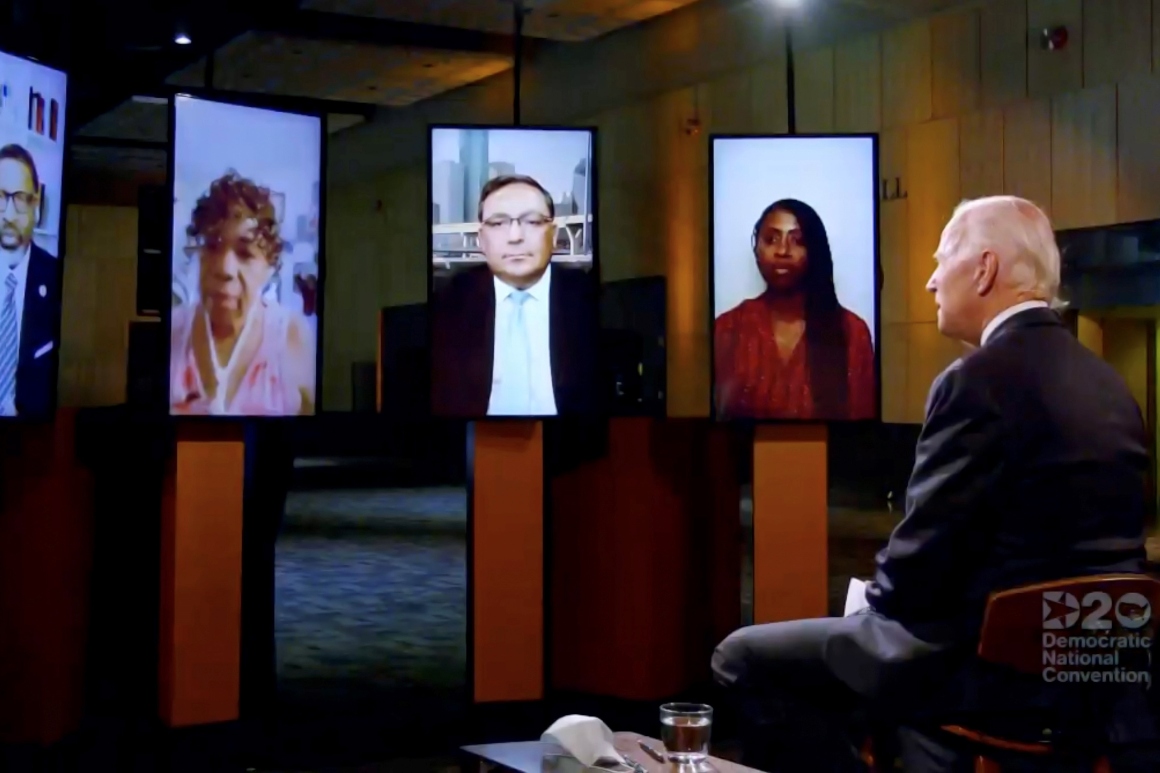 Former Vice President Joe Biden made an appearance — a short, pre-recorded conversation on race relations and police misconduct. It’s unusual to see the nominee-in-waiting on the first night, but this wasn’t really a convention it at all. It was a TV show, and some elements worked better than others: Virtual fans might work as a kitschy gimmick at the pro basketball games played inside the NBA “bubble,” but the Zoom applause for musical performances and speeches felt forced.

Here are POLITICO’s superlatives for Night One of the Democratic convention: the highs, lows and everything in between.

Four years ago, then-First Lady Michelle Obama delivered one of the more memorable speeches at the Democratic convention in Philadelphia, where she recounted how she talks to her daughters about what she saw as a corrosive brand of politics that confronted her husband, the first Black president.

But after Trump’s election — and the suggestion from some Democrats that the high road was a bridge to defeat — Obama offered a corollary to that motto.

“Over the past four years, a lot of people have asked me, ‘When others are going so low, does going high still really work?’” Obama said in her recorded remarks. “My answer: Going high is the only thing that works. Because when we go low — when we use those same tactics of degrading and dehumanizing others — we just become part of the ugly noise that’s drowning out everything else. We degrade ourselves. We degrade the very causes for which we fight.

“But let’s be clear: going high does not mean putting on a smile and saying nice things when confronted by viciousness and cruelty,” she added.

The second half of the night featured a 10-minute segment of Biden’s former primary rivals gushing about his character before Bernie Sanders came on as the closer, delivering both a trademark indictment of Trump and a validation of Biden’s progressive credentials to his still-loyal supporters in the primary.

Sanders touted Biden’s stances: raising the minimum wage to $ 15 an hour, paid family leave and criminal-justice reform. He even defended Biden’s position on expanding access to health care, the defining contrast of the presidential primaries.

“While Joe and I disagree on the best path to get to universal coverage, he has a plan that will greatly expand health care and cut the cost of prescription drugs,” Sanders said. “Further, he will lower the eligibility age of Medicare from 65 to 60.”

Sanders saved his strongest words for Trump, hitting the president for his “authoritarianism” and handling of the coronavirus.

“Nero fiddled while Rome burned,” Sanders said. “Trump golfs. His actions fanned this pandemic resulting in over 170,000 deaths and a nation still unprepared to protect its people.”

Just in case the subtext wasn’t clear about how John Kasich — the budget-slashing former congressman, Fox News personality and two-term GOP governor of Ohio — came to speak at a Democratic convention, there Kasich stood at the literal junction of two dirt roads.

“Sometimes elections represent a real choice, a choice we make as individuals and as a nation about which path we want to take when we have come to challenging times,” Kasich said. “America is at that crossroads today.”

Notably, Kasich, who spoke less than a half-hour before Sanders, sought to reassure right-leaning voters like him about how Biden will govern if elected.

“I’m sure there are Republicans and independents who couldn’t imagine crossing over to support a Democrat. They fear Joe may turn sharp left and leave them behind,” Kasich said. “I don’t believe that.”

Sen. Amy Klobuchar (D-Minn.) was the overwhelming favorite to win this category, and she delivered.

“You know, the president may hate the post office,” Klobuchar said from outside the Minnesota state capitol building in St. Paul. “But he’s still going to have to send them a change-of-address card come January.”

Klobuchar, who deployed a number of groan-worthy one-liners on the stump during her presidential campaign, was an early favorite for the running-mate slot but withdrew from consideration as pressure mounted for Biden to pick a Black woman.

Control of the Senate in 2021 could very well come down to Maine, where longtime GOP Sen. Susan Collins is seeking to overcome her state’s Democratic lean and win a fifth term.

Democrats provided her opponent, Sara Gideon, with an enviable platform: a taped introduction of singer-songwriter Maggie Rogers, set against the backdrop of an idyllic, rocky Maine beach.

Gideon is already a cause célèbre for party activists and donors, raising more than $ 24 million for her race against Collins.

Sen. Doug Jones (D-Ala.), the most vulnerable incumbent up in 2020 from either party, gave a more straightforward speech. Jones, a longtime Biden loyalist, could be a candidate for a Cabinet appointment if he is ousted by Republican Tommy Tuberville in November.