‘Do I look like a radical socialist?’: Breaking down Biden’s speech 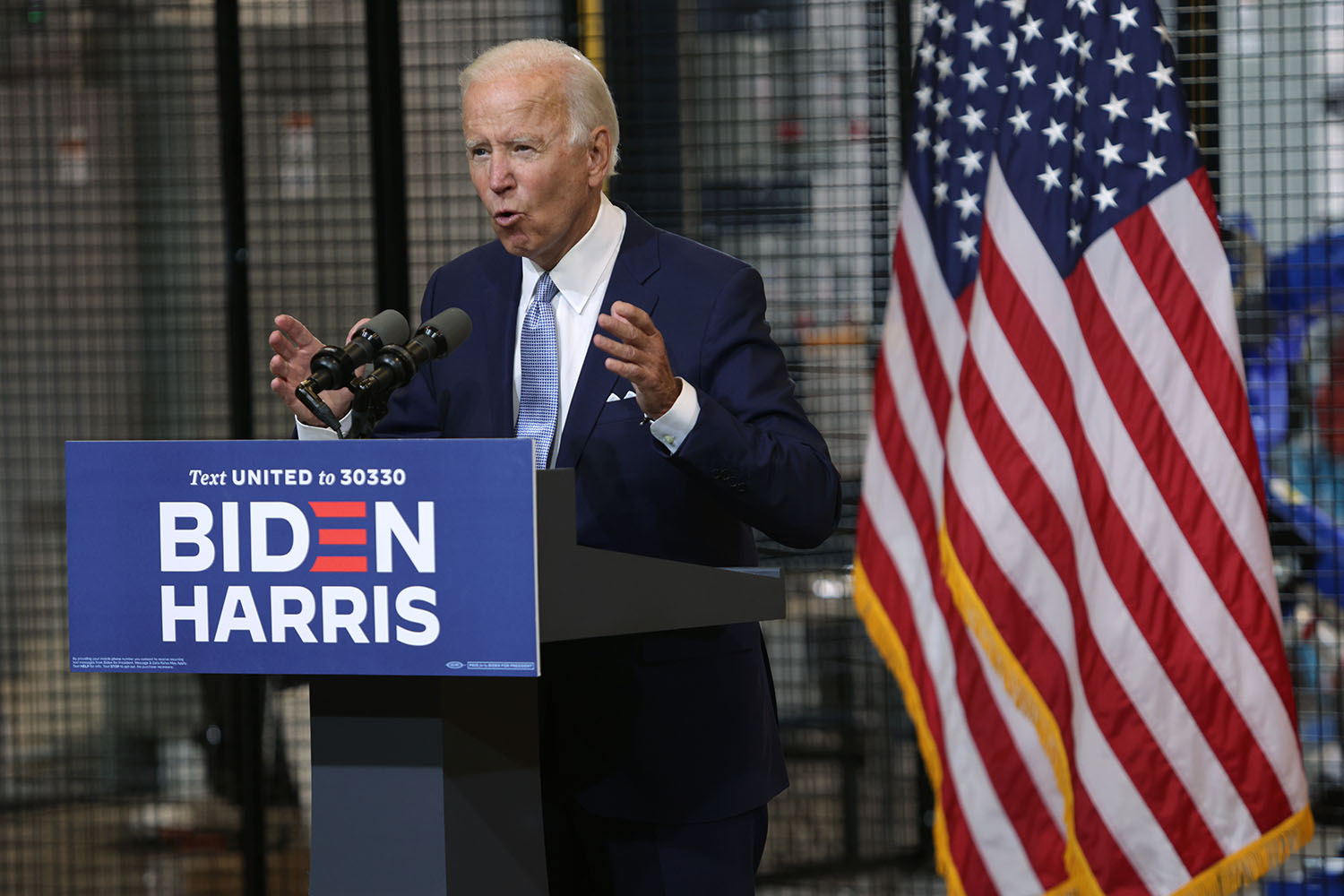 Joe Biden opened his speech with a reference to FDR about truth-telling and leveling with the American people. Presidents have long relied on similar promises, including Jimmy Carter, who famously pledged, “I will never lie to you.” While FDR’s remarks set the tone for how a president should operate, it also helped Biden make the contrast with Donald Trump, whom he quotes later in the speech to truth-squad the president and respond point-by-point to many of the charges and themes Trump made in his GOP convention address.

For months, Biden has denounced violent reaction to police killings. He’s done it in speeches, cable news interviews, written statements and campaign videos. But with each new shooting, Trump and his campaign have called on Biden to do so again, and Trump has had some success in setting the parameters of the national debate.

After all, reporters and pundits aren’t asking to nearly the same degree when Trump will condemn the violence by his supporters or people sympathetic to his message. It’s also worth critically examining Trump’s claims that the left-wing rioters are Biden supporters rather than anarchists who are upset with both parties.

While Biden reiterated that looting and arson aren’t protesting, the most impactful line from his speech on the topic was his unequivocal call for people committing those acts to face criminal prosecution. Biden laid down a marker for Democratic district attorneys, attorneys general, mayors and governors who might fear reprisal from their own party for seeking justice against lawbreakers. And Biden offered a rebuttal to efforts by his opponents to paint him as somehow giving cover to Democratic officials who are seen as giving cover to agitators.

“He may believe mouthing the words law and order makes him strong, but his failure to call on his own supporters to stop acting as an armed militia in this country shows you how weak he is.”

Biden would rather be talking about Trump’s failure to quell the pandemic and the economic turmoil resulting from his sluggish response. The former vice president did use the speech to make those points, drawing a line between the racial turmoil and Trump’s chaotic stewardship of the country (whether he believes he’s president of everybody, or not, is how Biden puts it). After asking Americans whether they feel safer with Trump in office, Biden pushed his offensive even further by evoking the armed militants of strongmen who helped their authoritarian leaders undermine democracies and remain in power.

“The moms and dads in Scranton where I grew up — who have worked and scrapped for everything they’ve ever gotten in life.”

Speaking in Pennsylvania, this is a not-so-subtle rejoinder to Trump’s repeated attempts to portray Biden as someone who “deserted” his home state. Biden left Scranton at age 10, after his father, Joe Sr., struggled to find steady work and was traveling between his home and Wilmington, Del., to clean boilers.

This is a point Biden has been making back to the primary: Trump is in this purely for himself and his resulting decisions have led to the mess the country is in.

“You know me. You know my heart, and you know my story, my family’s story. Ask yourself: Do I look to you like a radical socialist with a soft spot for rioters? Really?”

Politicians often refrain from repeating their opponents’ critiques, but this is as close as you’re going to get to Biden addressing Trump’s central charge: That he’s a Trojan horse for far-left Democrats who can’t stomach condemning like-minded rioters. Biden, 77, white, and the picture of a career Washington politician, doesn’t look the part. And his use of the word “really,” his eyes widening and brow furrowing in disbelief, is probably the best encapsulation of this entire speech.

At times, Biden has talked about Trump’s term with sadness. He didn’t even utter the word “Trump” in his Democratic National Committee convention speech (Trump named Biden 41 times). That helped preserve interest in Biden’s speech on Monday. Biden wouldn’t be offering such a forceful condemnation of the violence if he felt like he didn’t have to. But the danger for Trump, as he heads to Kenosha, Wis., on Tuesday, is placing himself close to the violence and reminding Americans that he’s the one in charge — and the one who promised four years ago that this kind of unrest would come to an end under him.

It also highlights Trump’s attempts to separate himself from Democrats and Democratic-run cities while Biden offers himself as a president for everyone. In short, Biden is asking people to imagine how things could possibly get worse, and arguing that they will under Trump.

“Frankly, I believe if I were president today, the country would be safer and we would be seeing less violence.”

Biden points to his efforts here to reform police departments, but his solutions are a reminder that many Democrats don’t believe those will be sufficient. His position on qualified immunity — a fix, rather than abolishing officer protections outright — is still seen as nibbling around the edges.

“I have worked with the police in this country for over forty years. I know most cops are good and decent people. I know the risk they take every day with their lives. And I am confident I can bring the police to the table.”

Biden isn’t just being accused — incorrectly — of wanting to defund the police. A police union representative at the GOP convention called him the most anti-law enforcement nominee ever. And a pro-Trump super PAC is running an ad that depicts him as no friend of police. Biden, who has pushed for more funding for police departments and for decades bragged about how his crime bill put thousands more cops on the beat, makes it a point to basically argue that the police officers who are killing unarmed Black people are a small minority.

“The murder rate is up 26 percent in cities across the nation this year under Donald Trump.”

Let’s unpack where Biden is going. Trump’s argument on this one is, again, that murder is up because of increased violence in Democratic-run cities. But it’s also up in two cities in the swing state of Florida (which has a Republican governor), Miami and Jacksonville, which are led by GOP mayors.

“Do you really feel safer under Donald Trump?”

Trump was prepared to run on a booming economy. But that hasn’t been possible since January, when things took a sharp downward turn. The “safer” aspect of this question Biden poses amounts to his version of Reagan’s debate question against Carter during the close of the 1980 presidential race. “Are you better off today than you were four years ago?”

Polls taken before the shooting of Jacob Blake in Kenosha showed Biden leading Trump on the general topics of crime and safety, including among seniors 65 and older. Covid fears among seniors intensified over the spring and into summer, and Biden’s focus on the virus and Social Security is a reminder of why more older Americans may back him than did Hillary Clinton.

The Democratic National Committee has spent weeks hammering this point. And before Biden spoke Monday, Democrats and campaign surrogates acknowledged that he needed to do a better job of making the connection for voters. One reason for this is some emerging signs of trouble. In parts of the country where the virus is abating and the economic collapse hasn’t, Trump is currently polling better than where he finished against Clinton in 2016. Pollsters and strategists believe that’s because — without reminders of the virus worsening the economy — some of these voters believe Trump would do a better job than Biden on the economy going forward. If there’s an area where Biden still has considerable work to do, it’s persuading voters that Trump is responsible for the current economic woes, and why the president isn’t the one to fix a problem he helped cause.

Biden is getting hit with accusations in Pennsylvania by Trump and his campaign of supporting a ban on fracking. Biden supports banning new fracking permits on federal land, but not a prohibition on fracking.

Trump beat Biden to the punch in traveling to Kenosha (he goes Tuesday). But it was Biden and VP nominee Kamala Harris who have spoken with Blake’s family. Using Blake’s mother to bolster his calls for peace — as he did in a video last week — helps Biden reinforce the fact that many older Black Americans come at the issue from a similar perspective.

Easily Biden’s most vivid reminder of when Trump suggested researching the possibility of treating the coronavirus by injecting disinfectant into the body.

“Donald Trump is determined to instill fear in America — that is what his entire campaign for presidency has come down to. Fear. But I believe Americans are stronger than that. I believe we will be guided by the words of Pope John Paul II. Words drawn from Scripture: ‘Be not afraid.’”

Closing the speech with the words of a former Pope, drawn from scripture, is no accident. Trump once said Biden “Hurt the Bible. Hurt God. He’s against God.” Other Trump allies have questioned his beliefs.