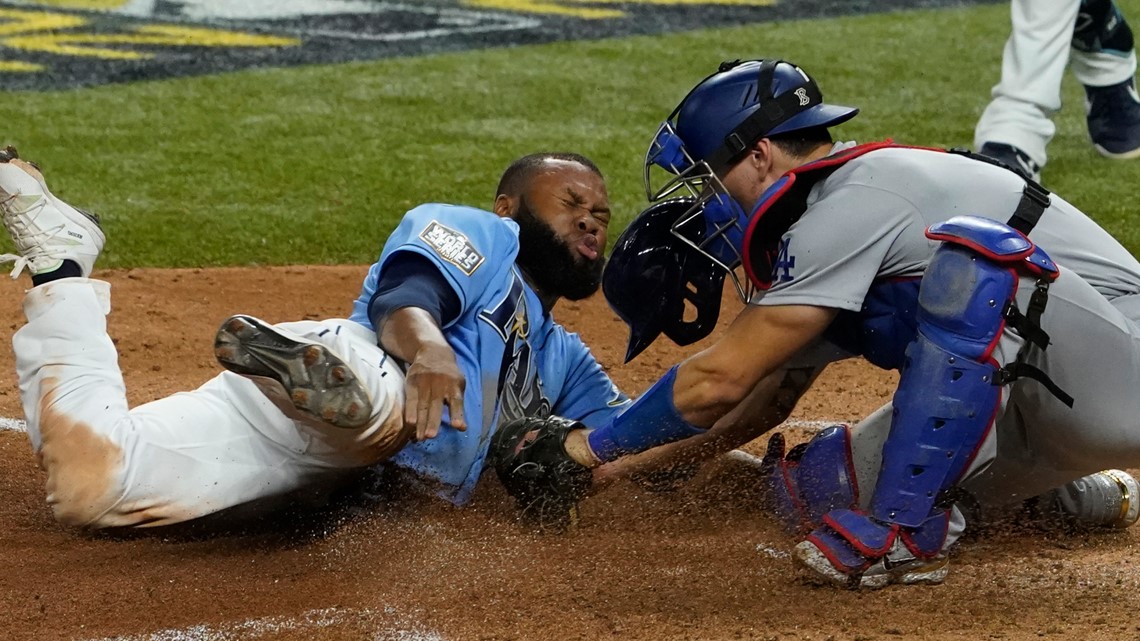 LOS ANGELES COUNTY, Calif. — The World Series resumes Tuesday when the Los Angeles Dodgers will get their first chance in 2020 to win their first championship since 1988.

Monday is an off day. Dodger manager Dave Roberts said he would “think through our guys and what they’re going to do us” and “relax in the bubble.”

Rookie right-hander Tony Gonsolin is scheduled to start Game 6 Tuesday for the Dodgers against Tampa Bay left-hander Blake Snell in a rematch of the starters in Game 2, won by the Rays, 6-4, Wednesday.

Gonsolin was charged with the loss in Game 2 , allowing a solo home run to the second batter he faced, Brandon Lowe, the only run and hit he allowed in 1 1/3 innings.

Snell allowed two runs and two hits in 4 2/3 innings, striking out nine and walking four. He was one out short of pitching the minimum five innings required for a victory. He was removed with Tampa Bay leading 5-2.

Game 7, if necessary, would be played Wednesday.

“I don’t think anyone’s thinking about Game 7,” Roberts said Sunday. “We’re going to enjoy tomorrow as an off day, get guys rested and focus on Game 6. Gonsolin is going to start and we expect to win and that’s all we’re thinking about.”

The entire Series is being played at Globe Life Field in Arlington, Texas, in an attempt to reduce the possibility of spreading the coronavirus.

Clayton Kershaw and three relievers held the Rays scoreless over the final 6 2/3 innings Sunday, Joc Pederson and Max Muncy homered and Corey Seager and Cody Bellinger singled in runs in the first for the Dodgers.

Kershaw allowed two runs and five hits over 5 2/3 innings, striking out six and walking two, improving to 2-0 in the 2020 World Series.

“He just grinded,” Roberts said. “He rose himself to that point. It wasn’t his best stuff but he found a way to get outs.”

The six strikeouts increased his postseason career total to a record 207, surpassing the previous record-holder Justin Verlander, who has 205.

Three Dodger relievers combined to limit the Rays to two hits over the final 3 1/3 innings. Blake Treinen was credited with his first save in his 15 career postseason appearances, retiring the final three batters he faced, striking out two, after allowing a single to the first batter he faced, Manuel Margot.

Tyler Glasnow, a 2011 graduate of William S. Hart High School in Santa Clarita, was charged with his second loss of the Series, allowing four runs and six hits, including both home runs, in five innings, striking out seven, walking three and throwing three wild pitches.

The Dodgers took a 2-0 lead in the first. Mookie Betts led off with a double and scored when Seager, the next batter, singled. Seager moved to third on two wild pitches by Glasnow and scored on Bellinger’s two-out single.

Seager’s run was the first of two two-out runs scored by the Dodgers Sunday, increasing their record total for the 2020 postseason to 59. The previous record was 46 by the 2004 World Series champion Boston Red Sox, whose roster included Dodger manger Dave Roberts.

Pederson led off the second with his second home run of the 2020 postseason and first of the 2020 World Series. Pederson has five career World Series home runs, tying Gil Hodges for second in Dodger history behind Hall of Famer Duke Snider’s 11.

Tampa Bay scored both its runs in the third. Kevin Kiermaier led off with an infield hit and scored one out later on Yandy Diaz’s triple. Randy Arozarena followed with a single, driving in Diaz.

The hit was Arozarena’s 27th of the postseason, a record for a single postseason. He had shared the record with Pablo Sandoval, who had 26 in 2014 for the San Francisco Giants.

Many individual and team postseason records have been broken in 2020 because of the additional round caused the expansion of the playoffs to eight teams in each league, three more than last season.

The Rays had runners on first and third with no outs in the fourth. Margot walked on a full count leading off the inning, stole second and moved to third on a missed catch error by Dodger second baseman Chris Taylor on the throw from catcher Austin Barnes.

Hunter Renfroe walked on a full count, but Kershaw induced Joey Wendle to pop out for the first out, then struck out Willy Adames.

Kershaw stepped off the mound and threw to Barnes who tagged out Margot attempting to steal home.

Because his pitching style prevents him from seeing runners on third, Kershaw tells his first basemen to yell at him “if they start going.”

Kershaw did not allow a base runner after the walk to Renfore, retiring the final seven batters he faced before being replaced by Dustin May with two outs in the sixth.

The Dodgers regained a two-run lead on Muncy’s home run with two outs in the fifth. Muncy became the ninth Dodger to homer in the 2020 World Series. The Dodgers are the first team in World Series history to have nine players homer in a single Series, according to the Elias Sports Bureau.

The previous record of eight was set by the 1989 Oakland Athletics in their four-game sweep of the San Francisco Giants.

Tampa Bay had only one runner in scoring position after the fourth inning. Kiermaier singled off May on the first pitch of the eighth inning and advanced to second two batters later on a wild pitch by Victor Gonzalez, who had relieved May with one out in the inning.

Gonzalez retired the final two batters of the inning after walking pinch hitter Mike Brosseau, the first batter he faced.

The victory fulfilled reliever Kenley Jansen’s promise made following Saturday’s 8-7 loss in which he was the losing pitcher, “We are going to come in and win the game tomorrow.”

Jansen did not pitch Sunday after pitching Friday and Saturday.

“Come Game 6 Kenley will be ready to pitch at high leverage,” Roberts said.

1988, away, Championship, Dodgers, first, from, series, since, victory, World