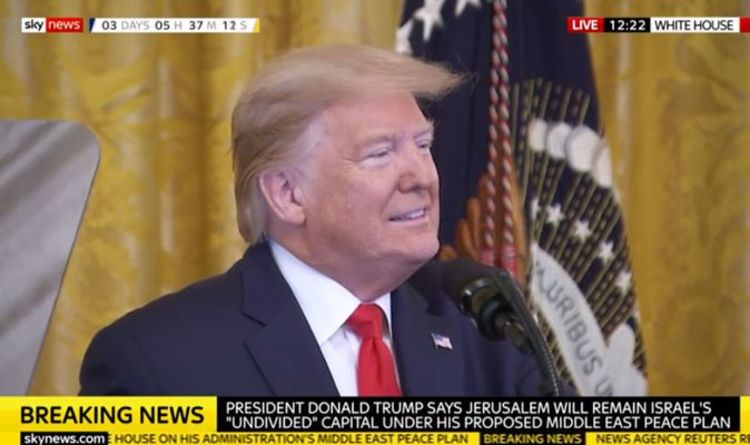 US President Trump on Tuesday proposed creation of a Palestinian state with a capital in East Jerusalem, dependent on Palestinians taking steps to become self-governing, in an attempt to achieve a peace breakthrough in their decades of conflict with Israel. Senior administration officials, briefing Reuters on the details of a plan the president was due to announce at the White House at mid-day, said that under Trump’s proposed Middle East peace plan the United States will recognise Israeli settlements on the occupied West Bank. In exchange, Israel would agree to accept a four-year freeze on new settlement activity while Palestinian statehood is negotiated, the officials said.

Israeli-Palestinian talks broke down in 2014, and it was far from clear that the Trump plan will resuscitate them.

US officials said they were braced for initial Palestinian skepticism but hoped that over time they will agree to negotiate.

The plan places high hurdles for the Palestinians to overcome to reach their long-sought goal of a state.

It remains to be seen also how Israel responds, given the pressures the right-wing Israeli prime minister, Benjamin Netanyahu, faces going into his third attempt at re-election in less than a year.

The plan encompasses about 80 pages.

It comes as President Trump announced yesterday he would unveil the proposed peace agreement Senior Adviser Jared Kushner drew up to put an end to the decades-long conflict between Israel and Palestine.

But the optimism was cut short after Palestinian Envoy to London Husam Zomlot blasted the plan as the “scam of the century”.

Discussing the proposal on the BBC’s Today programme, Mr Zomlot said: “Things are bluntly clear, this is neither a deal nor a plan and has definitely nothing to do with peace.

“This scam of the century is a fraud on every account.

“Fraud on the timing – today the Israeli Knesset is discussing the criminal charges and the immunity for Benjamin Netanyahu. Is it a coincidence? The impeachment process and hearing are also today, is it a coincidence?