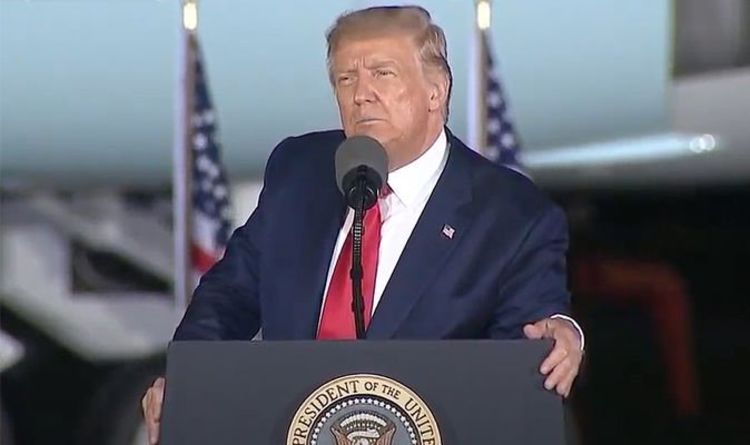 There are now less than two months until voters to go to the polls in the US. President Donald Trump has stood by his strategy ion holding mass rallies to try win over support despite the coronavirus crisis.

The incumbent’s campaigning style set the tone of the 2016 election, with thousands of supporters turning up to organised campaign events to hear the Republican speak.

The current pandemic has not stood in the way of the President holding his mass rallies, with fans gathering in outdoor venues at airport hangers to hear their candidate speak.

Dubbed as ‘peaceful protests’, the rallies have been used by Donald Trump to attack Joe Biden for failing to stand up to rioters demonstrating against racial inequality in the US.

The President has uses the campaign trail to accuse Joe Biden and this running mate, Kamala Harris, of supporting rioting and has warned of violence breaking out across the US should they be elected to the White House.

The Republican candidate has launched an attack on the Establishment status quo, claiming he could be more presidential than any President before him.

He says without his unconventional approach to leading the US there would be few crowds of supporters.

12.41am update: Trump says he’s on verge of tears after overwhelming support

Donald Trump has joked he could cry after his supporters broke out into a spontaneous chant of “we love you”.

Saying it “wouldn’t be good for his image” if he cried, the President said he was humbled to hear their support.

Taking aim at his rival’s mental state, the President has accused Joe Biden of not being pychologically fit for office.

The Republican claims his opposite number is only promoting policies he has been forced to adopt by left-wing elements of his party.

He says even Melania Trump felt sorry for “sleepy Joe” when watching him in the Democratic debates.

12.31am update: Trump vows to rebuild US economy after pandemic

To cheering fans, Donald Trump has claimed his is rebuidling the economy “bigger and better than ever before”.

He regularly touted the economy as one of his biggest successes in office, but since COVID-19 the marktets have plummeted.

Promising an end to the chaos caused by coronavirus  was near, he added: “Before the end of the year we will have a safe vaccine and we will defeat the China virus.”

12.25am update: China becomes the aim of Trump’s wrath

The President has attacked China, accusing the Asian superpower of crippling the US economy by failing to get a grip of coronavirus,

He says the US had “the greatest economy in the history of the world” before COVID-19 hit.

He says Beijing should have done more to prevent the virus from becoming a pandemic.

12.18am update: Trump opens the rally to thunderous applause

Donald Trump has opened his Michigan raly, declaring he is “thirllied” to be among so many supporters.

Starting by outlining how he has helped the state in the last four years, he says his administraion has helped open car plants across the region.

In contrast, he accuses his opponent, Joe Biden, of selling off jobs to China.

Donald Trump has landed in Michigan ahead of tonight’s rally.

Writing on Twitter the US President said: “Landing in the Great State of Michigan now. See you soon!”

23.25pm update: Michigan a vital state for both Trump and Biden

Michigan is a crunch state for Donald Trump and Joe Biden in November’s election.

Since then it has always turned blue. Winning back the state later this yer will be an important task for the Democratic candidate if he is to launch a serious challenge for the presidency.

23.11pm update: An hour to go until Trump speech

The President’s rally is due to start at 7pm EDT (12am BST), however he is often late to start addressing the onlooking crowd.

The Repuvlican 2020election candidate will likely begin to speak to his supporters in about an hour.

Ahead of the US election, Twitter has said it is expanding its misinformation rules.

Twitter Inc said on Thursday it would label or remove misinformation aiming to undermine confidence in the US election, including posts claiming victory before results have been certified or inciting unlawful conduct to prevent a peaceful transfer of power.

Twitter said in a blog post it was updating its rules to recognise the changes in how people will vote in the Nov. 3 election and try to protect against voter suppression and misleading content on its platform.

The widespread use of mail ballots in the U.S. election due to the coronavirus pandemic will likely cause significant delays in tallying results, which some experts fear could allow misinformation to gain traction.

Rich northern EU states like Germany and France could make unpopular orders to poorer southern states like Italy and Spain, according to Brexit author...
Read more