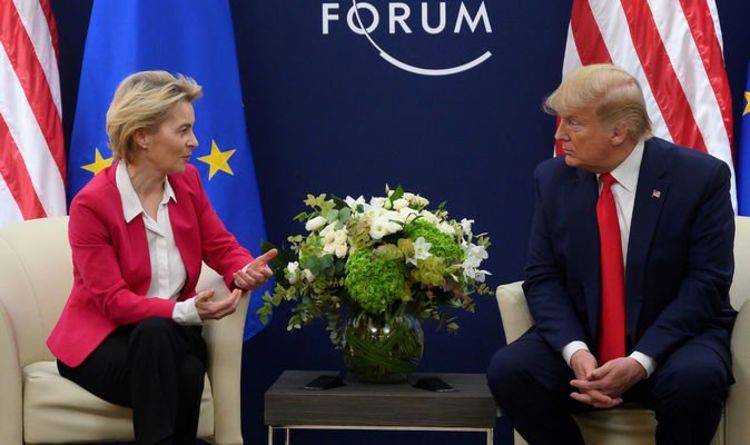 Wilbur Ross suggested Washington could implement crippling trade tariffs on EU products in a move that mimics proposed backlash over plans by several European countries, which provoked fury in the US capital. “Depending on what form the carbon tax takes, we will react to it – but if it’s in essence protectionist, like the digital taxes, we will react,” Mr Ross told the Financial Times. President Trump and EU Commission chief Ursula von der Leyen last week pledged to deescalate the trade tensions between Washington and Brussels.

Officials described their meeting in Davos as positive discussions, with a series of common areas, such as agricultural trade and energy, where deals could be reached fairly quickly.

While China, Russia and India are seen at the main culprits by Brussels, officials have refused to rule out extending scrutiny to the US and other trading partners.

Mrs von der Leyen said: “There is no point in only reducing greenhouse gas emissions at home if we increase the import of CO2 from abroad.

“It is not only a climate issue, but it is also an issue of fairness towards our businesses and our workers. We will protect them from unfair competition.”

Washington and Brussels have yet to find common ground on tackling climate change since Mr Trump announced America’s withdrawal from the Paris climate accord.

Last week Steven Mnuchin, the US treasury secretary, branded a carbon tax as a “tax on hard working people”.

Markus Beyer, director-general of Business Europe, said: “Are we able to fully support it as it stands now? The answer is no. But we are looking into it.

“We think this can be a solution in certain fields. But we still need to solve the question marks.”

Phil Hogan, the EU’s trade commissioner, said predicted a delay in the introduction of any carbon tax.

He said the Brussels-based executive still needs to conduct a number of impact assessments on its possible implementation.

“I’m not going to come to conclusions,” he said.

“I expect it will be 2021 or later this year before we see a paper or some conclusions coming of this process.

“So it’s a bit early to say how it will work. But at least it’s on the agenda.”