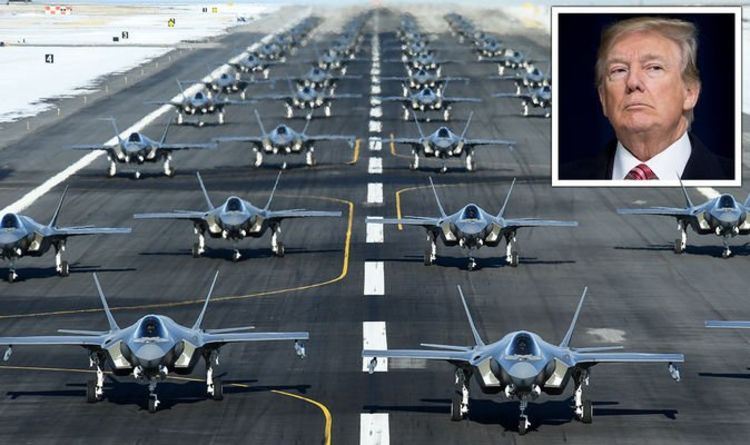 Dozens of F-35A Lightning II stealth fighter jets took to the runway on Monday in Utah for a Combat Power Exercise. The 52 aircrafts were used in the drill conducted by the active duty 388th and Reserve 419th Fighter Wings at Hill Air Force Base.

Together, the aircrafts cost a staggering $ 4.2billion (£3.5billion).

The event showed the Air Forces ability to deploy a large force of the F-35As.

Fighter Wings revealed the F-35s have finally reached the capability of full warfighting.

“This is just the beginning of sustained F-35A combat operations and we will remain focused on staying ready to deploy whenever, wherever we’re needed.”

The exercise was planned for several months, but its execution came in the same week the US continues to brace for Iran to respond to the killing of its top general in Iraq.

The 419th Fighter Wings tweeted they were “ready to fly, fight and win”.

The 388th Fight Wingers said: “The exercise, which was planned for months, demonstrated their ability to employ a large force of F-35As – testing readiness in the areas of personnel accountability, aircraft generation, ground operations, flight operations, and combat capability against air and ground targets.

JUST IN: Iran alert: British ships could be sunk by mini-subs

Last year, the Air Force deployed its F-35A stealth fighter jets to the Middle East for the first time.

The model is branded as the most advanced military aircraft ever sent into the skies.

The Air Force has previously boasted that the jet “improves lethality, survivability and adaptability against emerging threats in order to maintain air superiority”.

An F-35 is the first to combine radar-evading stealth technology with supersonic speeds and the ability to conduct short take-offs and vertical landings.

It has the ability to operate from land and sea and has previously been hailed as a huge leap forward in aerospace technology.

F-35A jets are are the conventional takeoff and landing variant version of the aircraft.

Sean Connery, Actor And The Original James Bond, Dies At 90

Bystaronline@reachplc.com (Brendan Mcfadden) Two police officers were shot as they sat in their squadcar in New Orleans on Friday. One of the officers was shot in...
Read more
World

Mom Dragged From SUV, Beaten By Officers With Toddler In Back Seat Filing Suit

Girl, 13, kidnapped by man, 44, and forced to convert to Islam and marry him

Bystaronline@reachplc.com (Robin Cottle) A 13-year-old Christian girl was kidnapped by a 44-year-old Muslim man in Pakistan who forced her to convert to Islam and marry...
Read more
World

BySydney LupkinMoncef Slaoui, a former GlaxoSmithKline executive, speaks during the kickoff announcement for Operation Warp Speed in the White House Rose Garden on May...
Read more