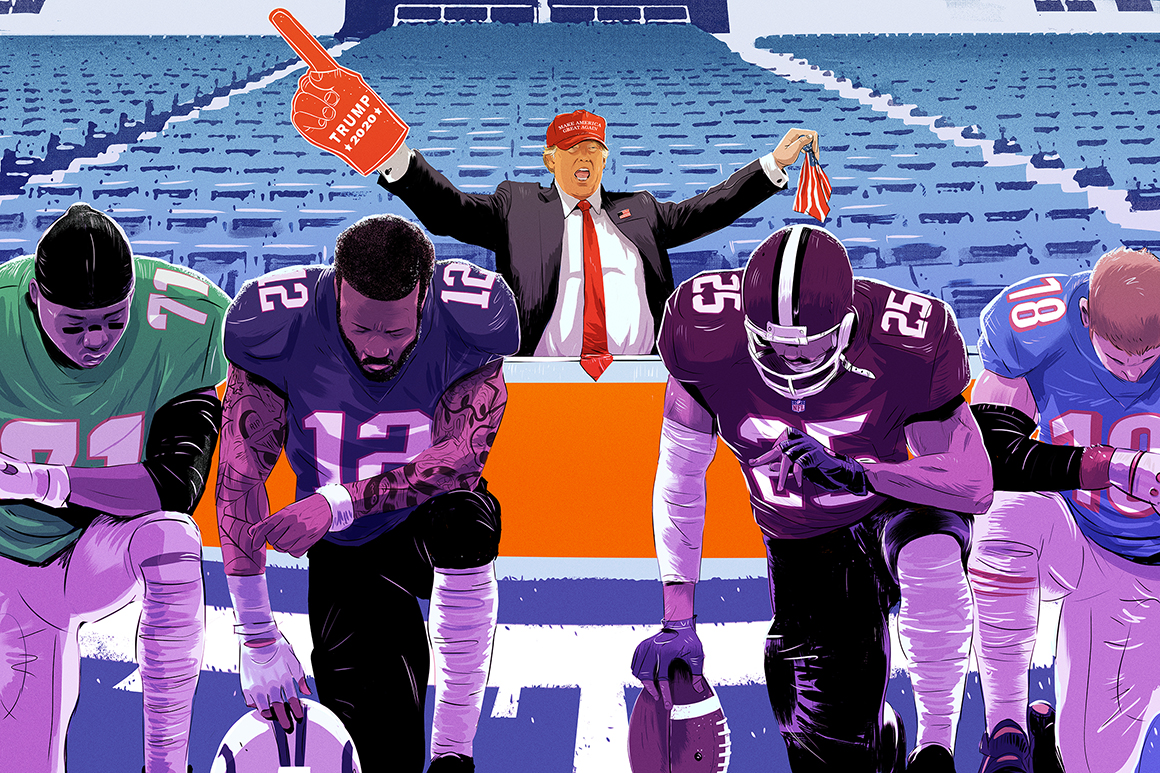 Sensing, correctly, that the balance of power between him and these owners had shifted in his favor, an emboldened Trump only escalated his Kaepernick rhetoric the first fall he was president.

In September at a rally in Alabama, he levied a new strain of assault. “Wouldn’t you love to see one of these NFL owners, when somebody disrespects our flag, to say, ‘Get that son of a bitch off the field right now—out—he’s fired’ …?” he roared. The crowd responded with a crescendo of cheers. “He’s fired!”

Lockhart called Goodell early the following morning to talk about what to do. Hours later, Goodell issued a lukewarm statement labeling Trump’s comments “divisive.” It wasn’t close to enough; this was only the beginning. The next day, Trump took to Twitter to call for a boycott—a president, and a Republican to boot, employing a highly atypical tactic of interfering with private enterprise.

The NFL owners wanted no part of this—even if, as a league source said to ESPN, “they were all pissed at the president.” Even Robert Kraft, the owner of the Patriots, who considers Trump “a wonderful friend,” said he was “deeply disappointed by the tone” of his comments in Alabama. The owners of the Lions, the Dolphins, the Falcons, the Giants, the Rams and the Bills, too, made similar public censures. Jones of the Cowboys kneeled with players on his team before the playing of the national anthem, and Stephen Ross of the Dolphins locked arms with his—at first. The owners, though, quickly became “alarmed at how rapidly fans’ outrage” was “eroding many of the league’s key business metrics,” ESPN reported, and public polling showed the net favorability of the NFL dipping because of the protests—in particular among Trump voters. “This,” said an owner, “could kill football and end our business.”

“We already know in a situation where Colin Kaepernick could’ve actually helped some NFL teams he wasn’t re-signed, and one of the reasons for that—no question—was Donald Trump placing this social pressure, this cultural pressure, on the league.”

The following spring, the NFL stiffened its anthem policy: Players could stay in the locker rooms during the national anthem; if they were out on the field in the view of the fans, however, they needed to “stand and show respect.” Teams with players that didn’t faced fines. “NFL,” read the POLITICO headline, “caves to Trump.”

“Trump,” Tim Miller, the political director of Republican Voters Against Trump, told me, “demonstrated that he wielded enormous influence over the owners around the Kaepernick controversy.”

“We already know in a situation where Colin Kaepernick could’ve actually helped some NFL teams he wasn’t re-signed,” Dave Zirin, the sports editor of The Nation, told me, “and one of the reasons for that—no question—was Donald Trump placing this social pressure, this cultural pressure, on the league.”

“He could make life miserable for them,” Geragos, Kaepernick’s attorney, told me. And he did. “The league,” Lockhart added, “was well aware that a tweet might be coming at any time.”

“This is a very winning, strong issue for me,” Trump told the Cowboys’ Jones in a phone call, according to Jones’ deposition in Kaepernick’s lawsuit that accused the league of colluding to nix his career. “Tell everybody,” Trump told Jones, meaning all the other owners, “you can’t win this one. This one lifts me.”

‘It doesn’t matter this time what Donald Trump says’

Now, though, the NFL could help sink him.

Trump wants the NFL, the institution besides the start of school that tells the country it’s fall, to play its games as slated—“needs it,” national sports columnist Dan Wetzel told me—to foster any semblance of normalcy for citizens addled with anxiety, and perhaps to provide some vague collective psychic boost during the run-up to Election Day, with as ever a certain portion of voters making their choices based on how they feel more than what they might or might not know. In April, less than a month after the World Health Organization declared the outbreak of the novel coronavirus a pandemic, the president said he thought the NFL season should start on time. A few weeks ago, when Anthony Fauci sounded notes of skepticism about the league’s ability to play games safely, Trump lashed back. “Tony Fauci,” he tweeted, “has nothing to do with NFL Football.” He retweeted himself some 8½ hours later.