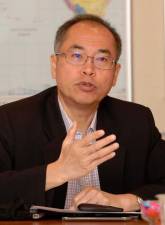 GEORGE TOWN: Penang’s investment authority Invest-in-Penang Bhd has called on manufacturers here to be resilient in the face of the widespread of Covid-19, which has disrupted the global supply chain.

Speaking after a prominent investor – Motorola Solutions Sdn Bhd shut down its facility here after an employee tested positive for the virus, Invest-in-Penang director Datuk Seri Lee Kah Choon (pix) said all remedial measures have been put in placed to address the ill effects.

The shutdown – where up to 1,000 employees are expected to practise self-quarantine – is expected to last 14 days.

“But there is nothing much we can do on the onset. The virus is a global contagion. Life goes on. We have to deal with its repercussions,” Lee told SunBiz.

Lee said factories in the Bayan Lepas Industrial Free Trade Zone have been informed on how to liaise with the public health authorities, while Invest-in-Penang is on standby to offer support.

Lee, who is also the special investment adviser to the Penang chief minister, said the state is monitoring the situation closely.

Reports have emerged that Penang’s factories, which are the heart of Malaysia’s electrical and electronics manufacturing sub-sector, have seen their fortunes affected, barely 12 months after they enjoyed a resurgence due to positive impact from the US-China trade war.

Recall that several investors had relocated from China to Penang to escape the double tariffs levied by both China and US on exporters.

Since early this year, China has stopped importing equipment and goods as their factories stop production in a bid to halt the spread of the virus.

It was reported that Pentamaster Bhd, which enjoyed growth due to the trade war, may be revising its forecast for the 2020 financial year as China has stopped importing its electronic parts.

However, Lee urged investors and workers here not to panic, saying that the situation is under control with every country taking the necessary measures to deal with the outbreak.