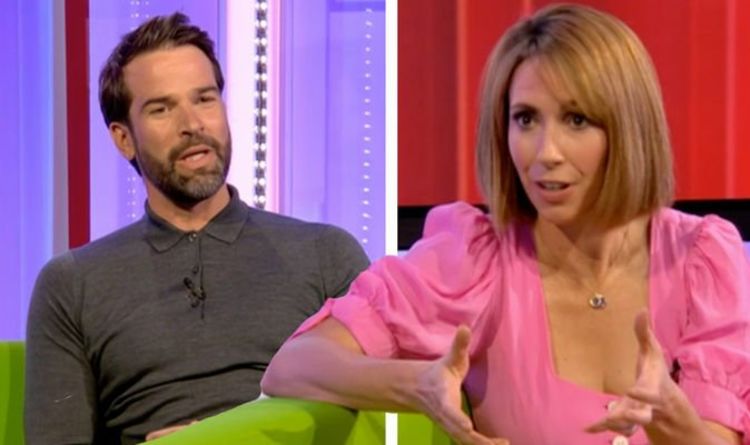 The One Show delighted viewers with a double dose of Welsh presenters this evening as resident host Alex Jones was joined by Gethin Jones on the green sofas in the BBC studio. However, moments into the live magazine show airing, Alex was forced to shut down her co-host after making a joke.

After the titles had rolled, Alex started: “Welcome to The One Show with Mr Jones -”

And Gethin finished off her sentence with: “And Mrs Jones – and just for the record, we’re not married – anymore!”

Shocked but realising he was joking around, Alex hit back: “Don’t start rumours!”

Before clarifying: “I’m technically Thomson,” in reference to taking her husband’s name after they got married.

READ MORE: Alex Jones breaks down in tears on The One Show – here’s why

This isn’t the first time Gethin and Alex has presented, nevertheless, those watching at home love the duo.

Taking to Twitter to comment, one said: “Excellent. I love @GethincJones and @MissAlexjones presenting together. Gethin should be made a permanent presenter on #TheOneShow.”

Someone else wrote online: “Great having Gethin back! Please keep him, love him and Alex together. It’s just like being sat with some friends having a good laugh! Diolch.”

Another suggested: “@BBCTheOneShow love gethin Jones …works well with Alex ..ther you have matts replacement ..and Chris Ramsey as a stand in ..not rocket science !I”

t comes after Matt Baker left his long-time presenting role at The One Show earlier this year.

The BBC said no one person would be replacing Matt, instead a variety of famous faces will be sitting alongside Alex each week.

“We are drawing on our existing family of presenters – made up of men and women – to present alongside Alex Jones,” the spokesperson revealed.