Doom Eternal release date boost: On the fence about Doom... 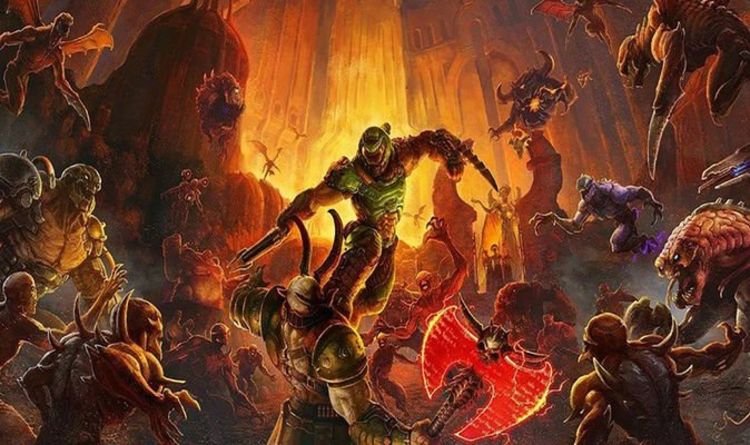 A sequel to the 2016 Doom reboot, Doom Eternal sees players return to Earth in order to stave off a demonic invasion.

Having had a chance to go hands-on with the game before launch, it’s safe to say that Doom Eternal could end up as a contender for the 2020 game of the year.

The first-person action game appears to have all the makings of a great sequel, taking everything that was good about the original, and expanding on it.

Fans can also expect more diverse selection of environments, instead of the same old locations found in the original.

That’s on top of the same blood-soaked gore-tastic gameplay that has made the Doom series such a firm favourite among fans.

If that doesn’t make you want to invest in a copy of Doom Eternal at launch, then Bethesda’s latest behind-the-scenes trailer might.

The new Doom Eternal trailer gives fans a look at the recording of the game’s soundtrack, in particular, the assembly of a heavy-metal choir.

As you can see from the video below, Doom Eternal’s heavy-metal choir includes notable vocalists such as Tony Campos from Ministry and Static X, Sven De Caluwe from Aborted, and Linzey Rae from The Anchor.

“Introducing the DOOM Eternal Heavy Metal Choir: an eclectic group of heavy metal vocalists from diverse backgrounds and experiences that all share one thing in common: a love for DOOM.”

The result of an open casting call, the Doom choir recorded a chant that is said to harken back to the Doom Slayer’s origins. The id Software sound team took the chant and weaved it into the metal soundtrack.

Fans get a brief taste of the soundtrack throughout the behind-the-scenes video, which can be viewed below.

Sound has always played a very important part in Doom. The meaty sound effects help make the gunplay feel supremely satisfying, while the metal soundtrack gets the adrenaline pumping and heart pounding.

It looks like Doom Eternal will take this to the next level when it launches for PS4, Xbox One and PC on March 20.

“As the DOOM Slayer you return to find Earth has suffered a demonic invasion,” reads the official description. “RAZE HELL and discover the Slayer’s origins and his enduring mission to rip and tear…until it is done.

“Experience the ultimate combination of speed and power as you battle your way across dimensions with the next leap in push-forward, first-person combat.”