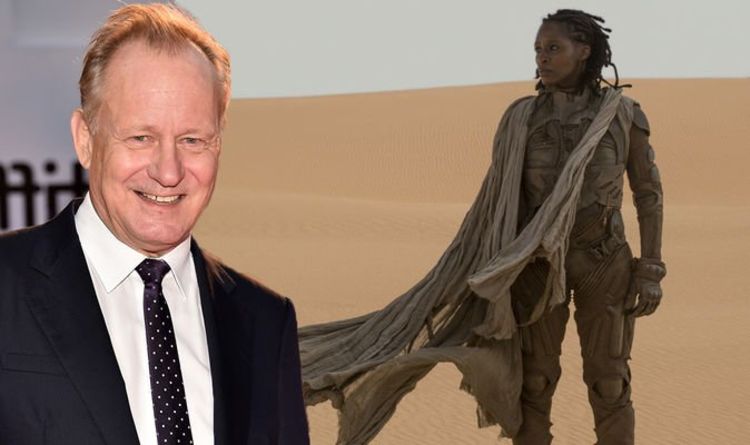 Dune has had a tough life, as it has endured a number of iterations over the years. The 1984 David Lynch version of the classic 1965 Frank Herbert story was lauded as one of the worst adaptations of all time – but director Denis Villeneuve is looking to change all of that with a brand new, high budget picture due out the end of this year.

The cast is perhaps one of the greatest ever collected, with the likes of Timothee Chalet and Oscar Isaac at the helm.

However working against these mighty actors is the behemoth that is Stellan Skarsgard as the horrific Baron Vladimir Harkonnen.

Over the course of Herbert’s original story Harkonnen quickly makes a name for himself as the most dreadful human being in the galaxy.

Recently, Skarsgard spoke exclusively to Express.co.uk about his new film The Painted Bird, and offered a few words about the upcoming sci-fi epic.

Touching upon the highly anticipated ride that is Dune, Skarsgard confessed: “It’s artistic mainstream, you could say.

“Of course, it is Denis Villneuve. And, again, you will see a director that works with a cinematic language.

“When you see a Denis Villeneuve film you know it is not just any director – it is him.”

Going on to talk about how the film will look and feel, Skarsgard continued: “In that sense he is a true artist.

“And I think, as with all his films, the atmosphere [in Dune] will be fantastic in it.”

Skarsgard then went on to compare Dune to one of Villeneuve’s previous works, saying: “If you look at a film like Arrival – which I thought was wonderful – but what carried it was the slow pace where everything could sink into you.”

Although Dune has already been adapted once, it was not exactly well liked.

Skarsgard referenced this, saying: “But his approach is… he’s making a big budget film. So it’s sort of – it has all the ingredients of a sci-fi film.

Fans have been encompassed by rumours that the trailer for Dune is just around the corner – but with no official confirmation just yet, they will certainly have to wait.

Earlier this year executive producer of Dune John Harrison spoke about his hopes for the film.

Harrison previously created the Dune TV series, of which he then followed up with a sequel: Children of Dune.

On the 2020 film Harrison said: “I haven’t met Denis – however I am a huge fan – and I was thrilled when Legendary was able to sign him to the project.”