Eamonn Holmes furious at This Morning caller over Phillip Schofield mistake: 'Cancel her!' 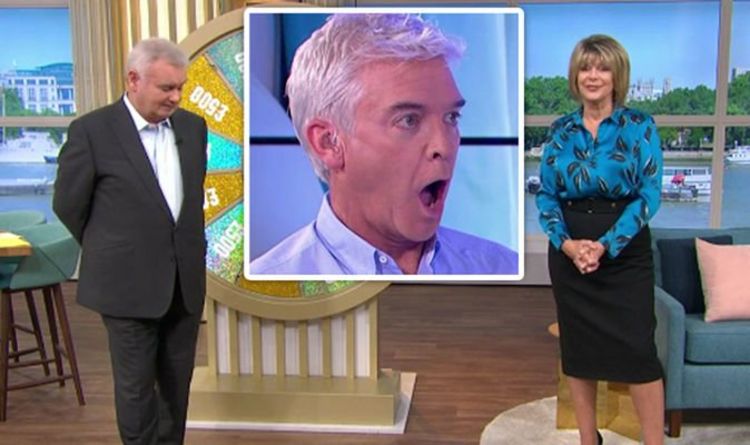 Eamonn Holmes, 60, was on hand to present Friday’s edition of This Morning alongside wife and co-host, Ruth Langsford, 60. Just half an hour into today’s show, the pair got ready to play Spin to Win, a game segment which has brought some light relief to ITV viewers during the coronavirus crisis. After several dud calls as they tried to get hold of one member of the public who had entered to play, the hosts finally got through to player Jessica. However, she left the broadcaster furious as she thought the presenters on-screen were Phillip Schofield, 59, and Holly Willoughby, 39.

The rules of Spin to Win state a caller must answer their phone with the code word revealed at the beginning of the show, rather than saying “Hello.”

As they host the show four times a week, Phillip and Holly are usually on hand to welcome viewers to the programme.

Part of the presenting schedule, however, involves Eamonn and Ruth to oversee proceedings on Fridays and during the school holiday shifts.

Ready to play the game segment today, the husband and wife duo had to ring several callers as no one picked up.

When Jessica picked up, she answered with the code word and was over the moon to be accepted but in the midst of her excitement, made a mistake which left Eamonn a bit annoyed.

As Jessica said “Bee’s knees” the duo let out a celebratory roar before Eamonn asked: “Who is that?”

“Are you kidding me?” she replied, adding: “I can’t actually believe I’m talking to Phil and Holly.”

The host immediately corrected her as he said: “No, you’re not talking to Phil and Holly – it’s better than that.

“Cancel her, move on, next one,” the presenter joked as he voiced his momentary fury about being mistaken for his colleague.

The caller replied: “Oh lord, Eamonn Holmes. My god, I’m talking to Eamonn Holmes,” seemingly more distracted by the host than the game.

“Go on, do it hard Eamonn,” she eventually said as she got her head back in the zone, which left the host chuckling.

Spinning the wheel with some power, the presenter managed to win the player a total of £1,000 and she couldn’t have been happier.

“You’ve made my day,” the caller told the hosts, before asking if she should stay on the line to speak with them some more.

ByBrian Grazer and Ron Howard, during WSJ's Tech Live 2020, talk about consumer trends toward home entertainment and say that cinema will return as...
Read more

ByErin Silvia Jared Leto shared a new eye-catching photo of himself showing off his muscles on Oct. 21, the same day it was reported he...
Read more