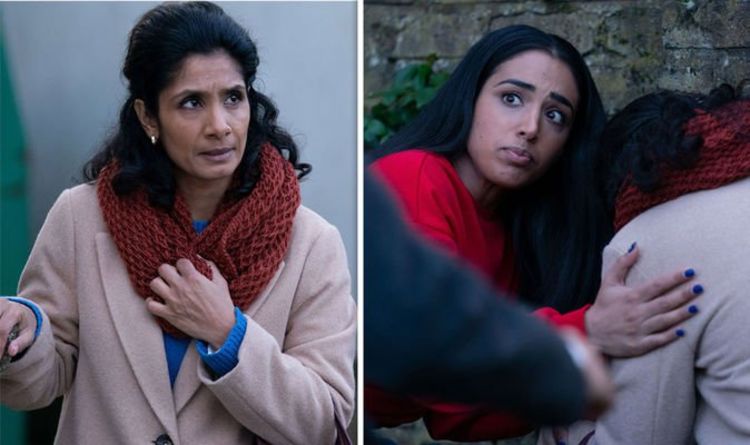 Suki Panesar (played by Balvinder Sopal) is set to storm the square to try in the hopes of seeing her family, but tragedy is set to strike as she collapses as she goes to clear the air with her daughter Ash Kaur (Gurlaine Kaur Garcha). Later on the boys are set to reveal that their mother has been hiding a tragic secret.

Walford might not be ready for Suki’s arrival but she will very quickly make an impression on Jean Slater (Gillian Wright) when she sees Suki ordering her sons around.

However, Suki is here to see Ash and she isn’t going to waste any time in searching for her.

As viewers know, the relationship between Suki and Ash has been strained over the years, but Suki wants to build bridges.

As soon as she touches down on the square she immediately heads towards Ash’s house only to be stopped by Kheerat (Jaz Deol).

Kheerat rushes over to stop him mum making any rash decisions, having worked really hard to strengthen the relationship with his estranged sister over the years.

But as the mother and daughter come face to face tragedy will strike and Suki will be put in deadly danger.

Suki will collapse outside Ash’s house and as her children rally around her suspicions are raised.

The mother could be playing games with her children, but the closer she gets to Ash, the more questions the daughter will have.

Executive Producer Jon Sen added: “It has been clear since their arrival that the Panesar siblings live under the shadow of an overbearing matriarch and in January, Suki Panesar arrives in Walford, determined to make her presence felt.

“Balvinder brings a unique blend of steeliness and charm to the role and I can’t wait to see her grace our screens in January.”

“In the classic tradition of the EastEnders matriarchs, she comes in and gives shape to that family.

“You suddenly see why these boys and Ash are like they are. I mean, they arrived as men and you suddenly see that they are, in fact, little boys who need their mum.”