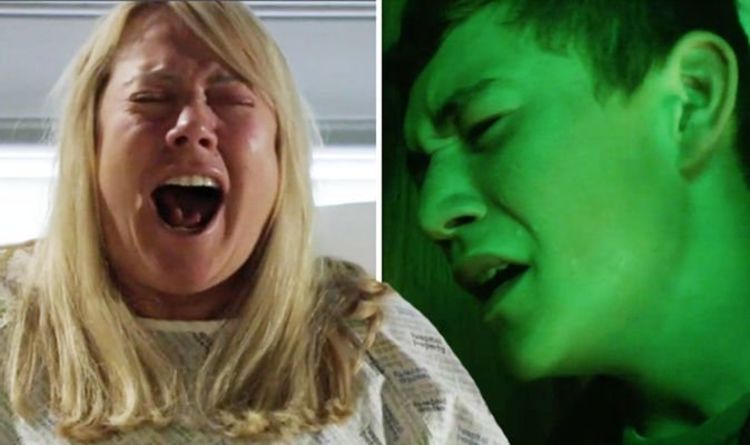 Dennis (played by Bleu Landau) defied his mother Sharon Mitchell’s (Letitia Dean) orders by making his way onto the doomed voyage as EastEnders marked it’s 35th anniversary this week. Unfortunately, his wayward ways caught up with him and Ian Beale (Adam Woodyatt) was the one to teach him a lesson as he locked the teenager in the chamber of the vessel before disaster struck. Although the youngster made it off the flooded boat in this evening’s edition of the BBC soap, scenes towards the end of the episode showed he was the unlucky victim of the disaster. However, viewers weren’t too happy.

As the groundhog day theme played throughout the week came to an end, the events of the rescue mission played out in real time tonight.

With the vessel quickly filling with water, Ian made desperate attempts to free Dennis from his prison after losing the keys to the chamber.

Although he smashed a hole in the door, there was a struggle to get the troublesome character out and by the time they reached dry land, emergency services were waiting to attend to the pair.

Valiant efforts were made to save Sharon’s son’s life, but it was unsuccessful as he was revealed to be the victim of the anniversary disaster and viewers quickly took to Twitter to voice their outrage.

One posted on the social media platform: “Called it. What a shame. The potential future storylines Dennis had in the future and they’ve killed him off. #EastEnders #EastEnders35.”

Another added: “Oh s*** I did not have it down that Dennis would die. How tragic he’s so young.  #eastenders .”

Whilst a third commented: “It’s Denny! As much as he is a pain in the a*** he shouldn’t die like that!  #EastEnders.”

A fourth remarked: “They’ve killed off Denny. I can’t cope. His character had so much potential. Man, I’m emotional #Eastenders #Eastenders35.”

However, what Sharon doesn’t know is Ian had some involvement as to why her son was trapped on the boat when it began to sink into the Thames.

The coming weeks will see the repercussions of the teenager’s death play out, but it’s not been confirmed what exactly this will entail.

Teasing the future of the soap after Dennis demise, Head of Continuing Drama Kate Oates explained why he was the character who needed to be killed off.

Speaking with press, including Express.co.uk, the soap boss said: “It’s true of any soap or drama – you want consequence.”