Ebola outbreak 2020: Is there a cure for ebola? New outbreak in Congo 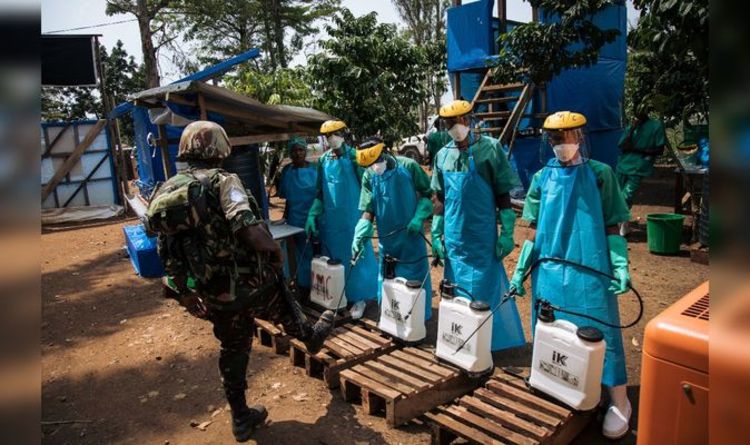 Is there a cure for Ebola?

Ebola is a highly infectious virus that can kill up to 90 percent of the people who catch it, bringing terror to countries and communities.

Ebola’s rate of infection is so high that patients need to be treated in isolation by wearing protective clothing.

According to Doctors Without Borders, medical teams can help manage the symptoms of the virus by keeping patients hydrated, and by using pain-relief medication to help with fever and blood pressure.

A patient who recovers from Ebola immediately becomes immune to the strain of the virus they have contracted.

What are the symptoms of Ebola?

Early on, the symptoms of Ebola are non-specific, which makes it very difficult to diagnose.

DWB writes: “The disease is often characterised by the sudden onset of fever, feeling weak, muscle pain, headaches and a sore throat.

“This is followed by vomiting, diarrhoea, rashes, impaired kidney and liver function and, in some cases, internal and external bleeding.

“Symptoms can appear from two to 21 days after exposure. Some patients may go on to experience rashes, red eyes, hiccups, chest pains, difficulty breathing and swallowing.”

DWB’s emergency coordinator Henry Gray, said during the 2012 outbreak in Uganda: “Health workers are particularly susceptible to catching it so, along with treating patients, one of our main priorities is training health staff to reduce the risk of them catching the disease whilst caring for patients.

“We have to put in place extremely rigorous safety procedures to ensure that no health workers are exposed to the virus – through contaminated material from patients or medical waste infected with ebola.”

Ebola can be caught from both humans and animals, and is transmitted through close contact with blood, secretions or other bodily fluids.

Healthcare workers have frequently been infected while treating Ebola patients.

In certain areas of Africa, infection has been documented through the handling of infected chimpanzees, gorillas, fruit bats, monkeys, forest antelopes and porcupines found dead or ill in the rainforest.

ByBy Dan Goldberg and Alice Miranda Ollstein “These numbers will not change unless we change,” DeWine said Tuesday. “By more of us wearing masks, by...
Read more

ByRussian and Chinese state actors have been accused of launching cyber attacks on the UK. Amid these threats, the former civil servant warned Britain...
Read more