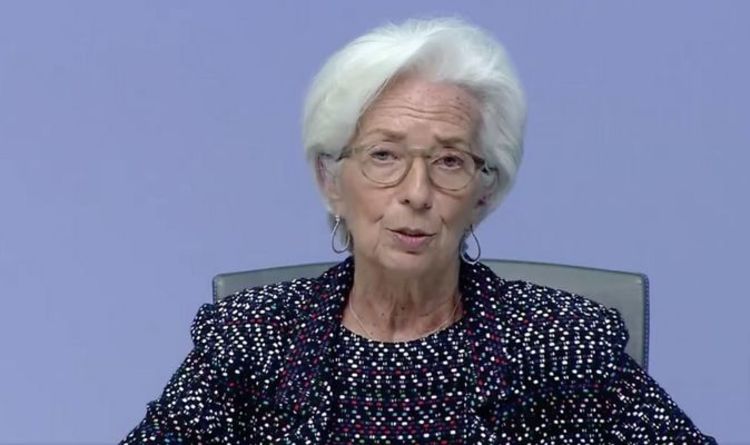 Speaking at a virtual press conference this afternoon, Ms Lagarde said the bank expects a GDP contraction between five and 12 percent this year – which could have lasting consequences for the UK.

The scale of the contraction depends on the length of the pandemic and government shutdowns.

The ECB President said: “The euro area is facing an economic contraction of a magnitude and speed that are unprecedented in peacetime.”

She said the eurozone’s decline is likely to steepen before a recovery phase kicks in and warned the duration of the economic decline could not yet be determined.

One political commentator has pointed out that while the warning only applies to the eurozone, of which the UK is not a part of, it does have implications for Britain.

He wrote on Twitter: “Five percent is ballpark equivalent to the 2008 recession.

“12 percent is like nothing Britain has experienced in a century.

“Lagarde’s comments obviously apply to the EU / eurozone but given the similarities in COVID-19 response in the UK, we can take them as reasonably indicative for the UK too.

“If GDP does take a 12 percent hit (on the bad side of the range, though not necessarily the worst it could be), then the amount of debt – and bad debt – in the system will be immense, and could easily snarl up banking operations as they assess their own solvency.”

During today’s press conference, Ms Lagarde said the ECB expects to remain in crisis-fighting mode well into next year.

She said: “We are looking at way down and probably out in 2021 in terms of return to a “new normal”.

The ECB President said the bank “very much” hopes the crisis will not become a permanent one.