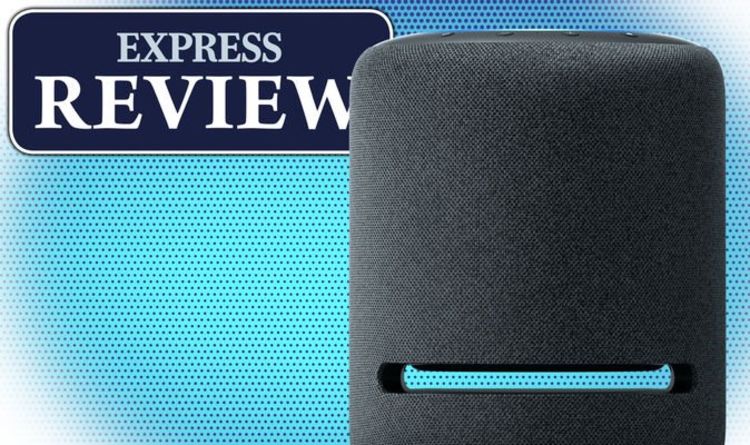 Amazon’s Echo smart speaker range isn’t short of smarts – the talkative AI Alexa can order takeaways, turn on lights, manage your calendar, send texts, and much more – but it hasn’t ever set pulses racing with its capabilities as a speaker.

That’s where the Echo Studio comes in.

Amazon says its £189.99 Echo Studio is designed to play “music as the artist intended”. While that’s almost certainly marketing bumpf, the five omnidirectional speakers squeezed into Echo Studio should handle your music much better than anything previously launched by the Seattle-based retail company.

Until now, Amazon has always prioritised the smart part of its smart speakers, with audiophiles who wanted to benefit from all the clever voice assistant stuff asked to plug their Echo into an existing sound speaker with 3.5mm plug, or synced over Bluetooth. But that all changes with the Echo Studio. So, what’s it like?

Express.co.uk has been listening to some of our favourite tracks on the speaker for a few weeks now. Here’s how it stands up against the competition.

First of all, the Echo Studio is much bulkier than your standard affair, measuring in at 206mm tall and 175mm across. So, if you’re limited for space and deciding whether to buy an Echo Dot or an Echo Studio for your kitchen counter – you’ll definitely want to reach for the measuring tape before you place your order.

At 3.5kg, it’s much heavier than you might expect. That’s not a problem as you’re unlikely to be lugging it anywhere, but it’s still something worth knowing if you’re planning to squeeze it onto a rickety shelf above your bed.

Bulk aside, the Echo Studio looks pretty good. It’s nowhere near as attractive as the Sonos One, but for our money, it’s prettier than the Pringles-esque design of the original Amazon Echo. In a touch reminiscent of the Apple HomePod, Amazon has covered the outside of the speaker in fabric. At the top, you’ll find the usual buttons found on all Echo speakers, including volume buttons and a mute switch to electronically disconnect the microphones to stop Alexa listing in.

Like all previous Echo devices, you’ll still find the trademark ring of LEDs around the top of the Echo Studio.

These glowing lights can be used to alert you when a recent Amazon order has shipped. And will illuminate the direction that the microphones are aiming to pick-up your voice. This is an incredibly useful visual clue to see whether Alexa is listening to another voice in the room, or have zeroed-in on your command.

It’s much better than rival Google Home devices, which use lights to show that it has heard the wake phrase – but nothing else. Amazon does a much better job of reassuring users that its screen-less devices are listening to the right thing.

At the back of the Echo Studio, you’ll find a 3.5mm audio port to plug the smart speaker into an existing speaker set-up.

Well, this is what the Echo Studio is really about. Sure, it looks pretty good. And of course, it’s capable of all the amazingly clever stuff you’ve become accustomed to from Alexa over the years – but does it sound any good?

Thankfully, the answer is a resounding “yes”. For its size, the Echo Studio delivers a really full soundscape. There is a hefty amount of bass from the speaker, but it’s not overwhelming. You don’t need to worry about it distorting everything else, like you get from most Beats-branded Bluetooth speakers.

While the standard Echo speakers are perfectly fine for listening to talk radio, getting news briefings, weather updates – if you use the smart home gadget as your main way of tuning into Amazon Music, Spotify, or Apple Music, then the upgrade to the Echo Studio is well worth the £189.99 asking price.

Don’t be fooled by its squat size, the Echo Studio can get plenty loud. Sure, it can’t quite match the Apple HomePod in terms of sheer volume (Apple often uses a single or pair of its smart speaker to DJ to its expansive retail stores) but it’s more than loud enough to boogie while cooking, or fill the living room with music at your next party.

Amazon Music HD sounds noticeably better on the speaker, although that service comes at a premium cost.

And finally, the best trick up the Echo Studio’s sleeve is the ability for it to double-up as soundbar. Yes, you did read that correctly. If you already own an Amazon Fire TV streaming stick, the retail giant lets you pair its speaker with the HDMI dongle to bring a soundbar-like experience to your next Netflix binge-watch.

Pairing two with the streaming dongle results in what Amazon calls a “Dolby Atmos home theatre set-up” – a nifty bonus brought about by the built-in Dolby Atmos technology. In our experience, the Echo Studio sounds brilliant as a TV speaker.

Amazon handles all the really complicated stuff and we had none of the issues with the audio not being synced with the images on-screen – something that initially plagued us with the much, much pricier SONOS Beam. Amazon does a great job of creating a very three-dimensional sound from the speaker. And if you’re really looking to spice up your Prime movie viewing you can add an extra pair of standard Echo speakers to create a surround sound-like experience.

At £189.99, the Echo Studio is much pricier than the standard Echo (£89.99). However, when compared to the Echo Plus, which has an RRP of £139.99, the Echo Studio seems like a real steal – especially since it has the same built-in Zigbee smart home hub technology that saves needing to add branded bridges to your router to get your smart home kit up-and-running.

Echo Studio is pretty reasonable compared with most comparable rivals. It doesn’t quite sound as good as the SONOS ONE (Gen 2) but that starts from £199.99 (the cheaper £179 Sonos One SL doesn’t have Alexa or Google Assistant built-in, so isn’t a fair comparison to make) so it costs a little more.