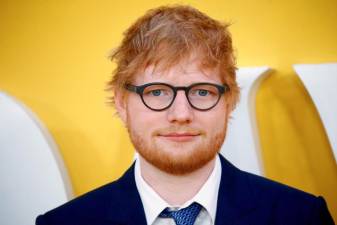 BRITISH singer-songwriter Ed Sheeran said on Sept 1 his wife had given birth to the couple’s first child, a girl who they had named “Lyra Antarctica Seaborn Sheeran”.

“Last week, with the help of an amazing delivery team, Cherry gave birth to our beautiful and healthy daughter,“ the record-breaking musician said on Instagram alongside a photo of a pair of tiny socks.

“Both mum and baby are doing amazing and we are on cloud nine over here.”

The 29-year-old singer is the most successful British artist of the last decade, spending a total of 79 weeks at the top of the charts with eight no.1 singles, including the global smash Shape of You, and four studio albums.

He married childhood school friend Cherry Seaborn in January 2019, according to the video for his song Put It All On Me.

Lyra is the name of the protagonist in Philip Pullman’s His Dark Materials, a trilogy that Sheeran choose as his book on the BBC radio programme Desert Island Discs in 2017. – Reuters

UP TO to 90 whales have died after becoming stranded in a remote bay in southern Australia, with rescuers warning Sept 22 the mission...
Read more
Entertainment

THE creators of big Emmy winner Watchmen, a timely blend of superheroes and political satire that confronts US racism, say they are proud to...
Read more
Entertainment

CHINESE tech giant Tencent’s WeChat messaging app has seen a surge in downloads in the United States since Sept 18 after Washington confirmed it...
Read more
Entertainment

For browsing the web and watching Netflix, users could find themselves staring at a 6.5-inch FHD Infinity-O display which is sure to offer Samsung's...
Read more