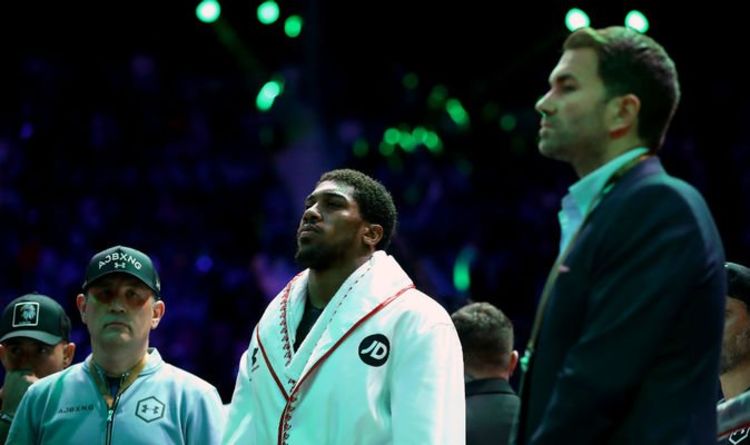 Eddie Hearn admits a serious delay to Anthony Joshua’s showdown with Kubrat Pulev could prompt him to pursue a heavyweight title unification fight with Tyson Fury. Joshua was scheduled to defend his unified titles against the Bulgarian at the Tottenham Hotspur Stadium on June 20.

The coronavirus outbreak, however, has laid waste to those plans and seen Joshua’s homecoming postponed.

July 25 is the new tentative date for the pair’s meeting, which was originally meant to take place in October 2017.

But with no end date in sight for the banning of mass gatherings, it’s unsure if the fight will even take place in July.

Hearn, who is still the process of drawing up further contingency plans, is all to aware of that fact but remains optimistic the fight will go ahead as planned.

JUST IN: Tyson Fury would ‘outbox’ Anthony Joshua rather than KO him

He added: “If it goes beyond that, the conversation may go straight to the fight with Tyson Fury in October or November.

“There’s a contract to fight Pulev and Fury has to fight Deontay Wilder, but anything is possible in this crazy world.

“It might get to stage where if AJ has not boxed Pulev for months, he starts thinking he’s getting older, he doesn’t want the big fights to slide and this might be his only chance to become undisputed heavyweight champion. For AJ, it’s all about the legacy.”

In order for a heavyweight title unification fight between Joshua and Fury to take place in the autumn, the pair’s respective promoters will have to convince Pulev and Wilder to sit on the sidelines.

Team Fury are reportedly eager to get out of their obligation to have a trilogy fight with Wilder, whom ‘The Gypsy King’ dethroned in February.

Wilder, however, will likely need to receive a hefty payoff to forego his rubber match with his successor atop of the summit of the WBC’s heavyweight rankings.

The third instalment of Fury vs Wilder was scheduled to take place in Las Vegas on July 18.

But like Joshua vs Pulev, the COVID-19 outbreak has led to the postponement of the contest, which has been rescheduled for October.

ByMELINDA WONG SOK HUA does not conform to any rules or order in her illustration, sketches, and acrylic paintings. She is not confined to...
Read more