EE, Vodafone and Three customers warned they could be paying too much for their phones 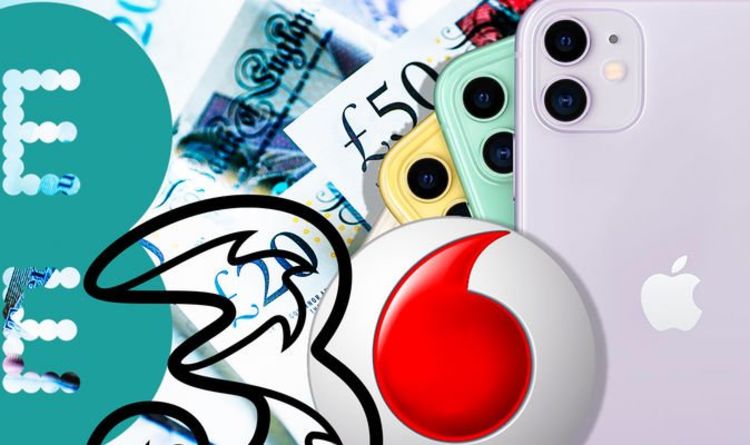 Three Mobile, EE and Vodafone users may be overpaying for their smartphones by as much as £444 per year. New research from Which? suggests a number of consumers are being charged a price that is too high once their initial deal ends.

If you weren’t aware, when buying a new smartphone on contract a large part of the monthly payment goes towards paying for the actual handset.

But once the usual 24-month plan ends consumers can then switch to much cheaper SIM-only deals as they no longer need to pay for the device.

Last year, Ofcom secured voluntary commitments from a majority of the UK networks who offer bundled deals to reduce prices for out-of-contract customers. This is aimed at reflecting the fact they should no longer be paying a charge for their handset.

This all came into effect in February 2020.

However, the research from Which? suggests that some networks are still leaving customers on expensive plans that they don’t need anymore.

According to the consumer champion, the worst affected were Three Mobile users, with the network deciding not to apply any discount to bundled customers when their contracts end.

Around four in 10 (43%) Three customers whose contracts had ended in the last six months claimed they saw no price drop at the end of the term – meaning they were in effect continuing to pay for a handset that has already been paid off.

Based on current contract costs, that could leave a Three customer with a Samsung S20 5G phone paying £37 a month – or £444 a year – more than the provider’s equivalent airtime deal for their bundle.

For EE customers it was two in five (40%) that saw no drop in price, and for Vodafone, it was three in 10 (31%). Discounts applied by EE and Vodafone only come into effect three months after customers have gone out-of-contract, which means that some of these customers may not have yet seen a change in their monthly costs.

Out-of-contract bundled customers on O2 (direct customers), Tesco Mobile and Virgin Mobile are less likely to face such hefty overpayments, as these providers told customers they would see their bills reduced to the equivalent 30-day, or best available, airtime deal.

Natalie Hitchins, Head of Home Products and Services at Which?, said: “While some mobile firms have taken action to end overpayments, our research suggests that others could do a lot more to ensure that customers are not being exposed to rip-off charges.

“Ofcom should ensure that all providers are treating their customers fairly and have taken enough steps to stop people overpaying. In the meantime, it is really important that customers don’t wait. If you think you might be out of contract or overpaying, check your phone bills to see if you can save money with a SIM-only deal or with an upgrade to a new phone.”

In response Three said it has the most competitive prices and the firm does everything it should in terms of notifying the customers and moving them to the best contracts for them.

A Three spokesperson said: “Three has some of the lowest prices and unmatched propositions in the market. We’ve always put customers first and continue to do so.

“Applying an arbitrary discount to tariffs will not effectively tackle what really matters – helping customers to find a contract which is both best-suited to their needs and priced fairly is what we do.

“We allow our customers to choose what they do when they reach the end of their fixed term commitment. To ensure that they can make an informed choice, we send all customers a notification before the end of their contract which shows them what they are paying for now, what an equivalent SIM only tariff is and also a SIM only tariff based on their actual usage. Our goal is to allow customers to pick the right sized tariff for them, but most importantly give them the freedom to choose. Our research shows that this has been a highly effective way to increase customer engagement: the significant majority of our handset customers have chosen to upgrade after receiving an end of contract notification this year.

“As the leading campaigner for easy switching for the mobile industry, we are working hard to create a market where customers are engaged and happy, by pushing for easier switching, all handsets to be unlocked, end-of-contract notifications and best tariff advice.”

“Since May 2020, we automatically give handset customers a 10% discount off their monthly bills once they have been out-of-contract for three months. We ensure customers are fully informed about their contract pricing and send reminders to encourage them to choose the right deal for them when their contract ends.

“Before the mandatory introduction of end-of-contract notifications in February 2020 we already led the industry by contacting mobile customers a number of times before their contract ended, as well as afterwards, clearly informing them of their options.”

Amazon delayed its bombastic Prime Day sale, which despite the name is actually more of a two-day event these day, back in July due...
Read more
Tech

Virgin Media has announced details of a new trial, which seems designed to show-off the colossal headroom available in its fibre broadband network. After...
Read more
Tech

Amazon is about to reveal a bunch of new devices and they could make the Alexa-powered gadgets currently plugged-in at your house look massively...
Read more
Tech

Android users beware: downloading these popular apps will leave you with a nasty shock

Android users are being placed on high alert yet again after a trio of apps have been discovered on the Google Play Store that...
Read more
Tech

Why you'll regret buying an Apple Watch at this price

And if you're looking for a good deal, the newly-launched Apple Watch SE (the second new model announced at the Apple event last week) could be...
Read more