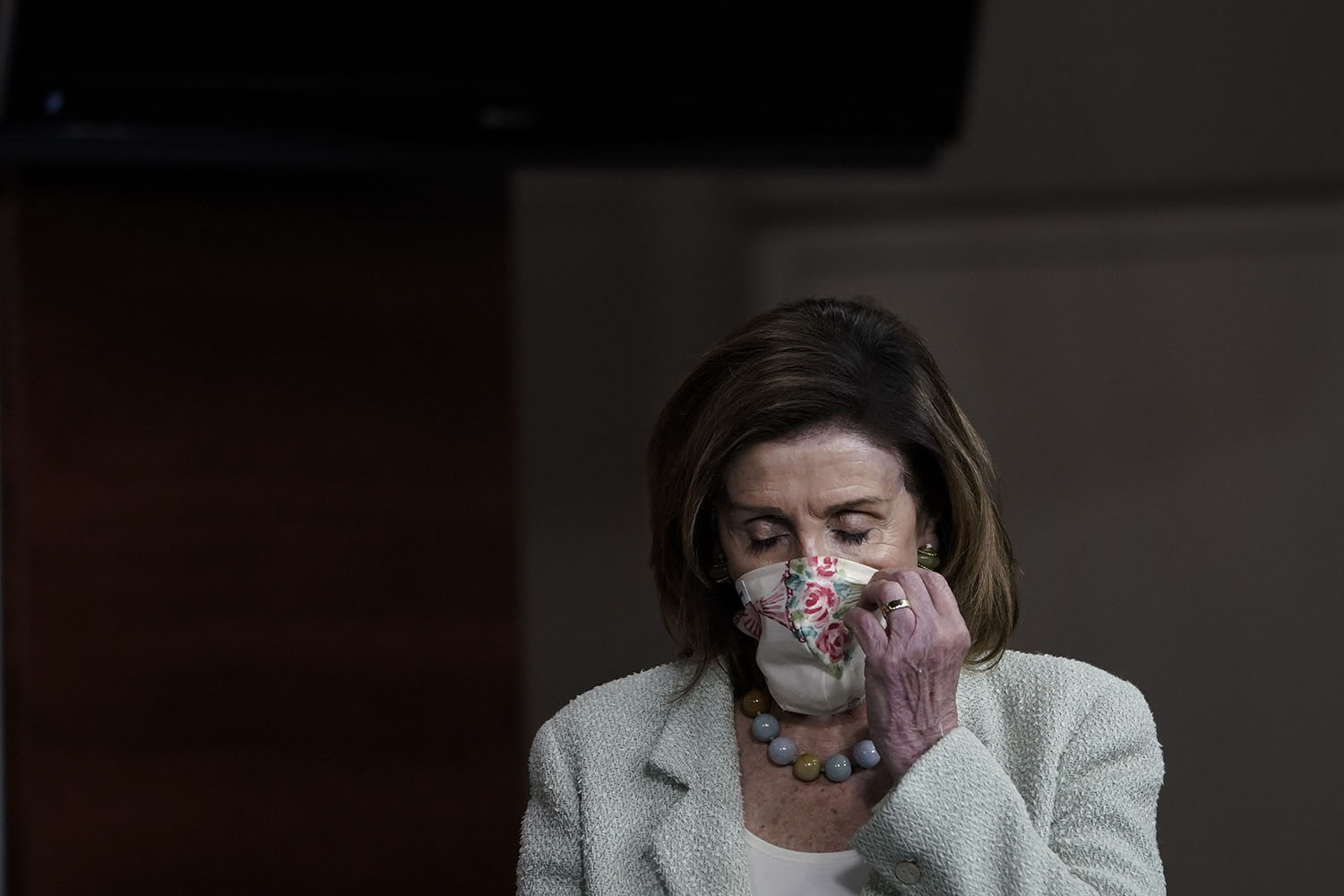 Speaking to reporters Thursday, the California Democrat blasted Republicans — at the urging of Trump — for “abandoning their commitment” to national security.

“This has always been bipartisan,” Pelosi said at a press conference. “All of the sudden, [Republican] commitment to national security disappeared by a tweet, the twinkle of a tweet.”

By Thursday afternoon, the House overwhelmingly voted to go to conference with the Senate. Lawmakers also agreed on who should represent the chamber in the negotiations: Democratic Reps. Jerry Nadler (N.Y.), Adam Schiff (Calif.) and Zoe Lofgren (Calif.) and GOP Reps. Jim Jordan (Ohio) and Devin Nunes (Calif.).

Negotiations between the House and Senate on the FISA bill are expected to begin quickly, though it’s unclear how long before a final bill is ready.

House Majority Leader Steny Hoyer (D-Md.) announced Thursday afternoon that the chamber would not return to Washington next week. Lawmakers would receive 72-hours notice before they will need to vote, Hoyer said.

The House had been expected to easily approve the FISA bill this week, with an unusual alliance of Republicans and Democrats who carried a similar version across the floor in March. The Senate passed the measure with than 80 votes in favor, including 45 Republicans. But that fragile coalition collapsed this week as Trump suddenly intervened, issuing a veto threat that seemed to contradict his own administration’s efforts to renew the law.

GOP support for the measure quickly crumbled, forcing Democrats to summon the votes on their own. Republicans who had once endorsed the measure railed against it Wednesday and Thursday, even though the bill had undergone modest changes — all in the direction of increasing limitations on the FBI’s data collection.

“We want to make sure it’s not abused like it’s obviously been abused,” said Rep. Jim Jordan (R-Ohio), who supported the earlier version of the bill. “You don’t have the votes because we need more work done on this to correct it.”

But the Democratic caucus was facing its own revolt from the left, with about 100 progressives refusing to back legislation they saw as undermining the privacy rights of Americans. And last-minute language from senior Democrats close to Pelosi, like Schiff, further muddied the waters for an uneasy left wing.

Trump celebrated the bill’s demise in a Thursday morning tweet, calling it an “incredibly important blockage” and telling Republicans, “Fantastic job!” for uniformly opposing the measure they once backed.

The retreat by Democrats comes after hours of frenetic, but ultimately unsuccessful, maneuvering by Pelosi and her leadership team on Wednesday. But it had been clear for much of the day that Democrats would not be able to win over enough progressives to pass the bill and send it to Trump’s desk.

Trump has rooted his objections to FISA renewal in his disputed claims that the FBI abused its surveillance powers to monitor his campaign in 2016. Though an inspector general review found that a FISA warrant to monitor former Trump campaign aide Carter Page contained significant flaws and omissions, he didn’t conclude whether it would have been enough to invalidate the application altogether.

Trump has spent recent weeks accusing President Barack Obama of committing crimes against him without any evidence and which Trump linked to his sudden opposition to the FISA measure in the House.

Trump’s animus toward senior FBI leadership over the issue has motivated him and other Republican allies to call for dramatic reforms to the FISA law, even over the efforts by Attorney General William Barr to preserve it unchanged.

Justice Department officials have indicated that the failure of congressional efforts to reauthorize FISA don’t pose an immediate, urgent problem. John Demers, the head of the department’s National Security Division, said in an interview on Wednesday afternoon that the department, for the time being, can make do without Hill action.

“We’re going to have to look at where we can fill in the gaps using criminal tools,” he said. “They’re not perfect. Foreign partners are not crazy when we use their information as the basis of criminal tools, because we don’t have the same protections that we do to protect underlying information as we do on the national security side. We are going to do the best we can to fill those holes and keep those investigations going.”

The department can keep using FISA authorities for investigations that were underway when those authorities lapsed, as Julian Sanchez detailed at Just Security.

The most significant defections seemed to come from Democrats, whose objections mounted this week after key committee leaders negotiated an amendment to restrict the FBI’s ability to monitor Americans’ web browsing history. A nearly identical amendment offered by Sens. Ron Wyden (D-Ore.) and Steve Daines (R-Mont.) failed in the Senate by a single vote, and seemed poised to secure bipartisan support in the House.

House leaders had agreed to consider a version in the House offered by Lofgren and Rep. Warren Davidson (R-Ohio), which closely mirrored the Wyden-Daines proposal. The language included a tweak negotiated between Lofgren and Schiff specifying that the effort was limited to protecting the browsing data of “U.S. persons,” as opposed to foreign nationals. Sources involved in the negotiations indicated that Wyden supported the tweaked language — and he issued a public statement backing it early Wednesday.

But Wyden reversed himself after a comment from Schiff in The New York Times appeared to suggest that the amendment could be used by intelligence agencies to make broad web browsing data requests — sweeping up Americans’ information — under the guise of pursuing foreign nationals’ data. Wyden blasted Schiff’s characterization in a subsequent statement and withdrew his support for the amendment.

A Democratic official involved in crafting the bill downplayed the significance of the Schiff-Wyden spat, noting that if Republicans had remained aboard, the measure would have passed easily.

“This was a bipartisan compromise bill that passed the Senate by a wide margin, but when the bipartisanship goes away so do chances for passage,” the official said.

Betsy Woodruff Swan and Marianne LeVine contributed to this report.