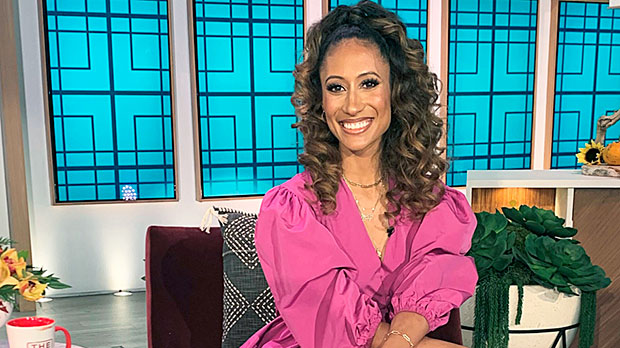 ‘The Talk’ fans are about to be introduced to an amazing new co-host: Elaine Welteroth. Learn more about the journalist and ‘Project Runway’ judge who once headed ‘Teen Vogue’.

It’s official: The Talk has snagged Elaine Welteroth as their new co-host. Along with Amanda Kloots, the award-winning journalist will join Sharon Osbourne, Sheryl Underwood, and Carrie Ann Inaba, on the CBS talk show when current co-host Eve‘s departure in January 2021. Here’s five facts you should know about Elaine, 33, before seeing her every afternoon on The Talk:

1. She ushered in a new era for Teen Vogue. Elaine became Teen Vogue‘s Editor-in-Chief in 2016, before the presidential election. Under her guidance, the magazine pivoted to presenting more content about politics and social issues, along with their fashion and beauty coverage. They became a prominent voice and praised for providing important content to a young audience.

2. She’s the youngest editor in Conde Nast’s 107-year history. When Elaine became Editor-in-Chief of Teen Vogue, she was just 29 years old — unheard of in the journalism industry. She was also Conde Nast’s second Black editor-in-chief across their brands, and was their first Black beauty director in 2012, when she worked at Glamour.

3. She’s a judge on the new Project Runway. Elaine joined the fashion show when it moved back over to Bravo with host Karlie Kloss. “I think it’s been cool to transform the legacy brand of Project Runway into something that feels really relevant for this moment, this time,” Elaine told Parade in April 2020. “It has just been such a fun ride. I’ve fallen in love with the designers, every time, without fail.”

4. She called hosting The Talk an “incredible platform.” Elaine released a statement after the ladies of The Talk made their announcement on December 1, writing, “I am beyond excited and grateful for the opportunity to join the phenomenal women of The Talk. They have each made me feel right at home alongside them on this incredible platform that cultivates connection, kindness and understanding when we all need it most. I look forward to learning from them and lending my perspective to conversations that build bridges in this singular time in our world.”

5. She’s an author. Elaine released a memoir called More Than Enough: Claiming Space for Who You Are (No Matter What They Say) in April 2020, co-written by her sister. The book won the 2020 NAACP Image Award for Outstanding Literary Work, and includes a foreword by director Ava Duvernay.