Elton John snub revealed: ‘It would be awful to be like Keith Richards’ 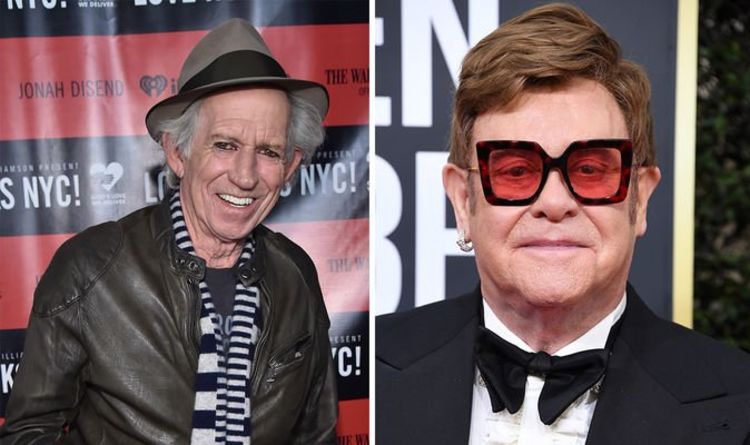 Elton’s feud with the guitarist spans several decades, after both the solo singer and the band rose to fame in the Seventies. Some believe their famous rift began when Elton outstayed his welcome while performing at a 1975 Rolling Stones concert in Colorado. Reportedly, the band invited him up to play on stage – but Elton stayed on for ten songs, dominating the spotlight and irritating Keith.

The spat turned public when Keith described Elton as a “lovely bloke” but “posing” in a 1988 interview with Rolling Stone magazine.

It then escalated when Elton released his elegy for the late Princess Diana, ‘Candle in the Wind’, in 1997. They were close friends and Elton performed the emotional song at her funeral.

Keith scorned the tribute, and said it was a “song for Dead Blondes”.

He added: “I’d find it difficult to ride on the back of something like that myself, but Reg [Elton’s birth name] is showbiz.”

Later that same month, Elton hit back with a stunning personal blow to Keith.

According to Rolling Stone magazine, the singer said: “I’m glad I’ve given up drugs and alcohol.

“It would be awful to be like Keith Richards. He’s pathetic, poor thing. It’s like a monkey with arthritis, trying to go onstage and look young.

“I have great respect for the Stones but they would have been better if they had thrown Keith out 15 years ago.

He also addressed the showbiz dig from Keith.

The ‘Tiny Dancer’ singer said: “Please, if the Rolling Stones aren’t showbiz, then what is?  You know, with their inflatable naked women.”

READ MORE: Inside ABBA’s legendary night out with Led Zeppelin

“After a few songs, it finally penetrated my brain that the expression on his face wasn’t really suggestive of profound musical appreciation.”

Elton said the guitarist looked at him “like someone who was about to inflict appalling violence on a musician who’d outstayed his welcome”, so he “quickly scuttled off”.

The singer also mentioned his delight when he beat the Rolling Stones in the charts in the summer of 1994 in his autobiography.

Reportedly, Keith was very disgruntled to hear the Rolling Stones record ‘Voodoo Lounge’ was pipped to the post by Elton’s song, ‘Can you feel the love tonight?’, which featured in The Lion King and secured the number one spot all summer long.