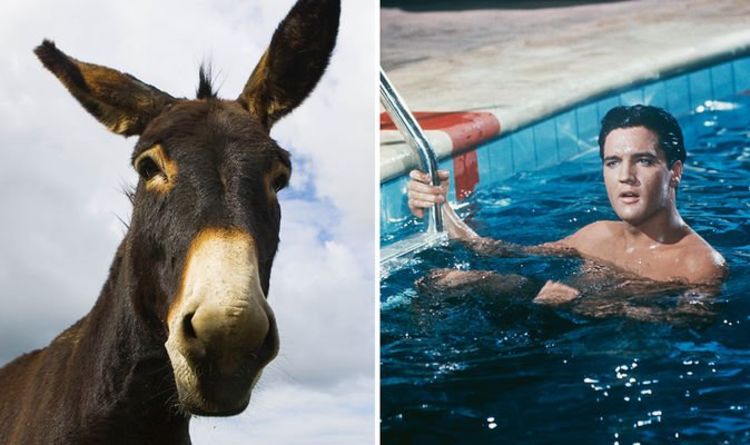 Back in 1957, Elvis Presley bought Graceland at the age of just 22-years-old and moved his family in. While he was shooting a movie in LA, his uncle Travis Smith helped oversee the move. The brother of Elvis’ mother Gladys Presley went on to become Head of Security at the property.

Elvis fans will know The King kept all kinds of animals at Graceland.

The King had dogs, horses, fish, cats, birds and peacocks – you name it.

But the star also had some donkeys and during the move the stalls and fences in the back of the property hadn’t been built yet.

However, the Graceland pool had been dug, so The King’s donkeys were lowered into the empty space for the time being.

READ MORE: Elvis Presley: Guess the ONLY movie he doesn’t sing on-screen in?

Elvis’ grandson, who was recently buried at Graceland, has his final resting place nearest the pool.

Benjamin Keough, The King’s only grandson, tragically died at the age of just 27-years-old this summer.

The first photos of Benjamin Koeugh’s grave have been shared by a fan account of his sister Riley Keough.

One of the photographs, allegedly taken on October 1, shows Benjamin’s chest tomb on the other side of the fountain from Elvis’ grave.

An inscription on the end, surrounded by flowers, has his full name: “Benjamin Storm Presley Keough.

His mother, Elvis’ only child, Lisa Marie Presley broke her silence on what would have been her son’s birthday last week.

The 52-year-old wrote on social media: “My beautiful beautiful angel, I worshipped the ground you walked on, on this earth and now in Heaven. My heart and soul went with you.”