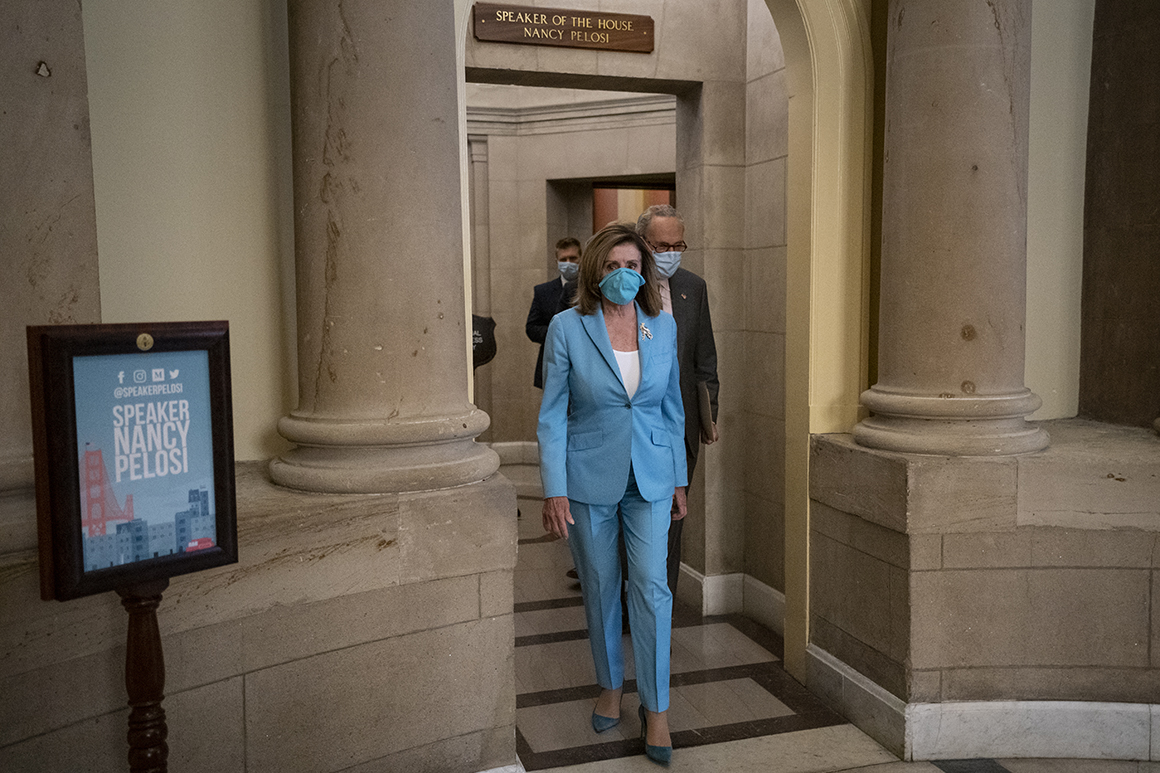 Pelosi has long been accustomed to wielding authority in Washington, and she’s completely comfortable as the only woman at a power table with a select number of seats. But this Pelosi, whom some privately call “speaker 2.0,” is different. Her second turn with the gavel shows a woman who seems to be relishing the job, guiding the House with an unencumbered and, at times, even brazen leadership style.

For the nearly 20 Democratic lawmakers and aides interviewed, the shift has been stark.

Pelosi has always had a self-possession that can elude even seasoned lawmakers. But two years ago, Pelosi was on her heels — fighting to win back the House as dozens of Democratic candidates openly rebelled against her leadership. Pelosi reclaimed the House majority and the speaker’s gavel, but not before methodically picking off her detractors one by one in the toughest leadership challenge she’s faced in years.

Since then, Pelosi hasn’t looked back: She has deftly faced down Trump during a 35-day government shutdown; fended off progressives salivating to impeach the president for months until Pelosi felt the moment was right; scolded Trump like he was a toddler in a now infamous White House standoff in October; and now schooled Republican negotiators in several rounds of coronavirus talks.

Republicans haven’t taken kindly to Pelosi’s power play in the recent negotiations, accusing her of holding up much-needed aid for political reasons.

“Pelosi has made the decision that it is in the political interest of the Democratic Party to have as many people out of work and home and broke as possible because they believe that’s how Joe Biden wins,” said Sen. Ted Cruz (R-Texas). “I understand why she’s doing that. I don’t understand why Republicans would facilitate it.”

Democrats assert that claim is nonsense, noting Pelosi shepherded a massive relief package through the House nearly three months ago only to have it ignored by the GOP-controlled Senate.

“I think leadership comes in having the confidence in trusting your own judgment and your own sense of effectiveness,” said Rep. Ro Khanna (D-Calif.). “She’s very confident in who she is, and she’s at the pinnacle of her career.”

Pelosi has also embraced being in the public eye to an even greater level, cooperating with two biographies on her this year and participating in 104 interviews on television and radio in the past four months alone as Democrats sought to counter Trump’s messaging machine.

“The lives, the livelihood and the life of our democracy. That is what we are having a discussion about,” Pelosi told reporters Wednesday after another meeting with Republicans yielded little progress. “I feel optimistic that there is a light at the end of the tunnel, but how long that tunnel is remains to be seen.”

Pelosi often talks of the future Joe Biden administration and House Democrats’ role within that world, leaving several Democrats to speculate that she has no plans to retire anytime soon. Pelosi hasn’t discussed her own leadership race since last January, according to those close to her. But everyone interviewed said there’s no doubt she’ll seek another term as speaker and this time, many speculate, she’ll run unchallenged.

Democrats close to the speaker say she’s made a concerted effort to be inclusive with all members this time. She’s held calls just with the freshman class, for example, and was working the phones for hours into the middle of the night in May to discuss Democrats’ coronavirus bill one-on-one with lawmakers.

But at the same time, Pelosi has slowly and deliberately consolidated power as speaker — with her close circle of trusted allies becoming smaller and more insular. Pelosi significantly expanded her leadership team this Congress, but that, combined with members stuck at home for months during the pandemic, has served only to empower her. Pelosi is better at letting her colleagues know what she’s doing, but fewer of them are actually involved in deciding what to do.

Part of Pelosi’s ability to execute her top-down leadership style is the favorable political landscape for Democrats. Not only does Pelosi’s House majority look safe, but Democrats are well positioned to add seats, win the White House and maybe even the Senate.

Another factor for Pelosi, according to several Democrats, is that she’s already seen the worst that can happen — losing the majority and the speakership when Democrats were wiped out in 2010 by the rising tea party furor. Pelosi held on then and went on to claw her way back into power in 2018, fighting off a pack of younger members aiming to extinguish her career in leadership.

This Pelosi is more moderate and protective of her most vulnerable members, learning lessons from her previous time as speaker, which included the disastrous decision to put a cap-and-trade bill on the floor that went nowhere in the Senate during President Barack Obama’s first year. In her second tenure as speaker, Pelosi has gone to great lengths to shield moderates from the most liberal demands of the caucus, dismissing ideas such as the “Green New Deal,” refusing to endorse “Medicare for All” and pursuing an ambitious North American trade deal with the Trump administration.

At times, the approach has drawn ire from the Democrats’ liberal wing, with members of the Congressional Progressive Caucus complaining this year that Pelosi didn’t go far enough to push their policies in pandemic relief bills. But in the end, only a single Democrat, Rep. Alexandria Ocasio-Cortez, has opposed any of the four packages that Pelosi has negotiated with Republicans. (Fourteen Democrats, mostly moderates, did vote against the House’s mammoth relief package in a nearly party-line vote in May).

And even through all of that, Pelosi still has some of the most progressive and outspoken members in her caucus — including “squad” members like Reps. Rashida Tlaib of Michigan and Ilhan Omar of Minnesota — welcoming her endorsement in tough primary races.

This latest round of coronavirus negotiations carries some of the highest stakes of her career, with trillions of dollars on the table, tens of millions of Americans out of work and a national economy that could take many years to fully recover, all of which is occurring just months before a presidential election.

After nearly a full week of meetings with GOP negotiators, it’s unclear whether a deal can be reached. Pelosi and Schumer left a nearly two-hour meeting Wednesday afternoon saying there was still no agreement.

Rep. Henry Cuellar of Texas, a moderate Democrat who’s watched Pelosi cut deals from Obamacare to the 2008 financial crash to coronavirus, expressed confidence in the speaker’s ability not only to get a deal but to outmaneuver the White House.

“If you’re going to look at a checklist, who has the advantage, who do we trust?” asked Cuellar. “I think we trust her more than Republicans trust the White House.”

Brendan I. Koerner Mike Postle was on another tear. The moonfaced 42-year-old was deep into a marathon poker session at Stones Gambling Hall, a boxy...
Read more

BT has quietly dropped all 5G mobile plans from its website. That means anyone who wants to sign-up to a new smartphone contract from...
Read more

james_peskett@tracker.gg (James Peskett) Superstar Korean boy band BTS are coming to Fortnite this weekend. Well this came out of nowhere! Epic Games has announced that the...
Read more