Newsnight host Emily Maitlis, 49, quizzed Prince Andrew at Buckingham Palace in November about his friendship with the now deceased sex offender Jeffrey Epstein. Following the controversial interview, the royal withdrew from public duties in the wake of the broadcast.

Emily, who has since been awarded network presenter of the year at the Royal Television Society Awards for her interview with the Duke of York, has opened up about the explosive broadcast.

Speaking in a new interview alongside programme editor Esme Wren, the pair discussed the moment they believed the interview would not go ahead.

“I was actually waiting for Emily to call me and say they’d pulled it or cut it short after ten minutes,” Esme told Radio Times.

“At the time, I felt like a father standing outside the labour ward waiting to hear news,” she recalled.

Fortunately, this was not the case as Prince Andrew sat down with Emily for an in-depth discussion.

The interview – which took a year to plan – was aired to viewers last year.

Emily admitted she knew her interview with Prince Andrew would be “explosive” within minutes of their chat.

“First, he was tackling the subject matter head on,” the Newsnight presenter said as an example.

The BBC Two host explained the “level of detail” within the interview was “unlike anything I was expecting”.

She added: “It was just astonishing to be in that room listening. I don’t think I’ll ever forget it.”

Emily is a main presenter on the news and current affairs programme on BBC Two and also covers elections for the corporation in the UK, US and Europe.

She first joined Newsnight in 2006, working her way up to be lead anchor of the programme following the departure of Evan Davis in 2018.

Following the interview, Prince Andrew announced he had asked the Queen for permission to withdraw from official royal duties for the “foreseeable future”, because the Epstein scandal had become a “major disruption” to the Royal family.

He said he deeply sympathised with sex offender Epstein’s victims and everyone who “wants some form of closure”.

The duke faced a backlash following the BBC interview about his friendship with the US financier. 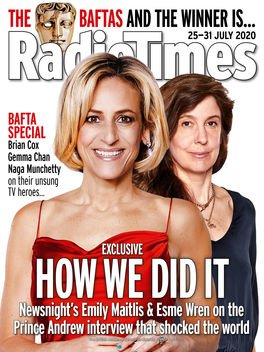 Meanwhile, the Duke of York was noticeably absent from the official photos of his daughter Princess Beatrice’s wedding to Edoardo Mapelli Mozzi on Friday morning.

Their wedding was confirmed by Buckingham Palace last week with two photos of the happy couple shared over the weekend.

Unlike other official photographs from royal weddings, the couple’s parents were missing from the snaps.

You can read the full interview with Emily Maitlis and Esme Wren in this week’s Radio Times out now.

BySarah Hearon Bravo, Bravo, f—king Bravo! Season 10 of The Real Housewives of Beverly Hills was full of firsts, but what does season 11 hold? Before...
Read more
Celebrity

BySamantha Wilson As the pandemic continues, stars like Jennifer Aniston and Ariel Winter are opening their homes to rescue dogs in need of a loving...
Read more