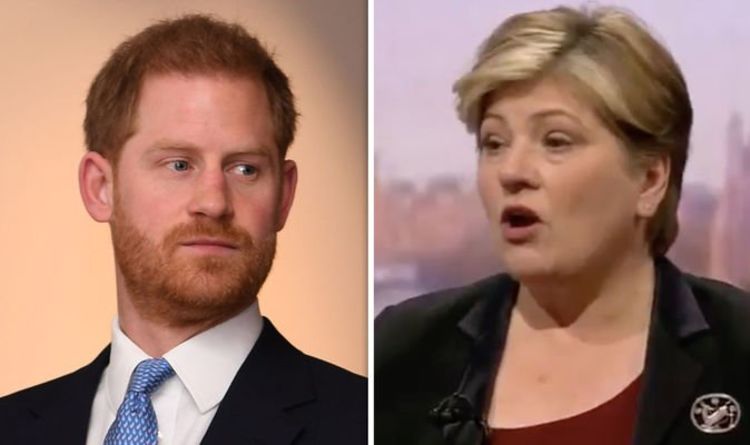 The Shadow Defence Secretary made the blunder while appearing on Sunday morning’s ‘The Andrew Marr Show’. She was discussing the topic of Harry and Meghan’s potential move to Canada and whether they should receive security funding from the British tax payer. Ms Thornberry said on the show: “I think the British taxpayer should pay for the security of Harry and Meghan and their family as they do with former ministers.

“Listen, Harry spent 20 years on the front line in Afghanistan doing many tours of duty.”

She continued: “He has done great service. I just hate to think what he must be thinking now, having used his instinct to try and defend our country.

“Now he has his much loved wife and his baby under the media scrutiny that they’re suffering.

“He as a man must be wanting to defend them and I understand that completely.”

She went on to defend the couples choice to move abroad.

Ms Thornberry said: “I also understand that a young couple really ought to be allowed to make their own decisions about what their future should be.

“If they decide they want to go to Canada of course they must always be protected.”

However, Ms Thornberry made a mistake during her defence of Prince Harry.

JUST IN: Fury as Thornberry claims taxpayers should protect Harry and Meghan

Andrew Hinchcliffe commented on her post: “Guess you went to the Dianne Abbott maths school.”

Rob Howland replied: “He didn’t spend ten years on the ‘front line’ in Afghanistan either.”

Chris Mansfield asked Ms Thornberry if she had “better things to do” on a Sunday morning.

Gary called the Shadow Foreign Secretary “thick as porridge” for her mistake.

One Twitter user posted: “That isn’t mis-speaking, its either lying or not knowing what you’re talking about.”

Claire Davidson shared: “I agree. But please, Mis-spoke? Can you not just say you got that wrong? Would that be so terrible?”

Some Twitter users defended Ms Thornberry and her mistake.

One social media user said: “Emily you’re a human being who can make mistakes. Ignore the hideous trolls.”

Another supported Ms Thorberry’s defence of Harry and Meghan.

Tweeted: “Of course they need protection more than most other ex-servicemen.

“They are targets of our enemies and an assassination of Harry would be a huge political coup for them.”

ByInternational Trade Secretary Liz Truss signed a free trade agreement with Japan worth £15.2bn, hailing it as the dawn of a new era of...
Read more
U.K.