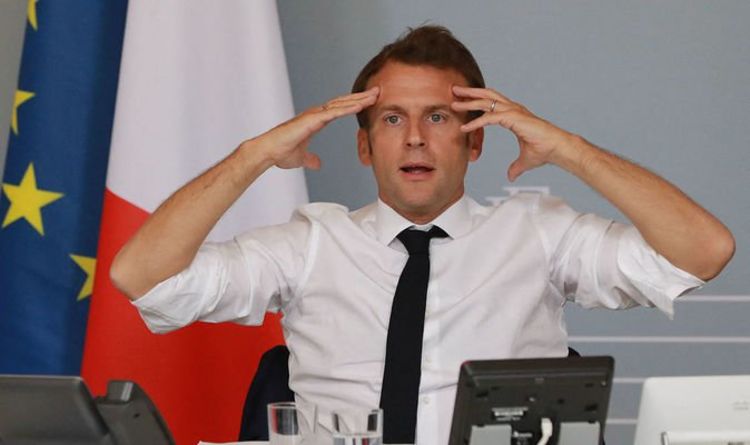 France, which is the fifth hardest-hit country in the world in terms of fatalities, is gearing up to gradually peel back a two-month national lockdown from Monday. The poll of 1,009 people, conducted on May 4-5 for newspaper Les Echos and Radio Classique, showed M Macron’s trust rating at 34 percent, down five percentage points from last month.

Sixty-one percent of respondents, for their part, said they had little or no faith in the 42-year-old centrist’s ability to solve the country’s problems, up four points from last month.

This chimed with another survey by Harris Interactive-Epoka also published on Thursday, which found that M Macron’s trust rating had dropped eight percentage points in one month.

The poll of 947 people, conducted on April 28-30 for LCI television, showed that just 43 percent of French people trust him to successfully handle the country’s problems.

France’s coronavirus-linked death toll reached almost 26,000 on Thursday, but rose less steeply than in previous days as the government confirmed it would soon start rolling back drastic restrictions on movement imposed on March 17 to restrict the virus’ spread.

The number of people who have died from COVID-19, the respiratory illness caused by the virus, was up 178 to 25,987, the lowest rate of increase in four days.

France has the fifth-highest coronavirus death toll in the world after the United States, Britain, Italy and Spain.

The Health Ministry said the number of virus patients in intensive care units fell by 186 to 2,961, below 3,000 for the first time since March 25. The number of people in hospital with the virus also fell again to 23,209 from 23,983, continuing an uninterrupted three-week fall.

After a more than 4,000 jump in new confirmed hospital cases reported on Wednesday, the increase sharply slowed to 629, for a total of 137,779.

Prime Minister Edouard Philippe confirmed later in the day that May 11 would mark the beginning of a “progressive” return to normality, ending almost two months of strict confinement.

He said that enough progress had been made in curbing the disease and supporting hospitals to begin loosening restrictions; but warned the lockdown would be reinforced if the spread of the virus accelerates again.

“We have always said that we would rather not have to, if possible, resort to that [a new lockdown] but also that, in the event that there was no other option, we would not rule it out,” he told a news conference.

Next week, about a million children and 130,000 teachers will return to school and most shops will reopen.

People will no longer need to carry a form to leave home, but papers will be needed for trips exceeding a radius of 62 miles, which will only be allowed for professional reasons, funerals or caring for the sick.

But some regions, including the Paris area, remain “red zones” with a more cautious deconfinement.

Cafés and restaurants may reopen from early June if the infection rate remains low.