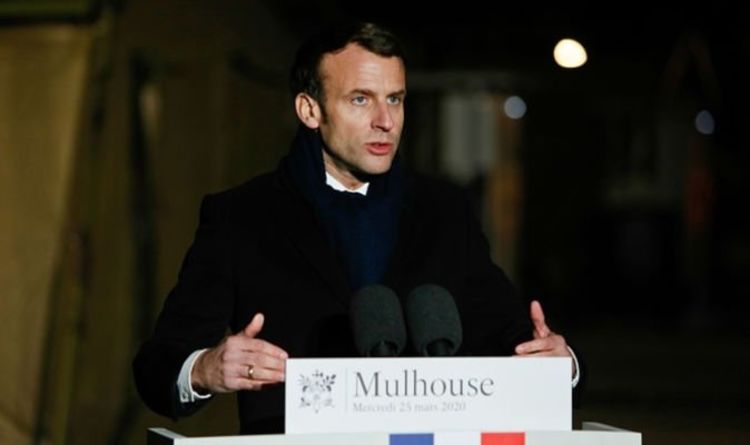 The survey of 1,000 people, conducted by pollster BVA for Europe 1 radio and Orange on April 4-6, found only 36 percent of the French approve of the government’s response to the deadly outbreak. Eight-four percent of respondents said they were worried about the economic impact of the crisis, including 45 percent who said they were “deeply worried”. More than half (51 percent) of those interviewed said they feared “the worst is yet to come,” according to BVA; while 30 percent said that the health situation appeared to be “stabilising”.

France will likely experience its deepest economic downtown this year since the end of World War Two – one far worse than the slump seen after the 2008-2009 financial crisis, Finance Minister Bruno Le Maire said later in the day.

Mr Le Maire told a Senate hearing by teleconference that the eurozone’s second-biggest economy would likely contract more than it did in 2009, saying: “This shows the magnitude of the economic shock we are facing.”

The Macron government estimated last month that the economy would contract by one percent this year, but has since indicated it would have to revise that figure.

With the French economy currently running at two-thirds of normal levels, each month of government-imposed confinement could knock 3 percentage points off of growth, according to the INSEE official statistics agency.

Some five million French workers have been put on furlough subsidised by the state to avoid mass permanent layoffs, according to the Labour Ministry.

France’s coronavirus figures on Monday showed the rate of increase in fatalities – now at almost 9,000 – sped up again after several consecutive days of slowing.

Health ministry data showed 605 people had died in hospitals in the last 24 hours – a new daily record – taking hospital fatalities to 6,494. The figure represented a 10 percent increase, up from six percent on Sunday and nine percent on Saturday.

Nursing home deaths – which currently account for about 27 percent of the total death count – rose by 10 percent to 2,417, bringing the total to 8,911, an increase of 10 percent on Sunday’s tally.

The number of confirmed infections increased by 5,171 within 24 hours to 98,010, meaning that France will likely become the fifth country, after Italy, Spain, the United States and Germany, to cross the 100,000 threshold this week.

A total of 7,072 serious coronavirus cases were being treated in intensive care units, a rise of just 1.3 percent from Sunday.

“The pandemic hasn’t stopped expanding. The figures prove it,” Health Minister Olivier Véran said. “We must keep up our efforts as citizens by staying at home.”

France started including data from retirement homes last Thursday, which partially explains why the official number of deaths has more than doubled since then.