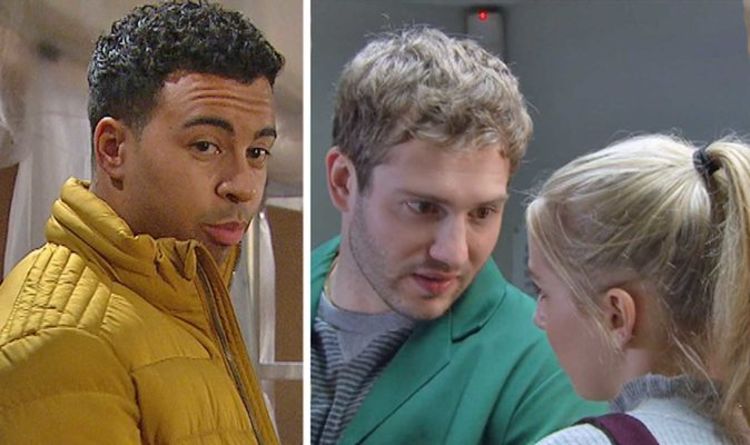 Emmerdale viewers are slowly piecing details together about the night Graham Foster (played by Andrew Scarborough) was murdered. The soap teased six potential suspects to kill the businessman, all with a different motive. Of course, a twist was in store for fans when it was in fact Pierce Harris (Jonathan Wrather) who savagely took Graham’s life. But what actually happened to those initially suspected that evening? Tonight, the events of Jamie Tate’s (Alexander Lincoln) evening were teased and it had something to do with Belle Dingle (Eden Taylor-Draper).

Marlon Dingle (Mark Charnock) is currently sitting behind bars after the police arrested and then charged him with Graham’s murder.

In scenes which aired earlier this evening, Rhona Goskirk (Zoe Henry) paid Marlon a visit, where he begged her to find out who was the real killer.

Obviously, many of the villagers are upset and astounded at the thought Marlon could’ve been accused of murdering Graham, and Ellis Chapman (Aaron Anthony) went to check up on Belle.

But before he entered Wishing Well Cottage, Jamie was already inside discussing what happened between him and Belle that frightful evening.

Jamie has been acting particularly shady since Graham’s body was found in the woods last week, especially given the altercation he had with Graham the day he died.

Understandably, he is a little on edge, but viewers are in the dark as to his real whereabouts that evening after he made a mysterious phone call during last night’s episode.

For weeks, Jamie and his wife Andrea Tate (Anna Nightingale) have been at each other’s throats, ever since Andrea’s secret night with Graham was exposed and Millie Tate’s paternity was questioned.

However, the pair seem to have united once more after Andrea gave Jamie an alibi – which she later clarified was simply to avert suspicion from him after he punched Graham.

“It’s done now, and if we do have to tell them the truth, lets just hope they believe us,” Belle added.

Worried for the implications Belle could face, a concerned and curious Jamie asked: “What about you and Ellis though?”

“If it happens, I guess I will just try and explain,” Belle said. “Tell him that it was a one off, something that should have never have happened – of that’s what you want?”

“I don’t know what I want right now,” Jamie replied honestly and they were interrupted by a knock at the door.

“You alright?” Ellis appeared. “Came to see how you were. All anyone’s talking about is Marlon – I knew you’d be upset so I didn’t think you should be on your own.”