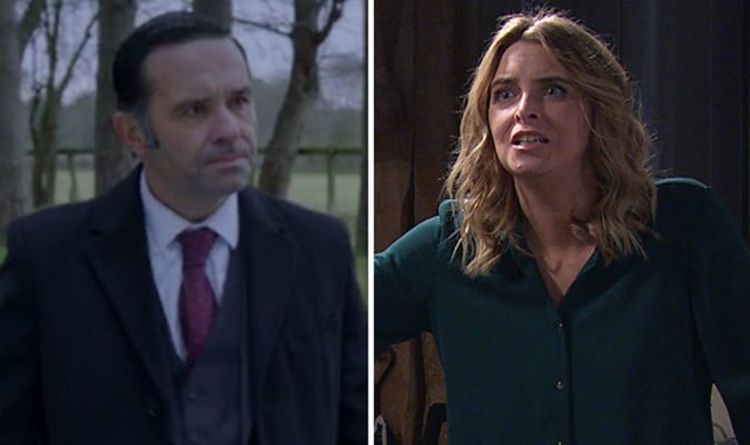 A week of high drama in Emmerdale will reveal who is responsible for the murder of Graham Foster (played by Andrew Scarborough), with the lead-up to his death replayed from different perspectives across the week. However, laser-eyed ITV soap viewers believe they have already worked out who is the killer.

Graham Foster has more enemies in the village than Kim Tate (Claire King) has zeroes in her bank account.

As Graham prepared to make his exit from Emmerdale to start a new life in France, he didn’t care who he upset along the way.

Whether that was threatening Ryan Stocks (James Moore) to clear Kim’s funds out as much as possible, or bullying Jai Sharma (Chris Bisson), Graham has been bent on reducing his Christmas card list.

Which means fury has been growing among the locals with plenty of residents infuriated by his attitude.

Graham’s murder has been teased as the work of one of several key suspects, all of whom have a reason to despise the smartly-dressed nuisance.

While some might see this as too obvious and as a list designed to throw viewers off the scent, some have spotted why one of the suspects will be unmasked as Graham’s killer.

Fans reckon Charity Dingle (Emma Atkins) is the killer, as Graham suffered a sickening blow to the head from a blunt object.

And Charity has been singled out by some for having “form” with that sort of weapon.

One viewer tweeted a video of Charity brandishing a large stick and hammering it to the ground, along with the caption: “Graham hit over the head with a stick/pole… Anyone else thinking… She’s got form.”

A fellow Emmerdale detective was straight to the point in their suspicions: “We see you Charity…”

Another fan pondered over Charity involvement, but at a distance: “With Charity screaming Debbie, makes me wonder if Debbie has something to do with Graham’s death.”

Viewers are also excited by the prospect of the marriage of Charity and Vanessa Woodfield (Michelle Hardwick), which is about to take place.

Although that wedding might not entirely go ahead, as one fan commented: “The most important thing is that it’s Charity’s turn tomorrow and Vanity almost get married.”

Could their ruined marriage plans be what cause Charity to snap and off Graham?