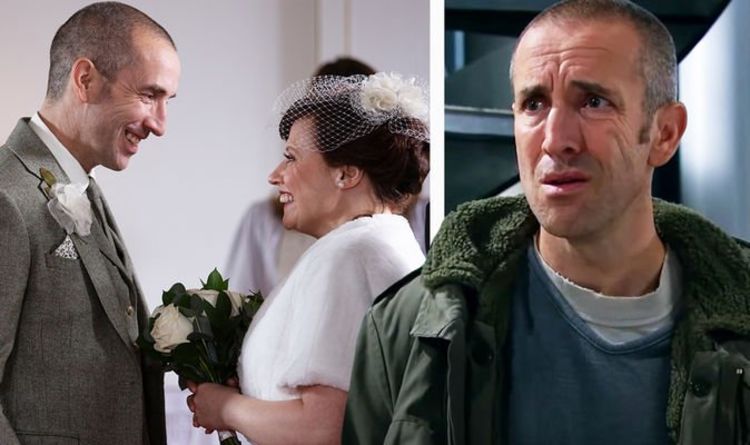 In amongst the village mayhem, there is a wedding to be celebrated; Sam Dingle (played by James Hooton) and Lydia Hart (Karen Black). In Emmerdale scenes set to air this week, the lovebirds will tie the knot in front of their nearest and dearest, but while the ceremony itself will be a happy occasion, it seems there is going to be trouble in paradise for the newlyweds in upcoming weeks.

Lydia arrived in the Dales in the September of 2016 and she instantly struck up a comfortable friendship with farmer Sam.

He however was still holding a candle to his first wife Alice (Ursula Holden-Gill) who had died from cancer in 2006.

After family members told him it was time he found happiness again and after a blessing from son Samson Dingle (Sam Hall), he decided to embark on a relationship with Lydia.

It then wasn’t long before she was moving her things into Wishing Well Cottage.

But one fateful month saw Lydia’s life on the line after an argument with Samson caused her to be admitted to hospital where a doctor noticed a possibly cancerous mole.

Lydia broke up with Sam temporarily, fearing she was going to hurt him and his son, but after getting the all-clear a few weeks later, they rekindled their romance.

Last year, Emmerdale fans saw Lydia’s past explored and it revealed she had a secret identity.

When an investigation took place into the human bones found underneath Hotten Academy school, Lydia’s life was turned upside down.

“I hadn’t thought beyond the birth, I thought I’d know what to do,” Lydia explained in a previous scene.

Tragically the baby boy was stillborn, and a terrified Jenny/Lydia held her son, wishing him to live before laying him to rest, wrapped in a blanket.

Ashamed and blaming herself for not attending any medical check-ups as the reason the child wasn’t alive, Jenny/Lydia boarded a bus and went to Scarborough, until a few years ago.

This heartbreaking secret didn’t tear Sam and Lydia apart, but it seems another dark secret could in upcoming weeks.