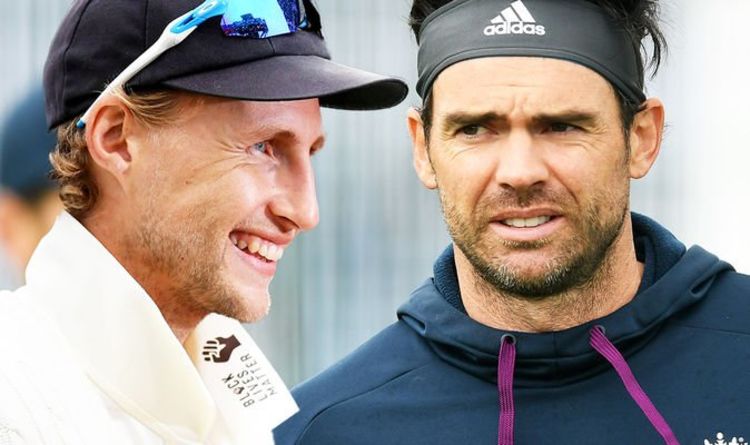 Joe Root has backed Jimmy Anderson to show the world he remains at the top of his game in the second Test against Pakistan. England’s leading wicket-taker admitted frustration had got the better of him after failing to hit the heights so far this summer.

But after the pair shared a heart-to-heart during the first Test, Root said he was confident a return to form for a “great of the game” is just around the corner.

“To question Jimmy’s ability and his record, you do that at your peril,” said the England captain.

“There’s a reason he’s got so many wickets over such a long period of time and I don’t think it will be long before he’s back in the wickets big time.”

Anderson admitted he was below par at Old Trafford after taking 1-97 in the match and his six wickets in three Tests this summer have come at a lumpy average of 41.16.

Root insists he has seen no dip in either work-rate or skill from the swing bowling icon.

“It would be very silly for us to write Jimmy off,” he continued.

“He’s still as dedicated as ever, he’s working very hard at his game and he’s been very good in practice.

“I don’t think it will be long before he’s got another five-for next to his name.”

Root confirmed yesterday that Anderson will get an immediate chance to right the wrongs of Old Trafford when England look to wrap up the series in Southampton.

He added: “That’s the way it goes and I feel with Jimmy we know it won’t be long before he’s back at the top and at the peak of his powers and I’m very much looking forward to seeing him perform this week.

“We had quite an honest conversation one of the evenings in Manchester and for him to get that off his chest and talk about it has definitely helped him.

“You don’t have to say too much to him, just more than anything remember what a great player you are and just be honest about where you’re at and how it’s coming out over a period of time.

“You know it can be a real struggle sometimes.”

Fast bowling legend Waqar Younis meanwhile says that teenage sensation Naseem Shah has all the tools to become the next big thing for Pakistan.

The 17-year-old quick made a decent first impression with pace and aggression in the first Test, consistently hitting speeds over 90mph.

And while bowling coach Waqar believes he has more to give when he improves his fitness, he says Younis can prove a match-winner this summer.

He said: “With Naseem Shah, he is very, very talented and he is only 17, he is still growing his bones are growing, but what a talent he is.

“I don’t think he really bowled as well as we expected in the first Test, but he can really bowl well and take the opposition on at times.

“Because he is young, he is inexperienced and it gets tough at times.

“He is one for the future, he is going to get stronger and fitter and will be able to bowl longer spells and will cause trouble to batsmen around the world.”