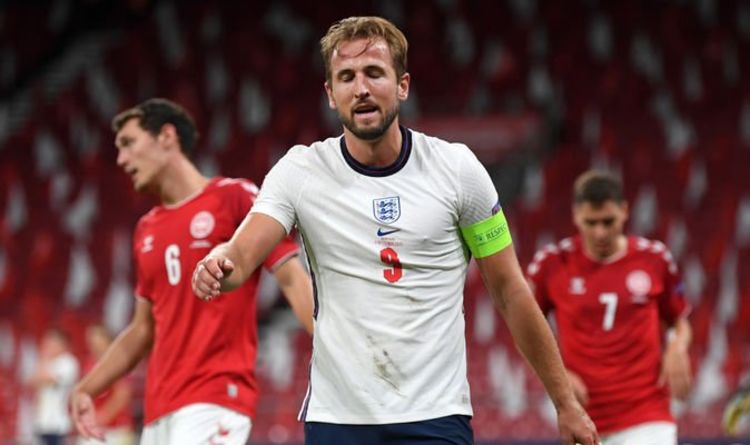 England were held to a dull goalless draw in Denmark in the Nations League on Tuesday night. Gareth Southgate handed debuts to Wolves defender Conor Coady and Leeds midfielder Kalvin Phillips from the start but fresh blood in the starting line-up could not prevent an underwhelming and insipid performance at the Parken Stadium.

The Three Lions were well below par in the first half and offered little attacking threat in a defensive-minded set-up which saw Gareth Southgate deploy two defensive midfielders in front of three centre-backs and Kieran Trippier out of position as a left wing-back.

England warmed up with around 20 minutes to go and Raheem Sterling forced a good save from Leicester goalkeeper Kasper Schmeichel in particular.

But despite substitutions, including third and fourth debutants in Aston Villa’s Jack Grealish and Arsenal’s Ainsley Maitland-Niles, the visitors could not find a way to break the deadlock.

Instead, they had to settle for a draw which leaves them two points behind Group B leaders Belgium, who thrashed Iceland 5-1 on home soil.

So how did Southgate’s charges perform in Copenhagen? Express Sport rates and slates the England players.

One of England’s more competent performers. A voice of calm behind his fresh-looking defence.

His pace meant he never really looked in trouble defensively but did so little with the ball.

A few little wobbles in the grip of early nerves. Did well but could face tougher tests at this level.

Showed he can play in a three as well as a four and kept a watchful eye on Coady.

England’s most adventurous player when those huge diagonal passes occasionally reached him.

It was one giant leap for a footballer and too much for him. Different after some top-flight games.

Improved as the game went on but in a key position his passing simply was not good enough.

Really felt hemmed in by playing on the wrong flank, checking back instead of bombing on.

Running at players he looked dangerous but his isolated skills need to be part of something bigger.

Occasional flourish but was not on the ball enough to do Denmark any real damage.

Needed somehow to link up play with the midfield but was solidly marshalled all night. Saw a late shot cleared off the line by Mathias Jorgensen.

Failed to add much more to the game than Sancho did.

Handed his debut off the bench but couldn’t make much of an impact.

Yet another debutant but only featured for the final minutes.