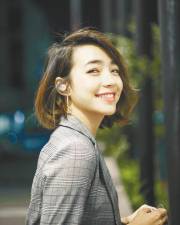 AN actress, a model and also a lawyer, 28-year-old Koe Yeet has been active in the Malaysian entertainment and fashion scene ever since she was five years old.

Starting off as a child actress and model in children’s fashion shows as well as commercials, Koe found further success as she got older by starring in a variety of screen projects such as the feature film Ah Long Pte Ltd, the web series Wind Chimes In A Bakery and most recently, the Singapore television series Titoudao: Inspired By The True Story Of A Wayang Star.

In 2016, Koe received a Bachelor of Law degree from the University of Reading, and advanced to the Bar Professional Training Course.

When asked what made her pursue law, Koe said: “Actually I didn’t want to be a lawyer. I wanted to be a dentist. After my A-levels I worked in a dental clinic for three months.

“I am the kind of person who likes to go out and speak to people, and not just be stuck in one room. After a few months I came crying to my dad and asked what am I going to do. He said why not try something that involves reading and talking, because I like to talk and I read a lot.

“I have been acting since I was young and I can memorise things quickly. I have a very good short term memory.

“My dad then said why not try law? So I tried it, I liked it and I pursued it.”

Koe said that she does plan to eventually practise law.

“In Malaysia, as an actress, our ‘life span’ is not as long as male actors. Plus, our platform is not as big as China’s. I think I was about 24 or 25 when I told my dad that I had a few years left before I was done in the Malaysian acting industry.

“If you want to be a lead actress in a local drama series, you have to be between 25 to 35. If you are above that age, you will rarely get picked to be the main actress. I am not sure if it is gender inequality; I think in Malaysia people don’t generally accept older women as the heroine of the show.

“So my dad said I needed a back-up plan. So I studied for the bar, and I was away for a few years. I was lucky that I got jobs when I came back.

But at that time, I felt I needed an education, I needed a plan.”

Considering the uncertainties in the industry now, one wonders if Koe feels that her dad was proven correct.

“The uncertainties are always there in whatever job you are in. I love acting so much, that I feel like I am willing to give five or six years to just focus on it.

“If it works out, great. I have had the best five or six years of my life. If it doesn’t work out, then okay, at least I enjoyed my journey.”

“I have been earning money for myself and I am just proud of it. It comes with risks, but I am really happy. I love acting, it is my dream job.”

When asked if she is looking beyond Malaysia to continue with her acting career, Koe said. “I have done a film in Taiwan, and a TV series in China, and a couple of China productions in Malaysia.

“It is not like I don’t want to go there, but you really need to know the right people to get into the China market. It is tough. I know people have succeeded. I don’t think I am strong or brave enough to go there without connections. I don’t have any connections right now.”

Taiwan and China aside, Koe feels that she hasn’t explored enough opportunites in Malaysia and Singapore.

“I just came in three years ago. I need to spend a couple of years to grow my roots before thinking of going further. If I get the chance, great. But I have to be realistic here.

“Maybe I will venture into screenplay writing. I do watch a lot of films. I do have a lot of thoughts. But not so soon. To be a scriptwriter or director, you need a lot of skills which I don’t think I am in a position to provide now. Maybe in the future.

“I won’t say no. I love acting, I love performing, I love singing. I think that it’s the applause that I enjoy. If you do something good and people love you for it, it is the best feeling ever.”

Plenty of news has been shared for next month and there’s plenty to look forward to for PS4 console owners. New PS Now games...
Read more