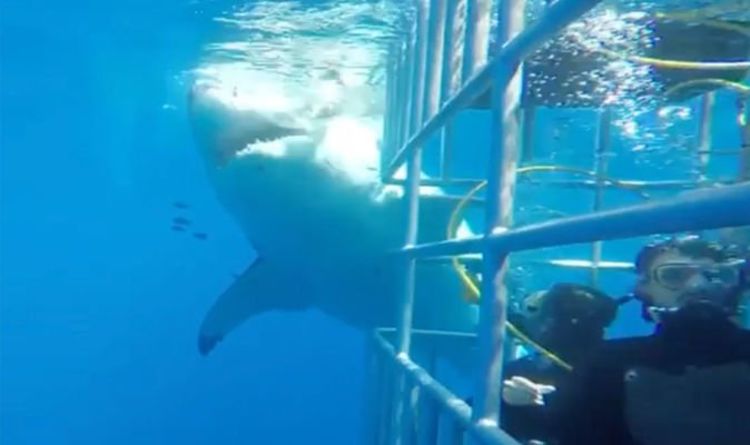 The shark, which can be seen to have a shredded fin, circled the two divers in the heart-stopping new online video which has since gone viral. The war-torn shark is estimated to be around 30 years old and is so large in diameter that one fan compared her to “megalodon” which was so gigantic that it actually snacked on other sharks.

The nail-biting clip shows the two divers waiting in the cage for something to appear when suddenly a great white shark emerges and lunges at a shredded piece of bait just meters from the divers’ faces.

Users of Instagram have been speculating how the shark obtained her injuries, the Instagram profile @creatures_of_the_deep where it was uploaded suggests it has come from previous fights.

“These old injuries will have come from both battles for dominance as well as resisting prey, and show how this girl earned her size and power. At some point, she even lost the top of her caudal fin!”

Other Instagram users have speculated where they think her wounds have come from.

One user said “ They are scars from mating”

A third replied: “From a boat?”

The footage was first posted by YouTube channel Shark Diver but has since gone viral after it was shared by creaturesof_the_deep on Instagram two days ago, with shark fans watching the clip more than 112,000 times.

Reports suggest the incident occurred in California, US.

The shark has garnered many online compliments for her appearance.

Fans have described “her” as a “beautiful animal” and another describing the shark as “Majestically Gorgeous”.

This appreciation comes as a report released declared that fish hooks are injuring a “shocking number of sharks”.

A new paper published in Fisheries Research shows that 38 percent of tiger sharks living near Tahiti, have at least one fishing hook stuck in them or show signs of having been previously been snagged by a hook.

A residual hook “can have profound consequences for those animals,” said Carl Meyer, a marine biologist from the University of Hawaii, in a press release. “It can injure or even perhaps kill them because they’re unable to feed properly after these interactions.”

Hooks made from degradable materials could alleviate the problem, according to the new research.