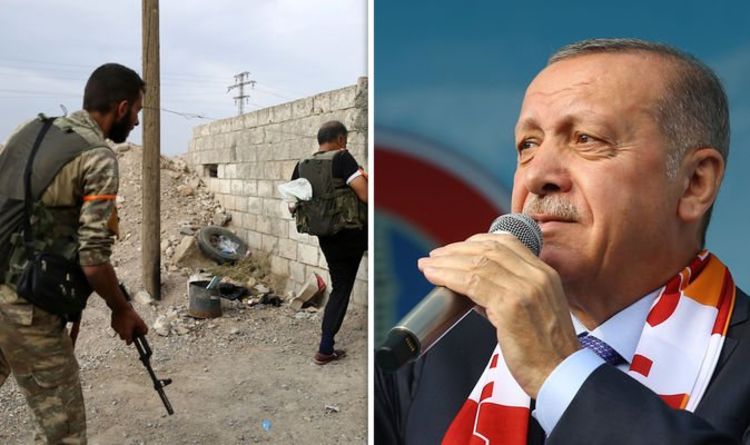 After a US intervention, Ankara agreed to pause an offensive for five days allowing the fighters time to withdraw. Mr Erdogan gave a speech in the Turkish city of Kayseri in which he said the fighters must withdraw in the 120-hour time period. He confirmed he will discuss the potential deployment of Syrian forces with Vladimir Putin but warned his Government would “implement its own plans” if an agreement was not reached.

Turkish backed fighters and Kurdish forces clashed on Saturday with some claiming the Turkish border was crossed and a village attacked.

Ankara’s Ministry of National Defence said it was “completely abiding” by the ceasefire agreement and was co-ordinating with Washington to ease tensions.

It also accused Kurdish fighters of carrying out 14 “attacks and harassments” in the past 36 hours.

There were fears that Turkey’s intervention could cause suspected ISIS fighters to escape detention but Ankara has claimed it has recaptured 41 who fled a camp earlier this week.

Kurdish leaders have claims Turkey has not fully abided by the agreement.

The Syrian Observatory for Human Rights has claimed Turkish backed fighters cross the border into Syria and entered Shakariya, a village east of Ras al-Ayn.

The Kurds claimed they broke out a week ago amid Turkish airstrikes and heavy clashes, attacking guards.

Turkey is a member of NATO.

The nation shares a border with Syria and has been opposed to the al-Assad regime during the Syrian Civil War.

According to the United Nations High Commissioner for Refugees, there are believed to be 3.6 million Syrian refugees registered in Turkey.

A poll conducted by Metropoll, found 75 percent of people in Turkey disapprove of the government polices towards Syrian refugees.

34 percent said they want them to return if the conflict continues.

The Syrian Civil War has been raging for eight years.

ByKanye West and Amber Rose, pictured at the 2009 BET Awards, are not friendly exes — and she says that's on him. (Photo: REUTERS/Phil...
Read more