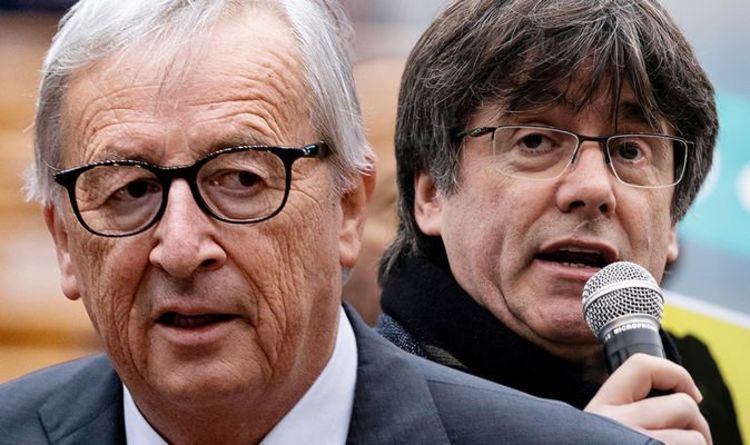 Clashes between police and protestors erupted in the city on Tuesday following the jailing of nine Catalan separatists leaders. Carles Puigdemont mocked the announcement and labelled it a form of oppression.

Speaking at press conference in Brussels, Mr Puigdemont said: “The ruling of the Supreme Court against members of the Government, Parliament and the most important social entities in Catalonia confirms the strategy of repression and revenge against all citizens who have sought the way of democracy to make their will possible.”

Moreover, commenting on the ruling, which condemns the leaders of the ‘Catalan process’, the former Catalonian President also hit out at the EU for its role .

Mr Puigdemont accused the EU of “shutting up” in the face of the violence that was seen on October 1, 2017.

He added: “This Europe dances to the sound of the Spanish State, which prevents the representatives of more than two million European citizens from sitting in the European Parliament.”

Ahead of general election on November 10, Mr Puidgdemont has called for non-violent demonstrations.

Although the former Catalonian President expressed his discontent for the ruling and the role that the EU, Brussels released a statement where it issued its support for the process of the Spanish government.

President of the European Commission, Jean-Claude Juncker insisted that he the “full respect” towards Spain’s “constitutional order, including the decisions of the courts.”

Regarded as internal matter by Brussels, Mina Andreeva, chief spokeswoman for the European Commission also insisted that the ruling must be dealt with by the Spanish government.

JUST IN: Spain protests: Why are people protesting in Catalonia and Barcelona?

“We are not letting that happen.”

Moreover, the minister for development issued a warning that the government would be “firm” in the face of any more attempts.

Following the violent clashes, health officials in the region reported that 37 protestors had been injured.

The violence n the region erupted following the jailing of Catalan separatist leaders who were jailed for between 9 to 13 years following the protests in 2017.

A Catalonian independence referendum was held in 2017.

The result revealed that the majority of voters backed independence although the reported turnout only stood at 43 percent.

Despite the result, the government in Madrid deemed the election as unlawful.

In light of that, separatist leaders attempted to declare independence from Spain on October 27, thus triggering a response from the government and the consequent civil unrest in the region.

As it stands, Mr Puigdemont is currently in residence in Brussels after he fled Spain where is accused of in-sighting a rebellion.