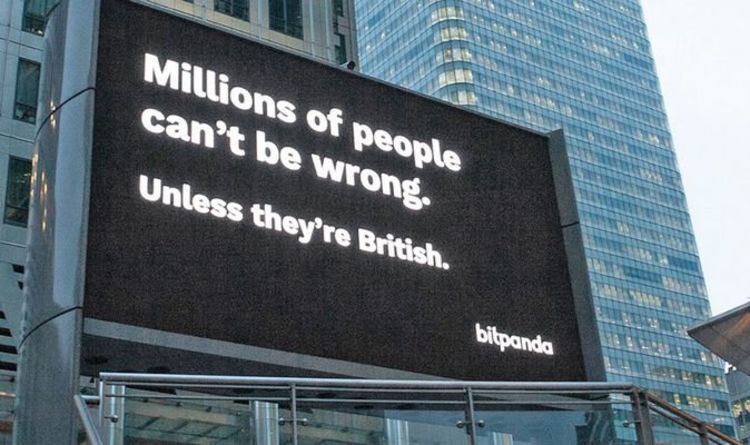 Two European technology firms have decided to use the advertising space to promote their businesses and mock Brexiteers for their decision to leave the EU. Paris-based firm Bitpanda and Vienna-based company Ledger both took out a seven metre by four metre digital billboards on January 31, the day the UK officially left the EU.

The advertising spaces are in various locations around the UK – including the financial district of Canary Wharf in London.

The digital adverts have appeared at 36 different sites around the UK on Brexit Day.

The adverts were rolling and included two messages.

One message read: “Millions of people can’t be wrong… unless they’re British.”

While the other read: “Let’s take back control, for real.”

Another one of the adverts has appeared in Brussels near the European Union building.

Ledger’s chief executive Eric Demuth has defended the advert, claiming that the design was intended to “make a point about bitcoin”.

The advert allegedly was supposed to make a comparison between Brexit and the crypto community.

READ MORE: Brexit latest: What does the EU ACTUALLY want from trade talks?

“We want to provoke people to think about the impact their vote has on their lives.”

He also declared that on a personal level, he thought Brexit was a “mistake”.

A Bitpanda representative called Ivis Buric said the company has received a “copy denial from media owners in London” from those who do not wish to use advertising with political connotations.

Mr Buric added: “Thankfully, there is still freedom of speech and advertising rules so we are live on location.”

Bitpanda’s Twitter account has posted a picture of their billboard in Canary Wharf with the caption, “It’s not me, it’s you”.